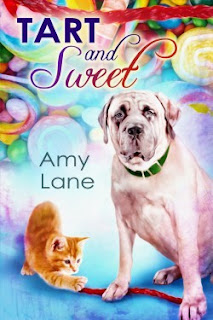 
In the Army, Robbie Chambers turned on his lover out of fear—and he hasn’t been able to live with himself since. Now he’s out of the Army but still trapped in the closet that brought on his most cowardly moment, and he starts to think he’ll never be able to fight his way free.

Until he sees Cy McVeigh. Beautiful and uninhibited, Cy is dancing on the boardwalk at Old Sac for no other reason than the moment called for it. Robbie not only joins in the dance but is smitten from the very beginning.

However, Robbie still has old business to clear up, and when he helps out a kid in need and comes face-to-face with the man he betrayed, he’s forced to come clean with himself. He can’t redeem his mistake if he’s still locked into his old patterns, and he won’t ever be worthy of Cy if he can’t earn Adam’s forgiveness. He’s going to need all the help he can get from the people at Candy Heaven in order to make things right with his past so he can have a future with Cy.

This is the fourth (and, I suspect, the last) book in Amy Lane's fabulous Candy Man series.

I fell in love with Adam and Finn in book 1 and didn't want anyone to spoil their happy. When Robbie, Adam's ex (The One Who Broke Adam's Heart), becomes Finn's unlikely hero, no one is more surprised than Robbie.

Because Robbie lives and breathes regret. He's sorry about being a coward. Sorry for not standing up to his racist, homophobic parents. Sorry for living a lie. And especially sorry for turning his back on Adam when Adam needed him most.

Except Robbie isn't a bad guy. He's just the guy who takes the easy way out. Until he meets Cyril.

Cy is graceful and doesn't live in shame. He's unabashedly bi and femme. He's a dancer and dance teacher who busses at a nightclub on the side (passion doesn't always pay the bills). And he's willing to give Robbie a chance, willing to forgive—even when Robbie can't forgive himself.


This book has many elements that make Amy Lane one of my favorite authors in the genre: strong writing; witty dialogue; complex characters; a sense of community (all the guys from the previous books play at least a small role in Tart and Sweet, so do NOT attempt to read as a standalone); humor; plenty of hot & steamy; and a HEA.

But something was amiss here, and I'm having a hard time putting my finger on what specifically bothered me.

For one, I didn't like the way Cy's character was portrayed at the beginning: grooving on the street, not a care in the world. Cy talks a little jive and moves his hips like he was born to it. This felt ... well, stereotypical.

Mind you, Cy is smart. He becomes Robbie's rock, and Robbie earns his redemption. (He has to put up with Finn's wrath, and that is no small thing.)

Robbie's parents are bigots (but NICE bigots, the ones who don't mind black people but think they all look alike; you know the kind). Fortunately, we get a glimpse of Robbie's parents in chapter 1 and don't see them again until the end, when Robbie's mom at least attempts to be good, and Finn orders cheesecake.

Because cheesecake solves all problems.

I loved Robbie, and I loved Cy, but I didn't necessarily love them together. I wanted to believe in them as a couple, the way I believe in Adam and Finn, or Ezra and Miguel. But I wasn't feeling it, not entirely anyway.

Even so, I enjoyed the story. I liked the friendship and the cats, and Adam and Finn's bigass dog. I liked Robbie's friends from work and the way Cy trusted Robbie not to break his heart. The epilogue was a nice touch. We can all breathe easy now, because these men will be okay. Pixy Stix never lie.