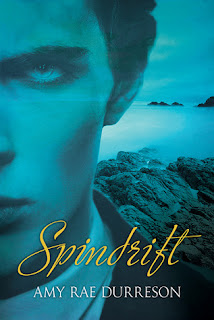 
When lonely artist Siôn Ruston retreats to the seaside village of Rosewick Bay, Yorkshire, to recover from a suicide attempt, he doesn’t expect to encounter any ghosts, let alone the one who appears in his bedroom every morning at dawn. He also doesn’t expect to meet his ghost’s gorgeous, flirty descendant working at the local museum… and the village pub, and as a lifeboat volunteer. But Mattie’s great-great-grandfather isn’t the only specter in Rosewick Bay, and as Siôn and Mattie investigate an ill-fated love affair from a bygone era, they begin a romance of their own, one that will hopefully escape the tragedy Mattie’s ancestor suffered.

But the ghosts aren’t the only ones with secrets, and the things Siôn and Mattie are keeping from each other threaten to tear them apart. And all the while, the dead are biding their time, because the curse of Rosewick Bay has never been broken. If the ghosts are seen on the streets, local tradition foretells a man will drown before the summer’s end.

Amy Rae Durreson's A Frost of Cares is one of my favorite books of the year. This author knows how to tell a ghost story.

Siôn leaves London to recuperate. He paints but doesn't consider himself an artist. He's lonely and sad, and desperate for something to give his life spark. He finds that something in Mattie, a local boy full of charm and charisma.

Mattie is 21 to Siôn's 30. While Siôn is quiet and withdrawn, Mattie is affable, outgoing, and brimming with life. And he flirts with Siôn like crazy every chance he gets.

As Mattie and Siôn begin a tentative relationship, they realize something sinister is at work. Mattie's great-great-grandfather, Matthew, and his lover, Joshua, begin to haunt the men.

Matthew's ghost appears every morning apologizing to his dead wife and calling Joshua's name. Joshua's bloated body crawls out of the sea, stinking of seaweed, and with him comes the fog. Joshua stares through windows and writes Mattie's name over and over. Is it a warning or a threat?


The ghosts in this story are very much present; they have a history. They were men once too, full of lust and love and hope.

Mattie and Siôn's story runs parallel to that of Matthew and Joshua. Both MCs have secrets they hide. At one point, Mattie pulls away and runs. He acts like a child, and I was furious with him. Siôn doesn't lash out in anger, though; he loves Mattie, loves him so much he's not willing to walk away.

I liked the sense of community in this small Yorkshire town. Siôn realizes that to make friends, he needs to give others a chance. So he talks to people, paints landscapes and dogs. He hangs with the locals, and he likes it. Mattie's teenage cousin, Caitlyn, is one of the locals, and she's a great secondary character: smart and sassy.

I have to say that I was VERY disappointed by the lack of steam in this book. All the sex scenes are fade to black; there's one that begins on page, and then ends abruptly with a sigh and a murmur. I will never understand why authors who write romance shy away from steam. Sex is part of romance; it's part of life. It's human, and it's beautiful. Keeping it hidden makes it weirdly shameful, like it doesn't belong.

We are told Mattie and Siôn have so much passion, but I for one didn't really SEE that. I loved the tenderness between the men, the way Mattie's family just accepted Siôn, but I needed MORE.

The epilogue is set just a couple weeks down the road and feels fragile. The story ends with a strong HFN, maybe a tentative HEA if you're an optimist.

I wanted to believe in these MCs. They went through so much together: a near tragedy, two ghosts, Siôn's ennui, and Mattie's shame. I was rooting for them, and while the story made me shiver, it also made me smile.

Amy Rae Durreson writes brilliant prose. I was wrapped up in the plot. And for a few hours I believed in ghosts. That's saying something.