ARC Review: Lord of a Thousand Steps (Love in Laguna 4) by Tara Lain 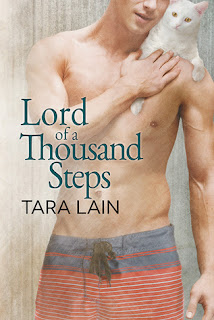 
To architecture student Ian Carney, family means everything. Taken in by his brother, Jim, when his father threw him out at eighteen for being gay, Ian yearns to create his own family with his boyfriend, Rico. But Rico’s in Mexico caring for a sick father, Ian hasn’t had sex in a month and a half, and his gorgeous boss, Braden Lord, CEO of the architectural firm Ian interns for, is looking better and better.

Braden’s life is chaos. Just out of the closet and going through an ugly divorce from his wife of fifteen years who’s trying to take custody of his two children, he desperately resolves not to succumb to a completely inappropriate attraction to Ian—even though his kids adore both the man and his crazy cat.

When Rico proves to be a snake in the grass and Ian exercises his powers of seduction, what starts as a “friends with benefits” fling turns into real life real fast. Can Ian give up his romantic dreams for an “old guy” who didn’t come out until he carried a mountain of baggage? It’ll only take a thousand steps.

I read the first book in the Love in Laguna series, Knight of Ocean Avenue, and LOVED it. But I skipped books 2 and 3 because the blurbs didn't grab me. Now I wish I'd read at least book 2, as Jim and Ken, the MCs from Knave of Broken Hearts, are very present in this story. Jim is Ian's older brother, the one who took him in when their wealthy, homophobic father kicked Ian out after Ian told him he was gay.

Ian is only 21 and has been dating Rico for three years. At the beginning of the book, Rico returns to Mexico City to support his ailing father. Ian, an architecture student, pines for Rico, even as he feels drawn to his hot-as-sin boss Braden Lord, who's fifteen years his senior.

When Rico turns out to be a supreme tosser, Ian is shattered, but he realizes he's more upset about losing the IDEA of a perfect relationship than the relationship itself.

I loved Ian. He really just wanted to belong to a family and have the kind of love he saw between Jim and Ken, who were amazing at making Ian feel included.

Braden is going through the divorce from hell. After fifteen years of being trapped in a loveless marriage with a vile, money-hungry woman, he's finally come out of the metaphorical closet and is ready to live his life. He just doesn't want to lose custody of his children: 14-year-old Jo-Jo (short for Joseph) and 5-year-old Mireille.

I am not a fan of kids in stories, but I liked Jo-Jo and Mireille, even if Mireille was a bit too precocious. (I know a lot of bright 5-year-olds, and none of them talk like a 50-year-old proper British dame.) But Mireille falls in love with Anderson Cooper, and then with Ian.

Why, YES, Anderson is a feline: a fat, white cat who rules Ian with an iron fist (not really, but he does like to hang at the beach and roll in the sand).

This book is exceedingly readable and full of cute moments. Braden and Ian don't really get together until the halfway mark (when Ian literally pounces on Braden), but they work together and talk, and Ian proves to be a fantastic listener.

Thankfully, Ian isn't a chuffer but a talented designer who becomes a favorite of Braden's new client (a woman who knows her mind and sees the good Ian can do, in more ways than one).

There are no crazy plot twists; the divorce melodrama isn't overwhelming, even though I did want to throttle Braden's ex-wife; and the relationship angst is fairly minimal.

Mostly, Ian feels he's out of Braden's league, and Braden think he's too old and used up for Ian. Fortunately, Braden realizes he can't let Ian go, and Ian tells Rico the Rat where he can shove it.

My one complaint is that the steamy moments were brief and slightly rote; I wanted more teasing and sensual play, especially since Braden was new to man-on-man lovin'. There is talk of Braden bottoming, but it never happens, which. WHY? It's an outrage, I tell ya, an OUTRAGE.

The HEA is pretty great, though. The sense of friendship and family made my heart melt, and when Mireille mentioned Anderson being an usher, well . . . I was a GONER.

P.S. This book can be read as a standalone.

People say that life is the thing, but I prefer reading.