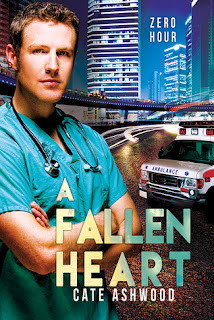 
After his last disastrous relationship, Joseph Ford has absolutely no interest in getting attached again. Concentrating on working as a trauma nurse and keeping his life as simple as possible are his only goals. Unfortunately, his plans could be derailed by the charming, sexy Nash.

Things are looking up for paramedic Ridley Nash when he transfers to Station 217. He gets along with the crew, likes his partner, and is finally on a team willing to accept him—gay and all. It’s everything he’s always wanted, but when he meets Ford, Nash knows his life is about to get very interesting.

As Ford and Nash find themselves stuck in the middle of a homicide case, things become more complicated. For the last year, the mutilated bodies of teenage boys have been showing up all over downtown. With no leads, the police are getting desperate. One of the victims is found alive, and he’s the best chance the police have to catch the killer—if only they can get him to talk.

Will Nash be able to catch Ford when he falls, or is there too much standing in their way to make it work?

I loved the first book in this series, A Forced Silence, and I was so looking forward to Nash and Ford's story.

While I liked the fast-paced plot, the plentiful steamy times, and the camaraderie between this group of friends, I found Ford to be immature and whiny, and I hated the epilogue with my heart and soul.

Nash is a paramedic and Adam's new partner. Nash is hot (but of course), kind, patient, and a warrior in bed. Nash is pretty much perfect. He has to be to put up with Ford.

Ford, Sam's best friend and ER nurse, hasn't been in many relationships. The last one was with a psychotic douche nozzle who treated him like a dirty secret and would barely touch him during sex. Because said ex was emotionally abusive, Ford now believes that all his relationships are doomed to fail.

Nash doesn't hide the fact that he's into Ford, but Ford sends mixed signals. He jumps into bed with Nash, then pulls away. The men get serious, to the point where they don't use protection, but the next minute Ford is all, I can't do this; I'm losing myself in you. Then he throws a big ol' pity party and drinks tequila. Dude, grow the hell up.

The plot of the serial killer who tortures young boys continues. Adam and Nash are first responders to a churchyard where a 13-year-old boy named Joel is holding his already dead friend. Joel is in drug withdrawal and shell-shocked, but he bonds with Ford, who checks up on him even after Joel is no longer his patient.


Joel's suffering and abuse broke my heart, but I didn't love how the mystery plot played out. Just like in the last book, we are led to believe that the killer has been caught, only to discover in the "epilogue" that the joke's on us.

By definition, an epilogue brings closure to the story; it doesn't open up a can of worms and leave readers with their metaphorical dicks hanging out. For fuck's sake, if you must end a book with the cliffhanger from hell, do it, but don't call it an epilogue!

I'm torn because I really enjoyed this story for the most part. It was a gripping and sexy read.

I loved seeing Adam and Sam again; I laughed at Caleb and Rob's antics. I downright devoured the steamy bits (that scene in the supply closet? Come to mama). I adored Nash (the man brings pizza and makes hiking an *ahem* orgasmic experience). Ford ... well, Nash loves him and he was good to Joel, so I'm not going to hold a grudge.

The romance was sweet, and the men got a tentative HEA, which YAY! But the ending? The ending downright sucked. It especially sucked because we have to wait months for book 3, and I want it now. Right the fuck now.

P.S. This book cannot be read as a standalone.