Hi! Kim Fielding here, and I’m excited to announce that my newest novel, Staged, is available now from Riptide Publishing.

I wanted to write a blog entry that was clever and funny and perfectly related to my new book, but you know what? It’s currently 104F here. Not only that, but it’s been at or above 100F for several days and the forecast says we’re bound to continue that way for the foreseeable future. They’re saying 108F tomorrow. It’s too hard to be clever, funny, and topical when it’s this hot.

Okay, yes, I’m sitting inside my air conditioned house. If I were to venture outside, the humidity is only 15% and there’s a slight breeze, meaning it would feel more like a convection oven than hot soup, and tonight we should drop into the upper 60s. I have a swimming pool, which would probably feel wonderful right now—but I can’t go in because of a new tattoo on my leg. I’m not supposed to soak it for a few more days.

Eventually I will have to go outside for my daily walk. Then I will feel sorry for myself, and when I get home, I’ll point out self-righteously to my family that even though it’s hot, I exercised and they didn’t. In the meantime, I’m sipping black currant iced tea.

One of the good things about living where I do is that even when we’re baking, I know I could get in the car, drive 100 miles, and be in San Francisco where highs will be in the mid 60s. Doesn’t that sound lovely? And if I’m really lucky, fog will roll in through the Golden Gate, blanketing the city and making everything drip with moisture. And I’ll be comfortable and happy and will walk those hills all day—until eventually I have to return home. I strip off layers of clothes during the drive home.

You know who else appreciates San Francisco weather? The main characters in Staged, that’s who. Most of the book takes place there, and Sky and his master can jog in comfort or slouch around town in hoodies and jeans. They will not be sweltering.

I hope whatever the weather where you are, it’s reading weather. I recommend a book and frosty beverage if your temps are like mine, and a book and hot tea if you’re chilly. Find somewhere comfortable to curl up. And enter Sky Blue’s world, where things are not what they seem. 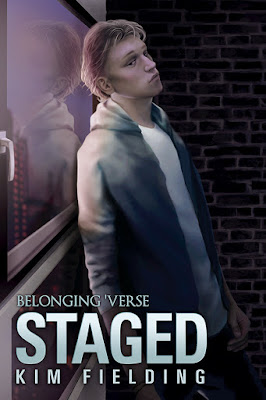 Once the second-prize winner on My Slave’s Got Talent, Sky Blue has spent the past few years singing at a failing New York nightclub. While Sky has never had control over his fate, his life seems to take a turn for the worse when he’s torn from the familiar comfort of performing and sold to a rich and enigmatic man.

Morgan Wallace takes his newly purchased slave to San Francisco, his intentions unclear. On the one hand, he treats Sky with more kindness than Sky has ever known—treats him like a real person. On the other hand, he shares Sky at parties hosted by his sadistic new friends.

A confused slave is an endangered slave, and Sky isn’t even sure of his master’s real name. Is he Morgan Wallace, wealthy and cruel, or Mackenzie Webster, caring and compassionate? Caught between hope, fear, and an undeniably growing attachment, Sky struggles to untangle which parts are real and which are merely a performance. His future, his heart, and even his life may depend on it.

Kim Fielding picked up a pencil when she was three years old and never put it down. She always dreamed of becoming an author, but took a roundabout way of getting there, first spending an inordinate amount of time as a student and ending up with a law degree and a PhD in psychology. She wrote plenty of academic articles and even a few books, but fiction continued to call to her. One day, she finally put that pencil to its intended use again and began to write novels.

After having migrated back and forth across the western two-thirds of the United States, Kim calls the boring part of California home. She lives there among the cows and almond trees with her husband, her two daughters, and her day job as a university professor, but escapes as often as possible via car, train, plane, or boat. This may explain why her characters often seem to be in transit as well. She dreams of traveling and writing full-time.

To celebrate the release of Staged, one lucky person will win a $25 Riptide gift certificate and a copy of Treasure by Kim Fielding in audiobook. Leave a comment with your contact info to enter the contest. Entries close at midnight, Eastern time, on July 23, 2016. Contest is NOT restricted to U.S. entries. Thanks for following the tour, and don’t forget to leave your contact info!