Blogtour: The Silvers by JA Rock 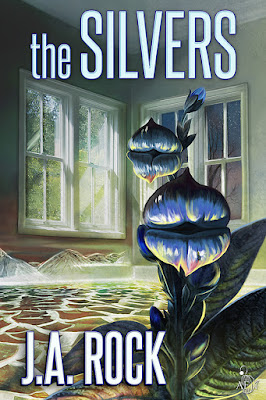 What humans want from the Silver Planet is water. What they find is a race of humanoids who are sentient, but as emotionless and serene as the plants and placid lakes they tend.

B, captain of the mission, doesn’t believe that the “Silvers” are intelligent, and lets his crew experiment on them. But then he bonds with Imms, who seems different from the others—interested in learning, intrigued by human feelings. And B realizes that capturing, studying, and killing this planet’s natives has done incalculable damage.

When a fire aboard B’s ship kills most of the crew and endangers Imms, B decides to take him back to Earth. But the simplicity of the Silver Planet doesn’t follow them. Imms learns the full spectrum of human emotions, including a love B is frightened to return, and a mistrust of the bureaucracy that wants to treat Imms like a test subject, even if they have to eliminate B to do it.

Hi! I’m J.A. Rock, and right now I’m touring the internet talking about my latest release, The Silvers. Thanks so much to the blogs that are hosting me on this tour, and be sure to leave comments on the tour posts for a chance to win a $15 Riptide Publishing gift card!

One of the themes I find myself coming back to again and again in my work is the idea of a family of choice. I have a lot of characters who end up sort of building their own families, or being adopted into other people’s families. This probably scares my mom, who assumes that any themes I repeatedly address in my writing are indicative of some deep-rooted struggle within my own life. So I’ll just clarify that my blood family is amazing and that I want for nothing family-wise—but that I’m also fascinated by the way we build families from people we meet all throughout our lives.

In The Silvers, family is a nebulous concept to Imms, whose species doesn’t really form close ties based on love and loyalty. The Silvers have clans, but if they display unity, it tends to be for practical and/or survival-based reasons. But when he comes to Earth, he becomes attached to B’s family, and in some regard, feels more secure with B’s mother and sister than he does with B.


For B, family is complicated. His POV is more guarded, less frank than Imms’s, but B does let us know that he’s never quite felt at home with his family. That part of the reason he went on the mission to the Silver Planet was to escape a world full of people he could never quite connect with—including his mother and sister. He has several moments where he questions why he’s drawn to Imms—wondering if it’s some sick thrill at having “tamed” a foreign creature, or if there’s something addictive about Imms’s apparent innocence. B’s love for Imms has some less-than-savory components, but I think at the core there’s a genuine need on B’s part to love someone who doesn’t know his past, won’t judge him for it. Yet he discovers that building a new home and a new life doesn’t erase where he came from—and that in order to have a meaningful relationship, he has to go deeper, share more of who he is.

One of the most fun things about writing The Silvers was watching B, Mary, Bridique, and Imms become a family, and playing with the different relationships they have with one another. I call this book a love story and not a romance in part because it’s about a lot of different kinds of love. It’s about bonds that endure through the characters’ failures and shortcomings, even if those bonds alone aren’t always enough to rescue, protect, or fulfill these people.

J.A. Rock is the author of queer romance and suspense novels, including By His Rules, Take the Long Way Home, and, with Lisa Henry, The Good Boy and When All The World Sleeps. She holds an MFA in creative writing from the University of Alabama and a BA in theater from Case Western Reserve University. J.A. also writes queer fiction and essays under the name Jill Smith. Raised in Ohio and West Virginia, she now lives in Chicago with her dog, Professor Anne Studebaker.


To celebrate the release of The Silvers, J.A. Rock is giving away $15 in Riptide Publishing credit. Leave a comment with your contact info to enter the contest. Entries close at midnight, Eastern time, on July 16, 2016. Contest is NOT restricted to U.S. entries. Thanks for following the tour, and don’t forget to leave your contact info!