Blogtour: Settling Down by Nicole Forcine 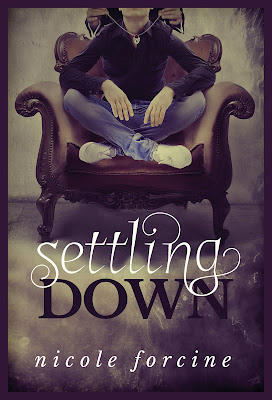 It’s been six months since Tim and Jae got together, and they’re giving Domestic Discipline an honest try. But when conflicting events conspire to interrupt their life, Tim starts to fray at the edges. He’s doing his best to handle everything, but he still struggles with unaddressed issues, both past and present. And seeing Tim trying to hold it together is breaking Jae’s heart.

There has to be a breaking point, and when it arrives, it’s Jae’s turn to take the reins, to provide them both with what they truly need.

There’s safety classes and the like at the SK, and even a touch of controversy when a charter school decided to have a field trip there with students as young as 11. Now, I’m downright cool with teaching kids about not just sex but pleasure, but apparently the rest of my local community disagreed. I’m not sure how Tim would handle a similar issue, but whatever he decided, it would be with grace.

Hell, maybe he’d take his knowledge to the school instead. But this is Tim we’re talking about, there might even be some controversy in even that.

In my mind, Little Earthquakes the store is a bit bigger than the storefront that is SK, and there’s a much larger kink section. And of course, the latex anything is carefully wrapped as not to kill the poor owner. The place is just as well lit, and the staff has heard of everything. As Tim put it in Shaken Up, “We don’t do shame here”. There’s also the apartment above that Tim calls home, oddly cramped for even one person, but it’s his.

Speaking of Tim himself, there’s a touch of the Savage Love and Sex is Fun podcast hosts in him, as a gay man who gives advice as well as sell awesome vibrators and/or cock cages. I’ve been interested in sex advice columns for damn near forever, and while I don’t listen to Savage Love anymore, I still respect the art of giving good, knowledgeable advice. Tim takes pride in sharing what he knows, and learning more to share more, to help people have great sex, whatever that means in their minds.

With a big ol’ smile and some genuine Southern kindness.

Nicole Forcine was born a strange child and former Georgia peach. When she was younger, she was never far from a composition book, a pen in hand, and way too many people in her head (she’s even been known to talk back to them). When two or more of them talk loud enough to overshadow the rest, a story is born. After years of writing and storing her tales in those books, she had a revelation: man, there are a lot of dudes kissing in these stories. Her stories include themes of creating families of choice, how love can come in all forms and supersede all boundaries, and the joys and sorrows of earning a happily-ever-after. Currently, she resides in Minneapolis with one of the most laid-back men in history and his even more laid-back cat. When she’s not writing (ha!), she’s saving the world/galaxy/humanity as we know it in the world of video games and general geekiness.