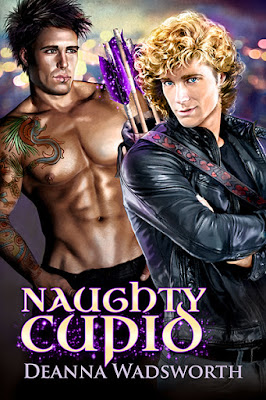 The name’s Lio, and you may have read the beginning of my story in A Cupid’s Wager. Well, hold on to you hats, because there’s more to tell about your favorite cupid working in the Gay Division of the Inter-Dimensional Association of Cupids.

Remember Ethan? That Aztec god of the winds who busted me shooting a closeted human with a gay lust arrow? Yeah, I haven’t been able to forget him either. Even though I have a rule against getting it on with other supernaturals—especially ones working for the Straight Division—my magic is drawn to Ethan and all his tattoos and piercings in a way I cannot control.

But after that night of mind-numbing sex, now I gotta face my evil ex-boyfriend and a suspension by the IDAC for “misplacing” arrows. They took my quiver, and I have to figure out how to get my arrow privileges back before they’re taken forever.

Ethan seems to think he can help me, but I don’t know how anybody can make this cupid believe in love again.

“You know the lust arrows only work if the person’s mind is open to it. I shot Raymond with a Class 4 gay lust arrow. They only have a little more juice than a few tequila shooters. They can’t make a straight man gay.”
“But that is what you are trying to do,” Ethan shot back.
“You know it doesn’t work that way.”
To prove my point, I materialized one of my long purple arrows.
Without warning, I stabbed Ethan in the heart with it.
“Oww!”
The arrow exploded in a burst of light and glittering purple dust, the blast blowing our hair back.
When the magic cleared, the stunned expression on Ethan’s face cracked me up. “Now, do you spontaneously wanna suck my cock?”
He gaped at me like I’d lost my ever-lovin’ mind. “What did you do that for?”
“Don’t get your panties in a wad. Class 4G lusts can’t make someone gay. You’re born that way. There’s even a Lady Gaga song to prove it.”
His big hand rubbed where I’d hit him. “You should not have done that, Lio. You have no idea what you just did.”
“I already shot an unauthorized arrow tonight, what’s one more? Besides, unless you’re gay, it won’t affect you.” I waggled my brows. “So what are you so worried about? Got sumthin’ you wanna confess?”
He actually growled at me.
“Build a bridge,” I told him. “If anyone has a right to be pissed off here, it’s me. The gaydar says Raymond is gay, yet you asshats over in SD decided to shoot him and a woman with true love arrows. Talk about a douche move. Forcing the man to lie to himself and everyone about who he is. And how is that fair to do to the girl? She’s a victim too!”
“The IDAC does not consider a gaydar to be a reliable source of information,” he said, completely ignoring the more-than-valid complaint.
Humans were born with a variety of sexualities, but there were only a limited variety of arrows to complement the IDAC’s narrow-minded ideas on sexuality. In a nutshell, there were gay arrows and the naturally more powerful straight arrows. Don’t get me started on the complexities of targeting anybody not gay or straight. I was glad not to be assigned to those fledgling subdivisions of GD because they often had to work with the jerks in SD. However, both primary divisions had arrows for love (red) and lust (purple), each with four different strength ratings—one being the most potent. In other words, the Class 1S love Ethan had been using was the highest strength straight love arrow—aka the most powerful of all arrows.
Hence his being so pissed at me.
“I’m not gonna sit here and argue politics with you. We both know I’m already in trouble for an unauthorized arrow launch. Make that two,” I amended, gesturing to his chest. “Why the fuck do you think I don’t have love arrow privileges anymore? Hell, the sparks our collision set off will raise questions too. I’m already busted. Fine! I’m ready to face whatever comes my way. When I set out to do this, I knew there were risks.”
“Set out to do this?” he repeated, looking utterly appalled. “You mean you have done this before?”
I swallowed, feeling like a child being scolded. “Only on unattached people.”
“I cannot believe you would do that to someone! A person’s decision to come out is deeply personal. You have no right, Lio! None!”
Yeah, but the Fates did, I supposed. Who put those bitches in charge, anyway?
I didn’t know what Ethan’s big fat beef might be—besides the one in his pants—but I had to get my ass out of this sling. “Like I said, I’m already busted. If you think Raymond isn’t gay, let’s just follow them”—I pointed to my unauthorized mark and the guy with him, both of them deliberately brushing hips and shoulders as they walked down the street—“and see what happens. If he changes his mind, I’ll admit the gaydar is inaccurate, I’ll turn myself in for interrupting your mark, and you won’t even get in trouble.”
He glared. “And if your arrow works, I suppose you get to walk?”
“If I’m right, and those two dudes get their freak on, you can do what you want with me.” Too bad that wouldn’t be those full lips around my dick. “But you give me back the gaydar and you don’t tell anyone I have it or that I was here.”
Ethan looked at the device in his hand as if it would explode or jump up and bite his cock off. His expression would’ve been funny if this weren’t so serious. He seemed to be weighing something in his mind, and I felt his anger retracting. Still, an aura of incredible danger and masculinity wafted about him. My heart thumped wildly, both from nerves and the exotic spiciness of his skin. Knowing his ferocious appearance was tempered with an innate goodness made me a little hot.
Okay, a lot hot.
Though it went against every rule I made for myself, I couldn’t stop picturing Ethan naked. Sure, I was as horny as any cupid, but something about this Aztec amplified all of my senses far more than usual—especially the ones below the waist.
“I cannot believe I am saying this,” Ethan said slowly. “But I will give you one chance. One. But if you ruin that man’s life, your ass is mine.”
“Talk dirty to me,” I purred.


He lowered dark brows. “You are not funny.”
“I think I’m a really fun guy. Especially when I’m naked.” I couldn’t help myself and gave him a suggestive wink. “And whoever said a little dick up the ass would ruin a man’s life? Ever try it? The orgasms are un-fucking-believable.”
Ethan curled his lip and growled at me like an angry cat.
“Jeesh, sorry I mentioned it.”
He seized my arm in a viselike grip. “Come.”
If I’d known going with Ethan would turn my world upside down, I would’ve grabbed my gaydar and run, taking my chances with my boss, the IDAC, and even the Fates. Because I wasn’t prepared for what was coming my way.

We were able to ask the author a few questions:

Hi Deanna, welcome to My Fiction Nook. Please tell us something about your character’s friends.

Walter is Lio’s BFF, and he was soooo fun to write! Here is a little tidbit of Lio and Walter together:

Walter threw his arms around me and gave me a big kiss, right on the mouth. His lips were soft and pillowy, not at all like Ethan’s pierced masculine ones. No scratch of stubble either. Cupids had very little body hair and rarely needed to shave. I’d always loved kissing Walter though we’d never been lovers. He was my best friend. Closer than a brother, even.

He meant everything to me.

“Were you hanging around the glory holes again?”

“I can’t stay away! It’s like crack,” he gushed. “LOL, sometimes there’s crack too!”

Lio enjoys pomegranates and wine and beer and ice cream….pretty much anything indulgent!

What activity does your character absolutely hate?

He hates doing his job for the Inner-Dimensional Association of Cupids, AKA giving humans love. Here’s what Lio has to say about it:

“There’s no such thing as true love.”

He looked like I’d just slapped him. “How can you say that? You’re a cupid.”

“C’mon, we both know this is all a bunch of bullshit.”

Ethan straightened his shoulders. “I believe in love.”

“Well, good luck with that. Do you know how many times I’ve shot someone with a true love arrow and then society, some trickster or another god, or the person’s own selfishness ruins it? Every day people turn their backs on love. Ever pay attention to what happens after you shoot someone? The lies they tell each other once our magic wears off? The secrets they keep from the people they supposedly love? The way they hurt each other?”

“Just because people abuse the love we give them does not make it any less real, Lio. You must see that.”

“Gimme a break.” I crossed my arms and scoffed. After the stories I’d heard about his past love life, I was a little surprised he would still be drinking the Kool-Aid the IDAC served.

What other author’s book do you think your character would be good in?

Well, Kayla Jameth is my critique partner and she writes some serious Spartan era romance (A Spartan Love and A Tested Love) and occasionally Apollo makes an appearance. I would love to watch Ethan and his brother Quetzalcoatl throwing back shots with the other god. LOL

What’s your favorite decade and why?

This one! I love life and while I write about the past, I try not to live there ☺

Deanna Wadsworth might be a bestselling erotica author, but she leads a pretty vanilla life in Ohio with her wonderful husband and a couple adorable cocker spaniels. She has been spinning tales and penning stories since childhood, and her first erotic novella was published in 2010. She has served multiple board positions at her local RWA chapter and with Rainbow Romance Writers of America. When she isn’t writing books or brainstorming with friends, you can find her making people gorgeous in a beauty salon. She loves music and dancing, and can often be seen hanging out on the sandbar in the muddy Maumee River or chilling with her hubby and a cocktail in their basement bar. In between all that fun, Deanna cherishes the quiet times when she can let her wildly active imagination have the full run of her mind. Her fascination with people and the interworkings of their relationships have always inspired her to write romance with spice and love without boundaries.