Sports Of The Seasons #1


Hello! This is Leigh Carman, author of Match Point, a M/M, enemies to lovers sports romance by Dreamspinner Press. Thanks to My Fiction Nook for having me here today. I also write under the name Heather C Leigh, mostly M/F, but also a M/M book as part of a series that was a Rainbow Award Finalist last year. I love the Red Sox and chocolate (but not white chocolate, everyone knows it’s not real chocolate and doesn’t count)

Today, I wanted to chat briefly about characters, male characters to be specific, and how writing gay romance is way different from writing heterosexual romance. Many authors have tried, and failed, to write in this complicated genre. Their number one mistake is to treat one character as the “man” and the other as the “woman”, writing a heterosexual romance, simply substituting gender of one, and slapping the M/M label on it. No, no, no. Genders are not “substitutable” and readers in this genre in particular, are sharp, and take no bullshit. No way would you guys let that kind of thing slide without calling the author out.

This, of course, does not mean that some gay couples don’t have traditional male/female roles in their relationship. It also doesn’t mean some heterosexual couples have instances of the female taking on the “male” role and the man taking on the “female” role. Me? I hate roles. Despise them, in fact. My characters are who they are. Big and buff or small and slender, they are individuals who think for themselves, make their own decisions, and have personalities to match. (Doesn’t it sound odd that someone I create has his own thoughts and brain?) Yet it’s true. The character leads and I follow.

Now, I’m not some crazy method actor type author, pretending to be the character as I write. It’s more akin to asking myself, “What would Dex do here?” or “How would Finn react to someone saying such-and-such to his face?” The biggest mistake an author can make is to assume one person in a couple must be XYZ and the other must be ABC. Human beings are complex individuals. Sometimes their choices make sense, sometimes you sit and scratch your head, staring at your e-reader while screaming, “What in holy hell is so-and-so thinking?” But isn’t that what makes the journey fun? Predictable fictional characters are as boring as predictable real life people.

I’m going out on a limb and generalizing here, but as with everything in life, there are exceptions to every rule. Men are less likely to sit and ponder a situation over and over and over six ways to Sunday. Men are creatures of action—whether it’s to fight, face something head on, flee the scene, or attempt to fix whatever is broken. They don’t huddle with their friends and pick apart their love life while sipping cosmos like an episode of Sex in the City. They do or they don’t do. They don’t discuss.

In Match Point, Dex is the runner. He runs from a lot—his past, his present, his future… Finn. Influenced by a lifetime of hiding in the shadows, Dex is dreadfully incompetent at pulling up his big boy britches and facing his issues head on. He hides behind a sunny smile and a string of useless, female arm candy.

Finn is a man of action. One who has been stifled into being a man of inaction after being reluctantly stuffed in the closet. The result is a bitchy, petulant, grouchy asshole, who holds everything true to himself deep inside and viciously lashes out at anyone and everyone as a result.

Both men present a façade at first, each slowly drawn into being his true self over time and a hell of a lot of fantastic conflict.

I hope you enjoy Match Point. Dex and Finn are near and dear to me, and if I’m lucky, you’ll love them too. Here’s an excerpt from Match Point.

Thanks for having me! 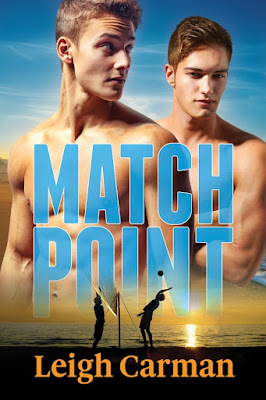 One is a rude jerk. The other, the life of the party.

It was hate at first sight.

Pro beach volleyball players Finn Callahan and Dexter Savage have been rivals since college. While Finn always comes out on top on the court, Dexter’s carefree and fun-loving personality earns him scores of adoring men and women. And as much as Finn fights to deny it, there’s another reason for the tension he feels when Dex is around. Hate wasn’t the only thing he felt when he first laid eyes on his opponent.

When they’re forced to team up, the two men must bury their differences—on and off the court—if either of them is going to succeed professionally.

“Get it. Get it. Hurry, hurry!”
I scramble for the ball while Coach yells out encouragements—or possibly reprimands. I can never be sure which. Either way I’m on top of my game today. I hustle to the net, get under the ball, and bump it with my wrists, arcing it high for Dex.
Dex waits for it to come down and lifts it using his fingertips. As the ball goes in the air, I take a running jump, curve my body so it doesn’t touch any part of the net, and smack the ball over our opponent’s head. It hits the sand.
“Yes,” Dex shouts and holds up a hand for me to high-five. Grinning, I reach out and slap my hand into his. Dex holds on to it for a brief moment. The contact is quick—less than a second—but the heat that sears through my palm leaves a lasting impression. It’s time to switch sides and it’s my turn to serve. Dex puts his hands behind his back and gives me the signal to hit it left with no spin. I toss the ball up and hit it over the net.
Beautiful. Our opponent drops to his knees and makes the save, but he can’t get to his position quickly enough to reach the ball his partner perfectly sets for him. Dex cheers and pumps his fist in the air. I grin at his enthusiasm. Watching Dexter Savage have the time of his life is mesmerizing. It infuses me with an energy I’ve never felt before. I no longer see Dex as just another charming guy. He has me spellbound and hanging on his every word.
“Nice whiff, dickhead,” I call out when he misses a dig and comes up with a mouthful of sand.
I can’t have him thinking I like him or something.
Dex laughs and spits out the sand. “Shut up, Callahan.”
By the end of the day, we should be exhausted, but we’re riding high on winning the New Orleans Open, and on the thirty-minute ride back to the hotel on the river, we both get our second wind. Dex is literally bouncing around. He’s so full of energy, he’s making me dizzy.
“Come on, Finn. Let’s go out to celebrate. This is New Orleans, The Big Easy. There’s sin on every corner and a ton of awesome clubs here.”
I roll my eyes. “I doubt your idea of an awesome club is the same as mine, Savage.”
“What?” Dex squints at me. Then his eyes widen almost comically. “Oooooohhh. You don’t think I can handle a gay club?” A slow, snarky grin spreads across his handsome face, and my breath hitches.
Hello dimple.
I shake off my dirty thoughts to get back to the subject at hand. “No. I don’t. God. I can’t even think about you going into a gay club without laughing.”
Or getting hard and groaning.
“Hmph.” Dex levels his intense hazel eyes at me and quirks one eyebrow in challenge.
“No, Dex.”
“Yes, Finn,” he sings gleefully.
“No way.”
Dex chuckles and nods his head. “Oh yes. Pull out your sparkly top, baby, because we’re hitting the gay clubs tonight.”
“Fuck you, Savage. I don’t own a sparkly top.”
“Rainbow?”


“No.”
Dex gives me a disgusted look. “What kind of gay man are you?”
“Not a very good one, I guess.”
One who crushes on his straight teammate, that’s what kind of gay man I am. A stupid one.
After five minutes of back and forth, I finally get Dex to let go of the idea of cruising gay clubs tonight, but only on the promise that I’ll take him to one when we get back to LA. I’m hoping he’ll forget by then, because seeing his gorgeous ass shaking on a dance floor while hot, sweaty guys grind on him? I’d implode before the night was over.
We change and grab a cab, and Dex directs the driver to head toward Bourbon Street. “Really, Dex? Bourbon Street? Can’t we go somewhere a little less—”
“Less fun? No, Callahan, we can’t. You’re having fun if it kills me. Tonight I’m officially removing the stick from your ass….” Dex twists his head and shoots me a scorching look that has my dick throbbing painfully in my shorts. “Even if I have to pin you down to yank it out.”
Holy fuck.
I swallow, and my mouth suddenly disconnects from my brain as every drop of blood in my body turns to lava and collects in my groin.
“Whatever, Savage,” I mumble, turn to the window, and shift my hips so Dex can’t see my now fully hard cock.
Dex laughs and shoves my shoulder. Does he not know what he’s doing to me? I sneak a glance at my teammate. He’s looking out his own window, eyes glittering, smile as wide as a kid on Christmas morning.
No. He has no clue. He’s truly excited to go out and have fun. In fact he’s practically bursting out of his skin, he’s so wound up. But then, Dexter Savage always was the life of the party. He’s comfortable in his own skin. It’s what makes him so attractive. Well, besides the tousled, just out of bed hair, the perfectly straight nose and full mouth, and the body to die for. But his outgoing personality was what had me crushing on him in college—and the reason I hated his guts. I watched him every day at practice as he charmed everyone around us, and knew he would never be available to me.
“Here it is.” Dex throws some money at the cab driver and leaps out of the car. I take a look at my surroundings and thump my head on the glass. We’re on a street thick with pedestrians clutching hurricane glasses and sipping through long straws as they mingle in the crowd. Neon signs line the business fronts on both sides of the cab, each promising a different kind of debauchery inside.
Dex leans down and sticks his head in the backseat. “What are you waiting for, Callahan? Let’s get this party started.”
Ugh. Tonight is going to be pure torture. 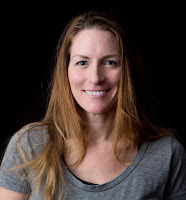 Leigh Carman is the pen name for the M/M romances written by bestselling Contemporary romance writer, Heather C. Leigh. She lives outside Atlanta with her husband, 2 kids, and French bulldog. She is leaving explicit directions in her will for her friends to discreetly scatter her ashes around Fenway Park. Then they are to sit back, watch a game with a beer and a Fenway frank and have a wicked good time.

You can find out the author more on her website.