Blogtour: Endings And Beginnings by KC Wells and Parker Williams

Please say hello to K.C. Wells and Parker Williams as they present 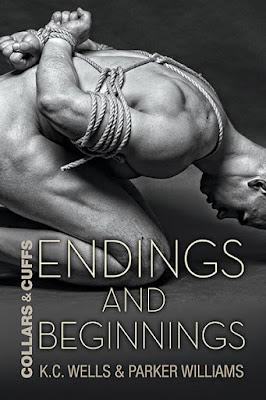 In all his relationships, Darren Fielding never found the level of intimacy he witnessed between Thomas Williams and his sub, Peter, the day of Peter’s “rebirth.” Not only that, he never realized such intimacy was possible. For two years, Thomas’s business card has been burning a hole in his wallet. When Darren’s lover moves on, maybe it’s finally time to see where that card takes him.

Collars & Cuffs’s new barman, JJ Taylor, is really conflicted right now. He went to the club with a very specific purpose, already convinced of what he’d find there. Except it’s not what he expected at all. He certainly didn’t anticipate finding himself drawn to the new wannabe Dom. Nor could he have guessed the direction that attraction would lead him.

Alex laughed and came out of the kitchen to greet his husband. “We’ve talked about this, right? You do not walk into this apartment and talk to me like I’m the little wife.”

Leo kissed him soundly on the cheek. “Aw, but you’d look great in an apron, holding a glass of beer out for your weary, hard-working hubby.” He smirked. “And besides, no one in their right mind would call you little.”

Alex quirked his eyebrows. “One, you don’t drink beer, which is why there’s a glass of chilled chardonnay on the living room table, waiting for you. Two, excuse me—weary? Hard-working? You’ve been standing around in leather chaps and a harness, watching while guys do all manner of things to each other, which probably included a lot of fucking, because, hey, it’s Saturday night, right?”

Leo sighed happily. “What can I say? I love my job.”

We snagged an interview with the authors!!

Parker: For me it’s Someone to Keep Me. It was the book that brought KC and me together as a writing team. The why is a little more intricate than that, though. I loved Ben and Scott. I knew that they had issues, and was totally aware that they wouldn’t be solved by the end of the book, but that’s the great thing about this series: People grow and change. I think by the end of the series, Ben has made huge leaps in his Dom-ness, and I feel that Scott is more settled in his role, even if he’s still a bit of a brat.

KC: I still love An Unlocked Heart. Yes, there are things I’d change about it, but I loved bringing Alex and Leo together.


Parker: Ben and Scott top my list, because they weren’t perfect. They both made mistakes and did some really stupid things. Some people pointed out that they didn’t care for Ben because he was a crappy Dom. Well, guess what? He was. But he learned, adapted, and grew into the man Scott wants to be with forever.


Parker: I don’t have any least favorite characters. Each of them is unique and shines in their story, but for a lot of them, they come in to help on other stories, too. KC started building more than a club, she built a family that I was more than happy to be part of.


Parker: Dorian made me cry. It’s the first glimpse of KC’s true evil genius, even though she denies it.

KC: I spoke with a friend who said how the clubs in Berlin were more hardcore. He told me what his experiences had been. Then I looked at pictures of the club. The not so nice part was researching the branding…


Parker: The best part of collaborating for me is bouncing ideas around, seeing what we can do to make these characters as real as flesh and blood. We want to write a story that will bring emotions out in people.

As for the time difference….ugh. I usually end up waking around 2 am to talk to Ms. Perky Pants who has had her (as Scott calls it) pure evil (coffee).

Keep me in line? Uh…excuse me? How does she keep ME in line? You all think she’s got this laser focus, and needs to crack the whip (giggle) to keep me moving, but the truth of the matter is, KC is…is….put down the whip, KC.

Sorry, I can’t say. She’s got that look in her eye.


Parker: We do! We’re going to be working on a new series called ‘Secrets’ that we hope to submit the first book by the end of the year to Dreamspinner Press. I’d love to tell you about it, but it’s a Secret. ☺


Parker: Some bits of the characters are based on real people. (You’re welcome to try and guess who is based on me!)

KC: I had the idea for the Collars & Cuffs family after reading the Deviations series by Chris Owen and Jodi Payne.


Thank you!!! Readers, please tell us your favorite book from the series in the comments!

Good day! We are the voices that live inside Will’s head. The ones who whisper to him constantly, beckoning him to speak of our adventures, to tell of our love, and perhaps, if we’re in a mood, kill a person or two.

We guide his hand as he tells our tales where love is the most powerful force, but must be worked for, molded, and finally, embraced. There can be no shortcuts or substitutions on the path to a happily ever after.

We hope you will join with us as Will fulfills his obligation to ensure our stories are told and, we hope, enjoyed.