Blogtour: Dinner For One by Meg Harding

Thanks for having me today, Sandra! Dinner for One is the first in a four part novel series centered around the Carlisle family. The series follows four brothers as they find their significant others. This first novel is about James and Bastien, a food critic and a French chef. James makes a mistake, and he knows he needs to fix it, but he gets trapped in the well is this the right time to say I messed it up thinking. This mistake leads to one of my favorite things I’ve ever written, a special kind of I’m sorry.

James’s siblings play a big part in this book, introducing the reader to the family they’ll get to know well as the series continues. French food also plays a big part, and James makes an effort to get through to Bastien by cooking for him. The exclusive excerpt below includes a glimpse at James’s relationship with his older brother Laurence and a peak at him making the French potato dish Aligot. In case you’d like to make this meal yourself, here’s a Youtube tutorial showing how. 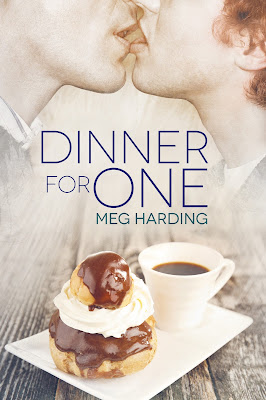 Bastien isn’t used to bad reviews. His French restaurant is the toast of the town, and when a well-known critic insults it, he’s left off-kilter. Luckily for him he’s found a distraction. He’s just met an attractive writer at his niece’s school bake sale. He’s into food, into Bastien and the touch of kink they share, and there’s a chemistry between them that might make the perfect recipe.

James isn’t expecting to meet a good-looking French chef at a bake sale, but he’s not going to let the chance slide. It comes as a surprise when the chef turns out to be the owner of a place he knows—and has reviewed—and it puts James in a sticky situation. So he might have to omit some pertinent information to make it work… at least for now.


He sighs. “I’m making Aligot for Bastien today. It’s basically fancy mashed potatoes, and I don’t have the cheese the recipe calls for. Or truffle oil.”
“Ah.” His fingers beat a quick rhythm on the steering wheel as they slow to a stop at the light. “Need any help with that?” He clears his throat. “Making it. Not buying the stuff.”
“Sure,” says James, gaze still on his phone. He doesn’t need any help, but he knows his brother and he knows what this is: them both saying “Hey, we fucked up. Let’s forget it.” They’ve never been good at the whole saying sorry thing.
Shopping and the drive back is way more them. They bicker over if one cheese might be better than the cheeses in the recipe, and then they fight over the radio in the van. When Laurence turns the station to a country one, (and he doesn’t even like country, so James knows he’s doing it just to be an ass), James flicks his ear.
“Ow,” whines Laurence. “What’s that for?”

James rolls his eyes and changes the station to a mainstream one.
Laurence switches tactics. “What does it mean that he can’t feel his face?” asks Laurence. “That doesn’t make any sense.”
Getting out of the van is nothing but a relief. James waits till his back is turned to let a small smile stretch his lips. He’s not sure how it works, maybe it’s a weird sibling thing, but despite wanting to maim Laurence, he’s relieved to have him there.
And cooking with him is fun. It’s something he hasn’t done in ages, and everything takes twice as long with a twice as big mess, but it’s nice in a comforting-routine kind of way. They mash the potatoes themselves, letting them get tender while they soak in a saucepan and then trying to reduce them to mush. Even soft it’s an arm workout. Bits of successfully mashed potato end up getting flicked as they engage in a mini-food fight, arguing over who’s doing a better job.
The remaining steps are all simple, and the Aligot is by far the easiest thing James has made and probably will make for Bastien. He lets the potatoes cook, and when they’re done he mixes in the cheese and adds the truffle oil. The end result is tasty, and he’s made enough that Bastien can have some of this batch and Laurence can take some home as well.
The two of them retreat to the living room, and after a lengthy debate between Iron Man and Captain America, they decide to watch the first Avengers film. “Because it has both of them in it,” says Laurence. “Look at us compromising.”
He throws a pillow at his head. “You’re such a dork. Mom’s not here.”
“She could be. I can call her.”
He groans. “No. I’m not ready to deal with her yet.” He needs someone else to fuck up before he can see her in person. That way she’ll be distracted. What? He doesn’t handle her disappointment well.

Meg Harding is a graduate of UCF and Anglia Ruskin University. For as long as she can remember, writing has always been her passion, but she had an inability to ever actually finish anything. She’s immensely happy that her inability has fled and looks forward to where her mind will take her next. She’s a sucker for happy endings, the beach, and superheroes. In her dream life she owns a wildlife conservation and is surrounded by puppies. She’s a film buff, voracious reader, and a massive geek.