Hi all!  I’m Charlie David and I’m happy to stop by here at MyFictionNook.  It’s been such an exciting Spring for me as I’ve had my books published by Dreamspinner Press – first Mulligans, Shadowlands and now Boy Midflight.

Boy Midflight is largely constructed from my teenage journals.  The inherent nerves, fragility, and occasional brazenness embodied in the main character of Ashley are all aspects of me as a teenager.  This is a coming out story set in the 1990s and it’s fun to reflect on what has stayed timeless in the teenage experience and how other things have progressed at lightning speed.  The biggest change of course is technology and how it’s affected so many parts of our lives – for better of worse.

In the 90’s as a kid who felt different it was a monumental challenge to find a community to gel with.  Internet chat rooms existed of course but geo-location based apps did not. This meant that even if you were lucky enough to forge a connection in an AOL or Yahoo chat room – it was more likely than not that your cyber person of interest was geographically far from you.  As a teenager even if they were in the same state – it may as well have been on Mars.

Due to this isolation, sexual experiences and loss of queer virginity did not generally happen in hyper-speed as they do with many young people today.  Reflecting on how I met my first boyfriends in the 90’s and the path of how our relationships blossomed in a more organic and in some ways traditional way left me feeling nostalgic.  Meeting guys who liked to kiss guys was certainly not as easy as it is today but somewhere in that greater challenge lived a little magic.

If you enjoy a main character who is quirky, ambitious and in love with falling in love – then Boy Midflight might just put a smile on your face. 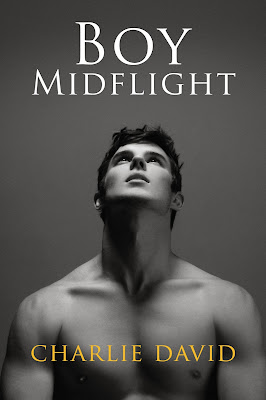 At eighteen, Ashley seems to have everything: looks, talent, and even a girlfriend. What more could a young man want? Yet something is missing, and he has to come to terms with his sexuality and the possible implications for his career in the public eye. He begins dating Chris but isn’t sure he’s head over heels in love. It’s not the knight-in-shining-armor feeling he always imagined.

When Ashley is offered a big modeling job, he leaves his university in small-town Canada for a very different life in sunny Los Angeles, California. There he meets a slightly older man who makes him feel like he’s in a storybook romance. But is Ashley ready for real love, or is it just infatuation? The world is spread out before him, at once limitless and daunting, full of endless possibilities one moment and opportunities cut short the next.

Ashley floats between certainty and confusion as he tries to unravel new feelings, deal with past pain, and decide what he wants from life—and who he wants beside him during the journey.

My vocal coach and mentor, Millie, asked… no, she told me to journal. She said it will help free up my stream of consciousness, whatever that means. Millie, ever wise and wonderful, suggested I write in the mornings to clear all the garbage out of my head so I can go on with the day free and clear of junk. I told her that was stupid. Why would I want to record junk? Regardless, here I am with my pen and paper at 6 a.m. writing….

March 17th
Peanut. Parsnip. Peppermint Patty. Pony. My Little Pony. This is dumb. Am I really just supposed to write whatever words come into my messed up little head? Duck. Buck. Fuck. Truck. This sucks. How will this free my “stream of consciousness?” Need coffee… morning wood. Chris…. Chris…. All I can say is wow! Chris and I at this point seem like a sure thing… to some degree. That is both scary and very, very exciting. I can’t wait to call him. I can’t wait to hold his hand, and for that moment when we unite our lips. To feel his tongue inside my mouth and to place mine in his will be ecstasy. Feeling his body pressed close to mine and to have our arms wrapped around each other.
I just want to stare into his big blue eyes and stroke his hair and lips all day. He’s going to break up with Jeremy, to be with me! Oh no, I’m that guy. Maybe I don’t need a boyfriend (or to steal someone else’s). Maybe I just want a guy friend. I need that, a guy friend to go out with, talk and joke with. I have a multitude of girlfriends here but I need the balance of male companionship. I want a guy to play football with. I want a guy to talk with, to share my dreams with. Sometimes I get so lonely. I just want someone to touch me, to give me a hug. Dad never hugged me. Oh shit, is that what this is about? I am so fuckin’ confused. No. This isn’t about Dad. This is about sex. No, it’s about love. It’s about not going to bed every night hugging my pillow, just wishing I had someone to be holding onto.
Oh God, I sound so pathetic!

What do You think of all this? A Catholic boy living in venial sin. How pathetically predictable. Screw it. I can’t do it anymore, God. I can’t pretend that I’m like all the rest of the sheep in the flock. I’m not. And by the way, I don’t even know what You are. And I don’t know that I should call you God because I think you’re something different than what I was taught you are. Universal Life-force Energy is too wordy. I’ll call you Antonio. Which is actually fitting since I can’t help saying, “Oh my God” every time I see Antonio Sabato Junior.

I put down the pen. Okay then, that was a rapid marathon through a little swamp of confusion, wasn’t it? Maybe Millie is right. Maybe there’s more going on in my head than I realize.

Charlie has been a host for E! Television, NBC, OutTV, LOGO, here! TV, Pink TV, EGO, Fine Living, and Slice Networks on such shows as FYE!, SpyTV, Crash Test Mommy and his travel series Bump which shot over 100 episodes around the world and garnered a Hugo Television award. He has appeared as musical guest on VH1, BBC, CBS’s The Early Show, and dozens of radio shows.

In 2005 Out Magazine recognized Charlie in the ‘Out 100’ at their gala in New York. In 2007 the Philadelphia Film Society awarded Charlie with their Rising Star Award. In 2008 the Festival del Sol in Gran Canaria awarded their Best Male Actor Award to Charlie and the male cast of A Four Letter Word. Formerly in a rock band… okay, actually it was a boy band, Charlie opened for Destiny’s Child, Pink, Snoop Dogg, Rick Springfield and Black Eyed Peas.

He is a graduate of the Canadian College of Performing Arts and his current passions include travel, encounters with wildlife, SCUBA diving, mosaic tiling and podcasts. He resides in Toronto and Montréal, Canada when he’s not living out of a suitcase.

You can explore Charlie’s films and TV shows on his website or become a part of his social media network by visiting: