Blogtour: Ace In The Hole by Ava Drake

Ace In The Hole 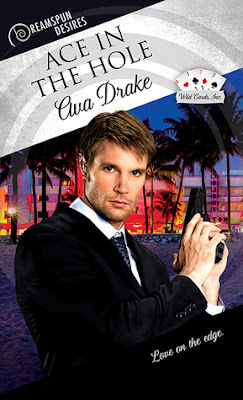 Christian Chatsworth-Brandeis has a problem. A huge one. The US senator he works for has run away with his latest mistress on the eve of a make-or-break fund-raising event, and it’s up to him to cover his boss’s irresponsible tracks.

Stone Jackson, the senator’s new bodyguard, looks enough like the senator that, with some extensive grooming, he might pass for Senator Lacey. Christian and Stone hatch a plan to fool everyone by substituting Stone for the senator, but Miami madness and the incendiary heat between them are throwing obstacles in their way. It’s a race to find the senator and pull off the con of the century before the attraction between them spins completely out of control.

Happy 240th anniversary of the day when a bunch of radical upstarts said F-off to a hidebound political elite, who could not conceive of a world where individual freedoms took precedence over their own prejudices and preconceptions!

Or perhaps I should say, Happy 240th Anniversary of the First Brexit! (And chillax Britain. The First Brexit worked out pretty good for America. You’ll be okay.) Or, shall I just say, happy Beer Drinking, Fireworks, Go ‘Murrica Day?

One of the most precious freedoms the 4th of July commemorates is our priceless freedom of speech. Personally, I think there’s a darned good reason it was given a place of honor as the First Amendment to the Constitution. I’m especially grateful that I have the freedom to write whatever I want and you have the freedom to read whatever you want.

You and I can both indulge in stories where two awesome people not so unlike you and me can meet, fall in love, overcome all obstacles in their path, and find their own personal happy-ever-after. And maybe, if we all raise our voices to promote the crazy idea that dreams can come true, then happy-ever-afters will one day be available to everyone in this big, messy, cussedly independent country of ours.

Wouldn’t that be lovely? In the mean time, we have books to fire our imaginations, show us what’s possible, and dare us to dream bigger than life.

Speaking of bigger than life, when sexy Stone Jackson and delicious Christian Chatsworth-Brandeis burst into my life, they gave me no choice but to concoct a juicy, steamy, over-the-top story for the two of them. And then, not being the meek, obedient types, they took over mid-story and threw a few totally unexpected turns and twists at me. But I confess, I do SO love a bad boy or two.

I confess, my purpose in telling Stone and Christian’s stories was not to write the great American gothic novel. I just wanted to create a fun, fast, sexy read where two cool dudes get a shot at happily ever after if they can just pull off your garden variety impersonation of your average national political figure…oh, and not die in the process. Easy peasy, right?

Please take a moment today to appreciate the freedoms we have, and the freedoms we all should have. And when that moment has passed, may I recommend a nice, cold umbrella drink and a copy of Ace in the Hole—and enjoy some fireworks between the covers (of the book you naughty person, you)!

New York Times and USA Today bestselling author, Ava Drake, grew up in the heart of the rural Midwest, but beat a hasty retreat to the big city and bright lights as fast as humanly possible. Armed with a pilot’s license, fluency in several languages, and a large dose of daring, she took off to travel the world.

She flew everything from single-seat private airplanes to supersonic jets and the western world’s largest airplane, the mighty C-5 Galaxy. In her adventures, she visited forty-two countries on five continents, was detained by the KGB and East German secret police, got shot at, flew in the first Gulf War, met her dashingly handsome husband, and amassed a lifetime’s worth of war stories. Along the way, she engaged in a little light espionage and met more than her share of dark, dangerous, and good-looking men.

Travel weary at last, she came home and settled down to the business of writing stories of romance and adventure, which may or may not be autobiographical. Winner of a Golden Heart and Holt Medallion for Romantic Suspense, Ava is a five-time finalist and two-time winner of the prestigious RITA Award for Romance Fiction. She’s also a two-time winner of RT Book Review’s Best Harlequin Romantic Suspense Novel of the Year, and is a Romantic Times Lifetime Career Achievement nominee.