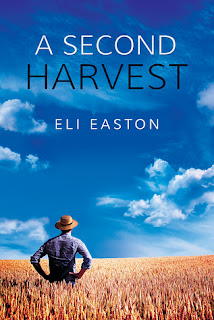 
David Fisher has lived by the rules all his life. Born to a Mennonite family, he obeyed his father and took over the family farm, married, and had two children. Now with both his kids in college and his wife deceased, he runs his farm alone and without joy, counting off the days of a life half-lived.

Christie Landon, graphic designer, Manhattanite, and fierce gay party boy, needs a change. Now thirty, he figures it’s time to grow up and think about his future. When his best friend overdoses, Christie resolves to take a break from the city. He heads to a small house in Lancaster County, Pennsylvania, to rest, recoup, and reflect.

But life in the country is boring despite glimpses of the hunky silver fox next door. When Christie’s creativity latches on to cooking, he decides to approach his widower neighbor with a plan to share meals and grocery expenses. David agrees, and soon the odd couple finds they really enjoy spending time together.

Christie challenges the boundaries of David’s closed world and brings out feelings he buried long ago. If he can break free of the past, he might find a second chance at happiness.

Your life shouldn't end at 40, especially when it hasn't even began.

David has always lived for others: his strict father, his late wife, his two children, his farm, his community, his church. But he's never lived for himself.

A near recluse, David finds little joy in his never-ending farm work. He names his cows, even though he knows he shouldn't. He eats frozen dinners. He reads his collection of National Geographic magazines. And he fends off the advances of a widow who believes it's god's will that they be married.

Nothing much happens in Lancaster County, Pennsylvania.

Until Christie moves in next door. Eleven years David's junior, Christie is a reformed party boy, a designer who doesn't do anything halfway. Christie inherits a house in Mennonite country from his aunt and when he finds her Bon Appétit collection, he fills his time cooking delicious food.

Christie is drawn to the shy farmer who refuses to look him in the eye and offers to cook for him. David's never traveled, but Christie's elaborate meals take him to Morocco, India, even Bora Bora.

Christie and David bond over food, bales of hay, and running. They have snowmobile adventures, and Christie witnesses the birth of a calf. David cherishes Christie's smile and the zest Christie has for life.

He is aware of Christie like he's never been aware of anyone, but David has always hidden his secrets in a box, shut up so tightly no one will ever find them.


This is a story of David's sexual discovery as much as it is a story of two men falling in love. Christie is done with clubs and hook-ups; he wants one man: a bearded silver fox with muscles sculpted by hard work.

There are two steamy scenes in this book, and they are beautiful and quite hot. Did I want more? Well, of course, especially considering Christie is David's first everything. I can only imagine the exploration that took place off-page.

This book is not angst-free, but I appreciate that a story dealing heavily with religion was written without piles of guilt and shame.

David struggles with his faith and conservative church that brands homosexuality a sin. His grown son, studying to become a minister, doesn't approve of his father's "friendship" with Christie, and David has to choose between the static, dreary existence he's always known and the love he's found with Christie.

While the epilogue presents a lovely HEA for these men, the final chapter ends abruptly. I actually wondered if my ARC was missing a chapter before the epilogue. Considering the traumatic incident at the end, the story doesn't do enough to show David and Christie overcoming obstacles and building a new life together.

That is the only reason I'm not giving this one 5 stars. A Second Harvest gets so many things right; it's tender, romantic, and well-paced. I adored both MCs and can't wait to see where Ms. Easton goes with this series.

All good books have one thing in common – they are truer than if they had really happened.