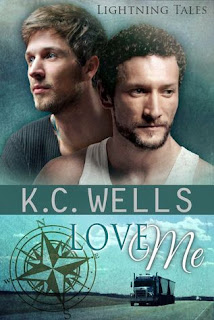 
Trent Sutton doesn’t do monogamy. He spends his days on the road in his truck, and his nights hooking up with anyone who catches his eye. Casual sex, no strings – Trent likes his life just the way it is. He sees what his friend Connor has, but he’s just not interested. Until he meets Aaron, who gets under his skin, into his head, and finally to the spot no one has reached in a long time – Trent’s heart.

Aaron Calder doesn’t do casual. After a few health scares and a couple of traumatic relationships, he’s decided that love – and sex – are not for him. He concentrates on his charity fundraising and ignores the offers that come his way. Until he meets Trent, a man whose dictionary does not contain the word "monogamous." He shuts down Trent’s advances and tries to keep away from Costello’s, the gay bar where they first met.

Except Trent is proving hard to resist.

Love Me is the fourth book in the Lighting Tales series but can be read as a standalone.

Ric and Connor, the MCs from book 2, make an appearance, but they are not integral to the story, which focuses on Trent, a truck driver and unrepentant manwhore, and Aaron, who hasn't been with a man for a decade.

Both men have baggage. Trent has had his heart broken and has sworn off romance. When a hook-up calls him on his shit, Trent gets angry, but the words stay with him. Soon after, he hits on a gorgeous man at his regular watering hole and gets shot down. Whoa. No one rejects Trent. No one.

Aaron is alternately fascinated by and terrified of the sexy man who tried to pick him up. Aaron hasn't stepped foot in a gay bar in ten years, and the last thing he wants is a hook-up.

Aaron recently lost a lot of weight and doesn't think anyone could want him. He's dealt with hurts in the past that have left him anxious and withdrawn. With the help of a therapist, he's dealing with his issues and is brave enough to talk to Trent the next time he sees him.


Aaron and Trent begin a quiet friendship. For the first time, Trent doesn't push a man for sex. This is very much a slow burn story, which is very appropriate for these MCs.

I really loved the tenderness of the sexy times and the way the men come together to help Trent's 18-year-old nephew, whose father and grandfather (Trent's dad) want to send to a gay conversion camp.

The book deals with current political issues, including the propagation of homophobia by religious zealots and the shooting in Orlando. I was not entirely comfortable with the latter, because that hurt is so recent and raw.

The story also begins with an on-page sex scene between Trent and another man. You all know how I feel about that. I'm not saying it's not real; I just don't want to see it.

This is an enjoyable read that tackles some serious topics, which fortunately never overshadow the romance. The HEA is sweet and believable, just the way I like it.

I can't wait for the next book in the series, which I hope will be about Kaden the bartender, who's all kinds of awesome.