ARC Review: A Frost of Cares by Amy Rae Durreson 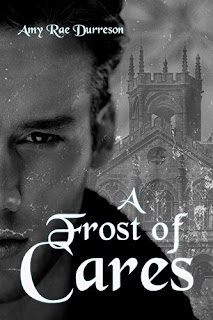 
Military historian Luke Alcott leaps at the chance to live in the seventeenth-century country mansion of Eelmoor Hall, home of the Royal Military School of Medicine, after being offered a job cataloging the school’s archives. Luke believes he chose the perfect place to start a new life and put his broken past behind him. But soon after settling into the old house, he hears strange noises—like footsteps—and he begins to suffer from terrible nightmares.

The only person Luke can turn to for help is the taciturn caretaker, Jay, a veteran of the Afghanistan war who carries an old battle wound. Together they try to understand Eelmoor Hall’s history and decipher what could be causing the haunting. As the weather grows colder and snow dusts the countryside, a child goes missing. Luke needs to deal with his own demons and learn to trust in love again if he hopes to face down the angry spirit and find the missing girl.

Luke doesn’t believe in ghosts. But when one lonely Christmas he finally accepts that his boyfriend Danny is never coming home, he leaves London for Eelmoor Hall where he meets the Mistletoe Bride, a girl who hid so well, no one ever found her.

As Luke tells us, This isn’t a ghost story. This is a love story.

Both men have lost so much: a partner, a limb, their sense of self. Some things we lose forever, and some return to us.

Luke is looking for closure so he can stop waiting for Danny, who was gone long before he left Luke at a hospital ten years prior and never returned.


We know how this story ends: with a happily ever after.

A Frost of Cares is chilling and provocative—the best kind of gothic mystery, and an even better romance. Brilliantly written, sexy, and just a little bit creepy, this book grabbed me and wouldn’t let go.