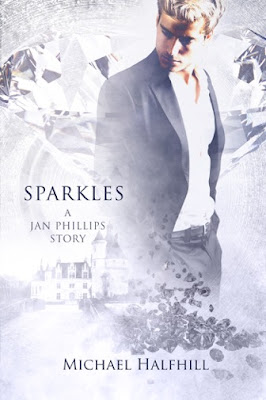 A life cut short; unsolved robberies plaguing Philadelphia’s Jeweler’s Row; a cryptic message scrawled on a paper napkin; a Romanov prince; a young man held captive in Iran; a terrorist cell bent on revenge; and an opera company due to mount a rarely performed production of Handel’s Alexander’s Feast. What do these have to do with Jan Phillips?

One plunges Jan into a prolonged sadness. One leads him on a race to prevent a nuclear disaster. One offers Jan the promise of renewed love. One leads him to reluctantly wield his power as a Mundus master. One is bent on shattering thousands of lives beyond repair, while one unknowingly holds the key to the mystery that has baffled Philadelphia’s finest. Follow Jan as he untangles this Gordian knot that will alter his life in a way he never thought possible.


Getting to Know You

Jan snuggled against Stephen’s chest. The fire had died to a few cinders, and the room had become chilly. The snow had stopped. The wind that had wiped the windowpanes clean had died away. Bright stars burned holes through the black, predawn sky. The new lovers, occupied as they were in pleasuring one another, hadn’t noticed the fire, or the snow, or the sky.
“Jan? Are you awake?”
Jan smiled. “I’m awake. I don’t want to fall asleep.” Jan scooted up and kissed Stephen softly. “I’m afraid if I do, I’ll find that all this will have been a dream.”
“It is real, isn’t? I mean we are…?”
“Yep. We’re what ever we want to be.”
“Jan, you can tell me to mind my own business if you want… I mean, you know about my background, but I don’t know much about yours, except of course that you’re a lawyer, and a…”
Jan stirred. Old feelings, some hurtful, some beautiful, welled up in his heart. He shifted so he could look Stephen in the eye. “I’ll give you the basics. Then we can fill in the details as we go along, okay?”
“I’m all ears.”
Jan thought a while, then he began, “I was raised in a rough working-class neighborhood. My father worked in the Philadelphia Naval Yard, painting ships. With three girls and two boys to feed, he barely made enough to cover expenses.  I was just twelve when he committed suicide. Suddenly I was the man of the house. Imagine, I wasn’t anywhere near being a man, and there I was, with people telling me I had to take care of my mother. My father’s best friend from school days was a teaching priest at Saint Dominick’s Academy. He took pity on us and managed to get my sisters and me into school there. Then when I was eighteen I met Tim Morris. He held the same office I do now in Mundus. We became lovers. He was a lot older than I was. Then one day one of Tim’s associates, who had met my mother, asked Tim if he could date her. Tim didn’t see a problem. Well, there was a problem. First he didn’t ask how I felt about it, and second, there was a hit out on this man. The hit man was clumsy. He missed his mark, and killed my mother instead. You see what I meant earlier about there being danger?”
Stephen looked serious, but said nothing. Jan continued, “I blamed Tim. Later I met a woman at Saint Joe’s College. I persuaded myself that I loved her, and we got married. Not long after we married, we began arguing…. We fought every day for the next three years. We were divorced. By the time I finally admitted to myself that I’d left Tim to get back at him, it was too late… Tim had died. I inherited his law firm, and the North American Mundus master’s chair.”
Stephen squeezed Jan’s hand. “My god Jan, that’s awful. How did you survive it?”

“Two people got me through it. A few years after I came back to find Tim gone, I met Michael.”
Jan hung his head and shuddered with the memory of Michael’s last word. Nice.
“You okay?” Stephen said.
Jan nodded away his sadness. “Yeah… I’m good…. Really, I am.”
Stephen hugged Jan in closer.
Jan continued,  “Michael and I were together for just over twelve years when a son I didn’t know about suddenly showed up. His name is Colin. Now there’s a story for a rainy night!”
Stephen immediately thought of drug use. “You had problems with him?”
“Oh, you could say that. Just when I thought things might work out between us, he ran away. He ended up in Iceland, of all places.”
“Hey, I’m a Danish prince! Those are my people.”
“Stephen, Iceland’s a republic. You royals never seem to get the message,” Jan mocked.
“Well, don’t tell Aunt Margot. Poor woman still thinks it’s nineteen-forty and she is their queen—So you were telling me about Michael.”
Jan blinked away a telltale tear at the mention of Michael’s name. “Ah yes, Michael. The long and the short of it is, we had just over twelve good years, then he developed an early onset of Alzheimer’s disease. For five years I watched Michael fade before my eyes. Eventually, he couldn’t recognize me…. Stephen, you can’t imagine what that’s like until you go through it yourself. He was still relatively young and there he was playing with dolls like a small child. I couldn’t believe it was happening. Michael died just over a year ago—but I had years to prepare for it. You’d think all that time would have made it easier, but it didn’t.” Jan sucked in a deep breath.
“You love him still. I can hear it in your voice,” Stephen said.
“Guilty… but you don’t have to worry about his ghost coming between us. He became one long before he died, and I’ve had enough specters to last a lifetime.”
“What about your son?
“Colin is married to his high school sweetheart. He lives on a ranch in the middle of nowhere in Montana. He seems happy and that makes me happy for him.” Jan turned wiping an unwanted tear before facing Stephen. “So, as you see, I’m quite alone.”
“How old is he?”
“Oh, let’s see, Colin’s coming up on twenty-five.”
“Twenty-five? Say, how old are you?”
“Let’s just say I’m over forty. You can count the candles on my birthday cake, if you really want to know. Oh, and spare me the ‘you don’t look your age’ line. I know that already.”
Stephen sat up and stared out the window at the lightening sky. “Wow, I never thought I’d be in bed with a much older man—and by the way, Jan, you’re not alone… I’m here.”
Jan laughed. “Older man? Come here and I’ll show you what an old man can do.”