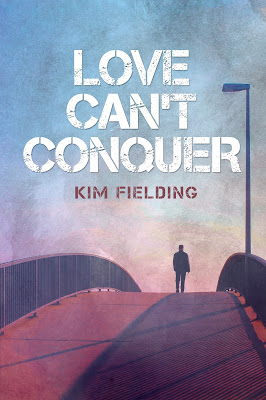 Bullied as a child in small-town Kansas, Jeremy Cox ultimately escaped to Portland, Oregon. Now in his forties, he’s an urban park ranger who does his best to rescue runaways and other street people. His ex-boyfriend, Donny—lost to drinking and drugs six years earlier—appears on his doorstep and inadvertently drags Jeremy into danger. As if dealing with Donny’s issues doesn’t cause enough turmoil, Jeremy meets a fascinating but enigmatic man who carries more than his fair share of problems.

Qayin Hill has almost nothing but skeletons in his closet and demons in his head. A former addict who struggles with anxiety and depression, Qay doesn’t know which of his secrets to reveal to Jeremy—or how to react when Jeremy wants to save him from himself.

Despite the pasts that continue to haunt them, Jeremy and Qay find passion, friendship, and a tentative hope for the future. Now they need to decide whether love is truly a powerful thing or if, despite the old adage, love can’t conquer all.

Night had fallen some time ago, and the black sky spit cold, stinging raindrops, making Qay shiver as he descended from the loading bay onto the street. He had to walk a couple of blocks to his first bus; he’d be soaked and miserable by then. Wouldn’t it be nice if someday he could afford a car? Although he’d always lusted after muscle cars, he’d be happy with even the most basic little econobox as long as it ran and kept him dry. He certainly didn’t need anything as burly as the dark SUV parked a few yards away.


Just as he realized that he recognized the SUV, the driver’s door opened and a big man in a green uniform slid out. Qay froze in place. The man walked over until he was just out of arm’s reach, and then he stopped.


Jeremy’s grin was small and tight, but it was there. “We’re getting soaked. Can we have this conversation in my car? I’ll crank the heat.”


Not trusting himself with words, Qay simply nodded. When Jeremy held the passenger door open, something lively fluttered in Qay’s chest.


They sat silently in the SUV for a long time, fogging the inside of the windshield. The radio was off, but the fan blew full blast. Qay watched rain droplets fall from his hair onto his lap. They left little circles of darker blue on the denim.


“Yeah. That’s why I worked late.” He snuck a peek at Jeremy from the corner of his eye. “Have you been here since five?”


“Four thirty, actually. And I’ve had to pee for at least half an hour.”


“I could probably talk the security guard into letting you into the factory. The bathroom’s pristine. I just cleaned it.”


“I guess I can hold it a little longer.”


Qay nodded. He glanced at Jeremy’s right hand, which lay on the console between them, and saw that the knuckles were scabbed and slightly swollen. “What happened?” Qay asked.


They were quiet again, the pause dragging on long past awkward. Then Jeremy cleared his throat. “How did the exam go?”


Qay couldn’t stop a wide smile. “I aced it. The prof even kept me after class to tell me I’m brilliant.”


A little of the tension between them eased. Qay picked at a thread on his slightly frayed jeans, then stopped himself and drummed on the armrest instead. “Why are you here?” he asked, looking through his window into blankness. “And how?”


“I used to be a cop, remember? You told me you work at a window factory in Northwest, which narrowed it down. I made some phone calls.” He snorted a laugh. “Didn’t want to get you in trouble or let you know what I was up to, but I remembered Stuart’s name and asked for him. I found him yesterday. Pretended I was a bill collector when he came to the phone. He was just about in tears—kept insisting he’d paid what was due on his credit card.”


The thought of Stuart nearly crying over an imaginary unpaid debt cheered Qay more than it should have. “So that’s the how. What’s the why?”


“I have… questions. And an apology, if I can man up enough to spit it out.”


Jeremy gave him a long look. “Let’s go somewhere, okay? I can piss and we can eat and… and we can talk.”


Maybe he was courting disaster, but Qay nodded. “All right.”