Bookblast: The Balance by Dusk Peterson 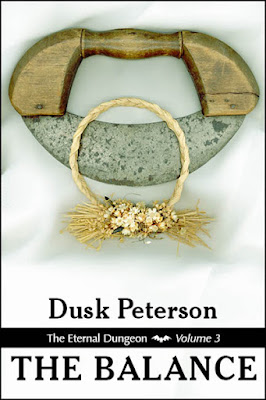 "'The Eternal Dungeon is my home now,' the High Seeker said. But as he spoke, he lifted his face and looked at the Vovimian carving, as a man might look at a beloved he must leave forever."
The Seekers (torturers) in the Eternal Dungeon have always expressed contempt toward the Hidden Dungeon in the neighboring kingdom of Vovim, whose torturers abuse prisoners without restraint. But the balance between mercy and hell is not so clear as might be thought in either dungeon, and now that balance is about to tip. Only the strength of love and integrity will determine the paths of two Seekers whose fortunes are bound together.

A winner of the 2011 Rainbow Awards (within the "Eternal Dungeon" omnibus), this tale of love and adventure can be read on its own or as the third volume in The Eternal Dungeon, a speculative fiction series set in a nineteenth-century prison where the psychologists wield whips.

The Eternal Dungeon series is part of Turn-of-the-Century Toughs, a cycle of alternate history series (Young Toughs, Waterman, Life Prison, Commando, Michael's House, The Eternal Dungeon, and Dark Light) about adults and youths on the margins of society, and the people who love them. Set in the nineteenth and twentieth centuries, the novels and stories take place in an alternative version of America that was settled by inhabitants of the Old World in ancient times. As a result, the New World retains certain classical and medieval customs.


He had awoken, on that day after, to find himself lying alone in bed.

It had all been a dreaming, then: the promise of everlasting love, the passion that had followed upon that promise, the warmth of Elsdon's body – and more importantly, the warmth of his companionship. Layle had expected it to happen one day: his dreamings had become so real that he had begun to believe them.

He reacted automatically, which meant he reacted violently. Reaching toward the only loose object at hand – the night-table next to the bed – he grasped it by its leg, wrenched it from the floor, and had begun to swing it toward the intruder before he checked himself in time.

He opened his eyes. Elsdon, fully clothed and hooded but with his face-cloth raised, sat beside him. He looked, Layle realized with amazement, more amused than fearful.

"By all that is sacred," Elsdon said, speaking the mildest of oaths, "is this how you always greet your love-mates upon awakening?"


Layle slowly lowered the night-table, feeling the blood thunder within his body. "I've never had a love-mate before who slept with me."

"I can see why, if this is how you wake from your sleep."

Layle slowly raised himself into a sitting position. Elsdon was still smiling, he noted with growing incredulity. The Seeker-in-Training had made a joke about the fact that Layle was a killer born.