We broke ground on the first addition to our house when our twin sons were eight months old. They turn twenty-four this summer and the house is still not finished. Some doors still have no doorknobs. The trim is unpainted in random spots. The skylights in the kitchen are still rough drywall. I could go on.

This doesn’t bother my Curmudgeonly Husband—at least not enough for him to do anything about it. But CH is a “process” person. For him, the joy is in the doing, no matter how long it takes, and if he no longer gets pleasure from the doing, he simply stops.

My motto, on the other hand, is Done is good. That’s because I’m a “product” person. For me, the joy is in being done. I remember the rush I used to get in high school and college, when I finished writing a paper or completed a project. This was an occasion, damn it. It should be celebrated!

Sadly, there was seldom anyone around who either A) cared (“You finished. That’s nice.”) or could participate (“Are you crazy? I’m only half-way done with mine. I hate you. Now go away.”).

These days, my product persona kicks in big time when I’m writing. I’m a plotter, so when I sit down to write my first draft, I already have a detailed list of events laid out in Scrivener (I use Todd Klick’s Something Startling Happens beats, coupled with a plotting system devised by the awesome Suzanne Johnson). I start pounding out that first draft PDQ, in thirty-minute writing sprints. Every thirty minutes, I know I’ve gotten something done! High five, me!

Then, invariably, I hit—(cue ominous drums)—the Death Zone. The Death Zone is that spot in the story, more or less between 45% and 55% along. In other words, the big scary middle. Something major has to happen, but even though I know what that something is, even though I’ve plotted both the in and the out, the Zone still body-slams me. Every. Freaking. Time.

It’s a totally a mental game. I know it, but that doesn’t make the experience any less agonizing. This is the spot where process and product collide. I’ve gotten past the first excitement of building the story, but I’m not far enough in yet to see the finish line. Imagine the middle of the story as a mountaintop, and I’m Sisyphus, shoving that rock up the final slope. Will the rock roll back and crush me, or will I make it over the top to the other side?

But I keep slogging, keep pushing, and once I’ve passed the 55% mark, it’s all downhill, like the last swoop of a roller coaster. When I get to that last beat and type The End?

Then I reboot my brain and start up the next mountain, pursuing another product . . . in my still unfinished house. 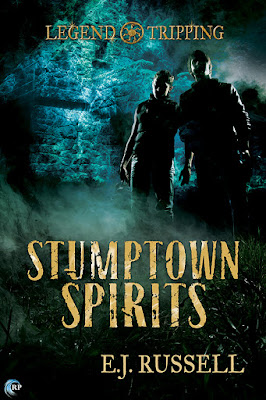 What price would you pay to rescue a friend from hell?

For Logan Conner, the answer is almost anything. Guilt-ridden over trapping his college roommate in a ghost war rooted in Portland’s pioneer past, Logan has spent years searching for a solution. Then his new boyfriend, folklorist Riley Morrel, inadvertently gives him the key. Determined to pay his debt—and keep Riley safe—Logan abandons Riley and returns to Portland, prepared to give up his freedom and his future to make things right.

Crushed by Logan’s betrayal, Riley drops out of school and takes a job on a lackluster paranormal investigation show. When the crew arrives in Portland to film an episode about a local legend of feuding ghosts, he stumbles across Logan working at a local bar, and learns the truth about Logan’s plan.

Their destinies once more intertwined, the two men attempt to reforge their relationship while dodging a narcissistic TV personality, a craven ex-ghost, and a curmudgeonly bar owner with a hidden agenda. But Logan’s date with destiny is looming, and his life might not be the only one at stake.

To celebrate the release of Stumptown Spirits, EJ is giving away $25 in Riptide credit. Leave a comment to enter the contest. Entries close at midnight, Eastern time, on May 21, 2016. Contest is NOT restricted to U.S. entries. Thanks for following the tour, and don’t forget to leave your contact info!