Have you ever had one of those days? The kind where everything flows and you can’t stop working because the energy is so good and you just write and write and write…

That’s how I felt when I wrote the Men of Falcon Pointe, Becoming Rafe especially. I love getting involved with series where the main characters interact as secondary characters in other books. It allows me to bring in my favorite characters again and again. In this case, if you’ve read the first two books in the series, you’ve gotten to know the men who live at 959 Brenton Street. In Becoming Rafe, there is still interaction with those characters, but Rafe lives at the local University which just really opened the story up so much for me, allowing more of a look at the town as a whole. And yeah. I wrote the first draft in like 3 days.

When that kind of thing happens, even if I write for 20 hours straight, I feel energized and have a hard time sleeping because I want to get back to writing. Gerbil meet speed. And there’s no caffeine involved. Actually, me on caffeine could be scary :) 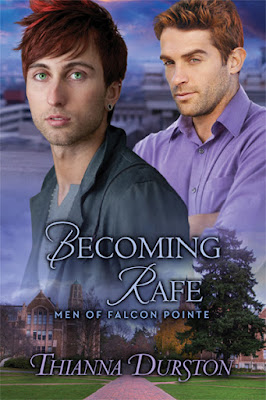 Eighteen-year-old Nephi Norton goes to Falcon Pointe University to find himself. Away from his conservative family, he hopes to discover if his attraction to men is the real deal. Encouraged to be someone a little different, he starts using his middle name. “Rafe” quickly makes friends, some of whom use a paddle to dispense caring discipline, and he lives it up—until midterms hit and he realizes he’s flunking statistics class.

When Scotland native Éigneachán Jackson Levlin offers to help, Rafe is eager to accept—not only because Levlin is a psychologist, but also because he’s out and proud and hot as hell.

As their relationship heats up, Rafe decides to spend one last Christmas with his family before he tells them. When his little sister outs him to his siblings, they turn out to be fully supportive, and he takes heart—until he introduces Levlin to his father, who brutally dismisses both of them. Now Rafe must come to peace with his father’s rejection or risk losing Levlin—and all he has become at Falcon Pointe—forever.


Rafe’s first week of school was eventful. He’d changed his identity, got a little stupid at a gay club, met a lot of really sexy gay men, and his roommate and good friend were signed up to have sex on camera. Mark had told him to enjoy himself. Rafe assumed those things counted.

The next few weeks followed the same precedent. He hadn’t told Finn and Santi that he watched their videos, but he had. Normally he wouldn’t have been able to afford it, as the site charged by the minute. But Finn had their scenes burned to disc and left them on top of his dresser. Rafe had watched them all at least once. Neither of them had had anal sex yet, but watching them give each other or other guys blow jobs made him so hard he had to rush to the bathroom each time to take care of things. Some days he felt chafed. Plus his schoolwork was not getting done as well as it should.

Two weeks before midterms, his statistics professor informed him he was failing the class. If he failed, he’d lose his scholarship and go on academic suspension. His freedom would be gone. He’d have to go back to Moab, Utah and play the good little Mormon boy getting ready for his mission.

Dazed, Rafe wandered across the quad. “Damn,” he muttered, and kicked a stick that lay in his path.

“Whoa, Rafe.” The accent sent excitement rushing through him, and Rafe looked up into Levlin’s concerned face. “Are you all right?”

Thianna Durston is a writer by day and supernova by night. Or at least that’s what the faeries tell her. And who is she to deny those pesky *cough* lovely little creatures?

She lives in the Pacific Northwest, though her heart belongs elsewhere. In the meantime, until she can return to the place she calls home, she happily lives in a city that still thinks it’s a small town. Thankfully, it has given her muse lots of amusing places to start a story.