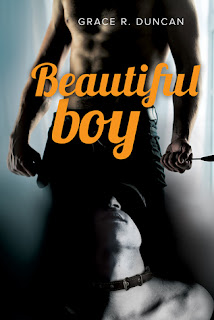 
Malcolm Tate hung up his flogger when his submissive sought out another Dom and landed in the hands of a serial killer. Convinced his lack of dominance sent his sub away, Mal has spent two years blaming himself for what happened. But when his best friend finally convinces him to go back to the local dungeon, Mal’s grateful. Especially when he wins beautiful, submissive, firmly closeted Kyle Bingham in a charity slave auction.

College grad Kyle hasn’t earned enough to move out of the loft his conservative, homophobic parents bought, much less to buy any of the other things still in their name. When he’s won at auction by the hot, amazing Mal, he’s shocked that anyone would want him. No one else seemed to—not his parents, his former Doms, or any of his disastrous dates.

But Mal does want him and Kyle lets his guard down, only to be outed to his parents. With his world crashing down, he must find a way to trust Mal—and their developing relationship—or risk losing everything.

This is a tender story about Malcolm, who lost his sub two years prior and has always blamed himself, and Kyle, a young sub from a wealthy family who hides in the closet so his parents don't disown him.

Mal is a real Dom. He lives the lifestyle full-time. Kyle is insecure and wants to belong to somebody. When Mal wins Kyle in a "slave" auction for charity, their connection is immediate, both as partners and as Dom/sub.

Mal is a caring Dom, but Kyle doesn't trust that he's worth keeping. There's some drama at the end with Kyle's family, but the story ends with a nice HEA.

There comes a time when you have to choose between turning the page and closing the book.