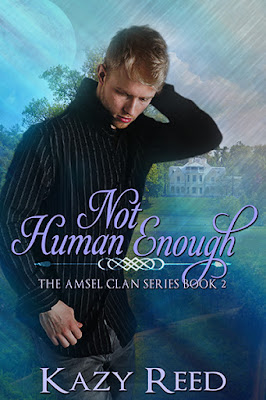 Jake Reinbach is the son of vampires. He is also a high-school senior, hoping to live as normal a life as possible within the human world, but his bright purple eyes and vampire parents make him an outcast. When falsely accused of threatening a classmate, Jake is forced to withdraw from school, and back into the clan in which he was raised. He is devastated, but a young human comes to his door one evening with a startling confession.

Will Hayden is secretly attracted to Jake, and is bereft when the young vampire leaves public school. Fascinated with immortals, Will unfortunately lives in a household where hatred of vampires is part of the daily diet. He realizes his father is entangled in a conspiracy against the vampires, and he goes to Jake's family and tells them of his suspicions. When he then confesses his feelings toward Jake, he sets in motion a series of events that will change his life—and Jake's—forever.


I spent the next afternoon impatiently tapping my foot and eating. When I reached for a blob of raw cookie dough, Lowner smacked my knuckles with a wooden spoon.
"For the love of Fred and Ginger!" he barked. "Will you please go wait for him someplace else?"
"For him? What are you talking about? I'm not waiting for anyone."
Quincy raised an eyebrow and coughed out, "Bullshit!"
"Quincy!" my mother screamed from upstairs. "Watch your mouth in front of the children."
"Oh my God, Mom! I'm eighteen. I can swear if I want."
She called down, "Doesn't mean I won't smack you for it, but feel free to try."
The dogs began to bark and I shot out of my chair, caught my foot on the corner of the table, and nearly fell on my ass. Quincy and Lowner both snorted and chuckled. I narrowed my eyes at them and limped from the room. I was still scowling when I opened the door.
"Hey Jake," Will began. When he saw my expression, he looked worried. "Everything okay?"

"Just basking in the joy of being a perpetual child in the eyes of my mother."
"I heard that!" she called.

Kazy Reed grew up on a small island off the Maine coast. At the age of sixteen, she announced to her parents that she was going to move to Denmark for six months as an exchange student. That trip changed her life, and sparked her love of travel, languages, and art history.

Kazy now lives near the coast of Maine, with her very understanding husband and two ridiculously precocious children. In addition to her published work, she is the author of a weekly flash-fiction series on her blog.