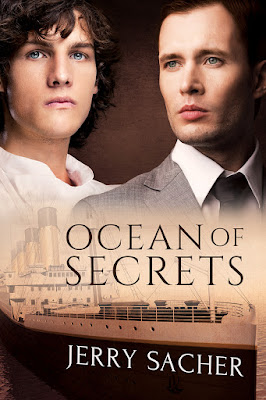 Andrew Elliot, the son of a Scottish Nobleman, is sent to America accompanied by his fiancée and her brother. But theirs is no love match. Andrew's family insists that he marries to 'cure' him of his feelings for someone else--the son of the caretaker on his father's estate.

Matthew Ahearn, newly orphaned, dreams of Texas and cowboys. He lands a job as a third class steward on a ship bound for America, and it is there that his and Andrew's worlds collide. The two men--and their secrets--are brought together, lost in the magic of an ocean voyage, one that will always be remembered.

I have been interested in the Titanic since first grade, when I was first able to read a book about the ill-fated liner. The stories of the passengers and crew who were there have always fascinated me. I always wanted to write one of my own, and to tell in my own way a story that, until now, hasn't been told: the romance between two men with the great ship as the background of their world.

There was known to have been at least one gay couple traveling on the Titanic: a young man in second class named Albert Fynney, who was accompanied by a male companion named William Gaskell. Both of them were the subject of many rumors that had circulated prior to boarding the liner.

A first class passenger, noted artist Frank Millet, wrote to a friend back home from the ship from the last port of call--Queenstown, Ireland--describing "A queer lot of people" and "Plenty of our kind" of people among the passengers. Who could he have been talking about? My antagonist, Andrew, is befriended by Mr. Millet. Could he have met someone like Andrew and written to his friend about him from the ship? It's possible.

The story begins with Andrew Elliot, the son of a Scottish nobleman, engaged to a woman he doesn't love, and being sent to America aboard the Titanic, chaperoned by her brother. The hasty match has been arranged by Andrew's parents in hopes he will get over his feelings for a young man on the family estate, and to keep the family from scandal.

On the Titanic, he meets a young crewman named Matthew, who has secrets of his own. The lives and fates of all of them are thrown together on the night of April 14, 1912. Who will survive?

Here is a short excerpt:

“Come on, jump and I’ll follow you!” He shouted above the rumbling noise that was coming from all around them. Matthew held onto Andrew’s hand for a brief second, squeezing, and each, giving the other silent encouragement. Then Matthew jumped, Andrew watched him hit the water that was now only a few feet below. Andrew took a step off the edge of the deck and leaped. The water was bitterly cold, like a thousand knives being driven into his body. He could barely breathe, but he had to find Matthew. Andrew looked behind him as the lights blinked and went out and the ship towered above him in the darkness. People were jumping, splashing near him, crying out.

He thought he heard someone calling out his name,so he swam toward the sound. He only got a few feet away, when he found himself being showered with pieces of glass, wood, and scraps of metal and sparks; the screech of tortured steel drowned out all other noise, except the voice that persistently called out his name. An arm reached out, grabbing at him and pulling him under, but he somehow managed to break free. He came up next to a collapsible boat with a handful of people inside huddling together and watching the scene unfold in front of them. Andrew hung onto the side of the boat and followed their gaze.

I hope you enjoy reading Ocean of Secrets…

There are a lot of advantages and disadvantages about writing historic fiction. The biggest advantage for me is the research. Since I enjoy history I get to read about a lot of time periods that I had previously known nothing about. Being interested in the Titanic I discovered a couple of things I didn't really know before. Only the more expensive cabins in first class had a private bathroom/water closet. The rest were shared facilities. There was no fresh water to bathe in, only hot and cold salt water.

In 1912, even though there were telephones, phonographs, and motion pictures, slang phrases or common expressions varied from place to place. Much like today, a word that means one thing in America could have a different meaning in England. So it was difficult not to let modern words or phrases slip in to the dialogue while I was writing Ocean of Secrets.

I currently live in Chicago with my husband, Dean, and our two rambunctious cats, Monty and Nicky. I've been actively writing for the past six years. I'm interested in Titanic and all periods of history, and I have also published a novel set during the Russian Revolution.

You can follow me on Twitter and on Facebook on my The Saint of San Francisco page. Keep up with me on my website, JerrySacher.com, for more news about Ocean of Secrets and my other projects.