Author Of The Month - Rick R. Reed - Week One

In today's post, we'll talk about Chaser, Raining Men, and Rick's latest release, Big Love, plus Rick's favorite things. Of course, all the way at the very end, there'll be a chance to win, too! WOOHOO!!!


First up, let's take a look at Chaser 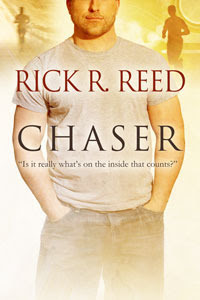 Caden DeSarro is what they call a chubby chaser. He likes his guys with a few extra pounds on them. So when he meets Kevin Dodge in a bar bathroom, he can’t help but stare, even if he does make an ass of himself. As far as Caden is concerned, Kevin is physically perfect: a stocky bearded blond with a dick that’s just right. (They met in the bathroom—of course he looked!) But Caden gets tongue-tied and misses his chance.

When Caden runs into Kevin one night on the El train, he figures it’s fate offering him a second shot. Caden manages to get invited back to Kevin's place for a one-night stand that turns into the kind of relationship he’s dreamed about.

But the course of true love never did run smooth, and Kevin and Caden’s romance is no exception. When Caden returns from a few weeks away on business, Kevin surprises him with a new and “improved” body—one that fits Caden’s shallow friend Bobby’s ideal, not Caden’s. Caden doesn’t know what to do, and his hesitation is just the opportunity Bobby was looking for. This isn’t the same Kevin he fell in love with… is it?


While I really liked this book, and two of the main characters, I absolutely hated Bobby. I read the second half of the book with rage and clenched fists because Bobby is an absolute asshole. With friends like that, who needs enemies?

I really wanted to hurt someone when I finished this book. Actually, not someone. Bobby. His behavior made me so angry, I made a new shelf especially for him - sucky friends are sucky.

This book was my first exposure to Rick R. Reed, one I picked up during a tweetaway from the publisher. It languished in my TBR for a while, but I kept seeing it pop up on my feed, and one of my co-bloggers had read it, so I finally opened the file on my Nook.

And didn't stop reading until the very end. It sucked me right in and didn't let me go, laughing and crying and ranting and cheering and wtf'ing throughout.

And the sequel, Raining Men 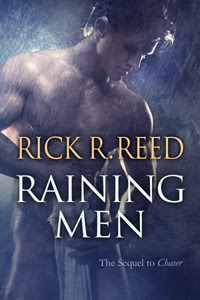 It’s been raining men for most of Bobby Nelson’s adult life. Normally, he wouldn’t have it any other way, but lately something’s missing. Now, he wants the deluge to slow to a single special drop. But is it even possible for Bobby to find “the one” after endless years of hooking up?

When Bobby’s father passes away, Bobby finally examines his rocky relationship with the man and how it might have contributed to his inability to find the love he yearns for. Guided by a sexy therapist, a Sex Addicts Anonymous group, a well-endowed Chihuahua named Johnny Wadd, and Bobby’s own cache of memories, Bobby takes a spiritual, sexual, and emotional journey to discover that life’s most satisfactory love connections lie in quality, not quantity. And when he’s ready to love not only himself but someone else, sex and love fit, at last, into one perfect package.

Bobby’s Dream
THUNDER rumbles. Rain hisses. Flashes of lightning—brilliant and blue white—rip across the sky.
I know I’m dreaming, yet something about this whole scenario seems as real as the nose on my face, the hair on my head, the dick swinging between my legs.
In addition to the natural sounds of the storm, there’s another noise, and it makes me smile. Music. Rising. Percussion. Disco beats. And the powerful wail of Martha Wash and the Weather Girls singing “It’s Raining Men.”
I’m standing under some kind of awning—red, canvas—watching the rain pour down not in drops, but sheets. Blinding. The flashes of lightning are like a disco strobe light, revealing in flashes of blue and silver, a darkened cityscape. Night. But a netherworld cityscape, blue gray, unreal.
It’s the music that makes me want to move out from under the awning. The music that has me smiling, my hips, head, and arms in synchronized rhythm with the beat.
Glorious!
Even the rain, a cold shock to my naked body, isn’t enough to keep me from driving myself out into the downpour to dance to the song, which has long been a favorite of mine.
What a delicious notion—raining men! Men falling from the skies! More men than one can shake a stick at (or something that rhymes with stick, heh-heh).
I look up into the midnight-blue clouds, my mouth and eyes open to the water pouring down, and I see it: the first of the men.
I stare in wonder as he drops from the sky. A blond Adonis, smooth and muscled, allover tanned with a dick thick, long, and perfectly hard, pointing back up at the sky. He lands somewhere outside my vision, and I dance, spinning toward where I saw him fall, hoping to find him where he has landed so I can say hello, reach out and touch him.
But before I can make any progress, another man falls from the sky. This one is hirsute, bearded, husky but hard-muscled, putting me in mind of the actor Jeffrey Dean Morgan. He smiles. Before I can even smile back, other men tumble from the skies, and I want to laugh, cry out in jubilation at my good fortune.
It truly is raining men!
Hallelujah!
They start raining faster now—blonds, redheads, brunets, black, white, Asian, Latino (yum), lanky, beefy, short, tall—all the most gorgeous men I have ever seen. All naked.
All for me!
I raise my arms and shout, “Come to Papa!”
And they do.
The first body hits me hard, feeling more like a ton of concrete instead of the delicious marriage of sinew, skin, and bone that I have come to know and love as the male form. I collapse to the ground, wind knocked out of me, and look up at the man who has rained down on me. He seems to have no awareness that I am beneath him, and I scurry to get out from underneath the crushing weight threatening to suffocate me, pressing my bones into the wet concrete beneath my back.
I manage to get out just as another man drops from the sky, a hot African American, bald, and looking just like Taye Diggs. I scramble free of his path, but he lands on my leg anyway as I crawl through the rain-slicked street.
I hear my leg break with a sickening crack. It takes only seconds for the pain to radiate throughout my entire body.
I roll over, gasping, wincing, groaning, and look up to see an entire sea of naked men falling from the sky in ever-increasing velocity—all headed straight for me.
The music reaches a crescendo in time with my shrieks.
BOBBY NELSON woke.
The sheets beneath him were twisted and damp with sweat. He gasped, trying to regulate his heartbeat, which was jackhammering so hard he expected to look down and see it lifting the skin off his chest. A cartoon heart.
The room was silent.
Where did the music go? Martha? Weather Girls?
Where was the rain? The thunder?
He breathed in deeply and exhaled slowly.
Calm.
Just a dream. A nightmare.
Where are all the men?
Finally, he grinned, turning over in his bed.
Why, there’s one! Lying right next to me, looking at me with a concerned face, a handsome face. Even in a darkened bedroom, Bobby could still tell if they’re hot or not. It was his specialty.
This one, with a mop of curly blond hair and pecs like Michael Phelps, was a ten.
His voice was husky, sleep-choked. “Dude. You were having a nightmare. You okay?”
He placed what was meant to be, Bobby was sure, a comforting hand on Bobby’s chest. Bobby cringed a little, moving away.
This has never happened before.
I have no idea who he is.


Before Bobby could stop the words from tumbling out of his mouth, they came. “Who the fuck are you?”


Early on in this book, we learn that the self-proclaimed gorgeous guy who only has sex with other gorgeous men (or so he told his ex-friend Caden before attempting to steal Caden's boyfriend for himself) will actually have sex with almost any men. The author does a fantastic and unapologetic job of accurately and in depth describing the seedy situations that Bobby seeks out, all the while giving us insights into Bobby's mind as to the deep-seated issues that propel him to seek pleasure in all sexual forms relentlessly. What Bobby doesn't seem to see, or suppresses as soon as even the tiniest thought about it crops up, is the reason he seeks out these seedy places.

By this point in the novel, I was both disgusted by his behavior and oddly compelled to take him home with me to hug him and love him and tell him that it would all be okay. He misses Caden. He knows he's guilty, and he knows that losing the friendship is his fault and his fault alone. 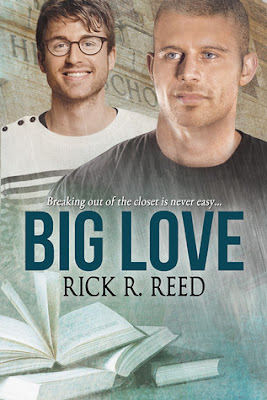 Teacher Dane Bernard is a gentle giant, loved by all at Summitville High School. He has a beautiful wife, two kids, and an easy rapport with staff and students alike. But Dane has a secret, one he expects to keep hidden for the rest of his life—he’s gay.

But when he loses his wife, Dane finally confronts his attraction to men. And a new teacher, Seth Wolcott, immediately catches his eye. Seth himself is starting over, licking his wounds from a breakup. The last thing Seth wants is another relationship—but when he spies Dane on his first day at Summitville High, his attraction is immediate and electric.

As the two men enter into a dance of discovery and new love, they’re called upon to come to the aid of bullied gay student Truman Reid. Truman is out and proud, which not everyone at his small town high school approves of. As the two men work to help Truman ignore the bullies and love himself without reservation, they all learn life-changing lessons about coming out, coming to terms, acceptance, heartbreak, and falling in love.

Rick R. Reed is all about exploring the romantic entanglements of gay men in contemporary, realistic settings. While his stories often contain elements of suspense, mystery and the paranormal, his focus ultimately returns to the power of love. He is the author of dozens of published novels, novellas, and short stories. He is a three-time EPIC eBook Award winner (for Caregiver, Orientation and The Blue Moon Cafe). Raining Men and Caregiver have both won the Rainbow Award for gay fiction. Lambda Literary Review has called him, "a writer that doesn't disappoint." Rick lives in Seattle with his husband and a very spoiled Boston terrier. He is forever "at work on another novel."


Thanks for celebrating with us. Join us again next week for more on Rick's books, five little-known facts about Rick, and another chance to win!