Bookblast: The Butcher, The Baker, The Candlestick Maker by Rob Rosen

The Butcher, The Baker, The Candlestick Maker 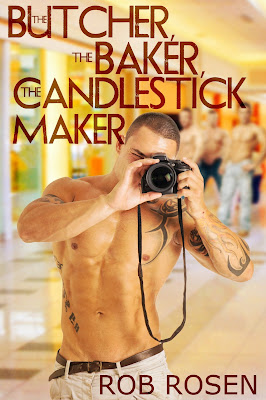 
I’d always enjoyed photography. Even as a kid, I’d borrow my dad’s Polaroid and take off to shoot the neighborhood. Now in art school, nothing had changed much. If anything, the passion burned brighter. And so it wasn’t by chance that I enrolled in the photography class that semester, but perhaps fate did play a role in what eventually transpired.
My homework assignment that particular day was called, very simply, “trios.” We could use our fertile imaginations to interpret this any way we wanted to. Me, I wanted to go all out—balls to the wall, as it were. In other words, I wanted an A. And so over the weekend, I biked around town, looking for anything that stood out, anything iconic but unusual just the same.
A pizza parlor, perhaps? Mushroom, pepperoni, and anchovy? Too easy, I figured. Street lights, maybe? Red lights, green lights, yellow lights? Too, uh, pedestrian. How about kids, parents, and grandparents, I thought? Well, they said never to work with children or animals. I couldn’t have agreed more. In other words, nix on that idea, as well. Besides, approaching children and asking to take their picture was never a wise idea.
No, I had to dig deeper, find something unexpected but fun to photograph, something no one else in my class was going to come up with. And so I ended up at Old Times, a local mall dedicated to days gone by. Which, to be quite frank, was generally just another way for the stores to charge extra for crap no one needed. Still, I reasoned, my inevitable photographs would be out of the ordinary.
I looked around, my high-end digital camera at the ready. Luckily, I spotted my prey right off the bat, their storefronts side by side by side. The butcher was on the left, the candlestick maker on the right, the baker in the middle.
Iconic—check. Trio—check. It seemed like I was good to go.
“Whoa,” I whispered as I entered the butcher shop, mainly because the butcher was one mighty fine slab of meat. Grade A prime, in fact—and with one hell of a rump roast to boot. He was dressed in 1930s garb, the uniform tight and white, hugging him in all the right places¬. Then again, by the looks of him, he had no wrong ones to begin with. He had on a fancy straw hat, a white bow tie, a white apron, and heavy black shoes. The sleeves of his white button-down were rolled up to reveal meaty forearms covered in a thick blond down.
In truth, we couldn’t have looked more different. He had three inches and a good thirty pounds on me. He was blond to my brunette, blue eyes to my brown. Plus, he was easily seven or eight years older. Still, in my randy imagination, we made a picture-perfect couple. And since I took perfect pictures, I knew of what I spoke. Cart before horse? Fine, so sue me.
Anyway, he smiled when I approached, his teeth as white as his clothes, gleaming and perfect, eyes a dazzling blue. And when he spoke, “Welcome,” it was with a beautiful, trilling Eastern European accent of some kind. Polish, maybe? Slovakian? Fuck if I cared; it was sexy either way. “Can I help you?” he asked, the smile so bright I very nearly put my sunglasses on.


Hell yeah, I thought, but told him instead the reason for my visit: that I wished to film him for my class. He smiled when I was done and said I could take some pictures when the shop closed at six. Then we wouldn’t be interrupted. I gulped when he said it, mainly because those stunning orbs of blue were locked in on me like a meat hook to a side of beef. I thanked him and told him I’d be back at six.
All the above I repeated at shop number two—the same spiel, the inner monologue only slightly different.
The baker was thin and dreamy, with a white chef’s hat and a white button-down shirt, which was opened at the collar to reveal just the slightest hint of ginger chest hair. Over this, he wore a pristine white apron. His eyes sparkled like green emeralds as he nodded my way, his crisp white uniform showing off his physique as he dexterously stocked the shelves with a beautiful array of fresh pastries and cookies. When he spoke, it was with a lilting Irish brogue that made my cock throb in my jeans. In the end, he invited me back first thing in the morning, before he started baking.
All the above I then repeated at shop number three. By then I had my story down pat.


The candlestick maker’s outfit was the most unusual of the three. He wore not a stitch of white. His shirt was a blousy blue, his vest a clover green, his slacks a muddy brown, and his shoes, heels and all, were a midnight black. His smock, which was covered in wax, was also black, to perfectly match his beret. He wasn’t stocky like the butcher nor thin like the baker, but dreamily average in both height and weight. He had brown hair and brown eyes, and spoke—be still my heart, and hard-on—in a posh British accent. I was thankful that he immediately locked up shop, agreeing to pose for me once he finished his work in the back, leaving me in the front to ponder my good fortune.

Rob Rosen (www.therobrosen.com), award-winning author of the novels Sparkle: The Queerest Book You'll Ever Love, Divas Las Vegas, Hot Lava, Southern Fried, Queerwolf, Vamp, Queens of the Apocalypse, Creature Comfort and Fate, and editor of the anthologies Lust in Time, Men of the Manor, Best Gay Erotica 2015 and Best Gay Erotica of the Year, Volume 1, has had short stories featured in more than 200 anthologies.