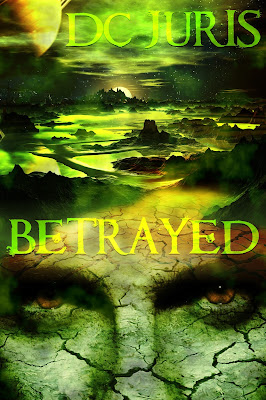 Two years after he lost his soulmate to the war, Faldor still pines for Meldrick. His world is turned upside down when Meldrick appears on his doorstep late one night, seemingly back from the dead. Finally escaped from a prison camp, Meldrick protects a dark secret--one that could rip his rekindled love apart if Faldor ever learned the truth. But the longer they're together, the more things just don't add up. What really happened two years ago? How did Meldrick escape the prison camp after so long? Is Meldrick still the man Faldor

fell in love with? Can Meldrick reconcile who he has become with who he was, and move beyond his treachery, or will betrayal win?

Faldor frowned. What had moved him to invite Yanek to his house for dinner—and, indeed, how he'd forgotten the damned invitation—he didn't know. But he regretted it. He focused on his food—a fine tarkin stew, even if he did say so himself—and tried to make interested noises at all the appropriate moments while Yanek prattled on.
Not that it would've mattered if he hadn't. Yanek loved nothing more than the sound of his own voice. The elf was easily the most vain, self-centered, and singularly annoying person Faldor had ever had the misfortune to meet. His constant bids for Faldor's attention and attempts to win himself a place in Faldor's bed didn't endear him to the healer, either. Still, bad company was better than none on a lonely night like this. Especially after the forest earlier.
"What happened in the forest today?" Yanek asked, as if reading his mind.
Faldor glanced up at him. "Nothing."
"That's not what Sir Nomah said. I heard he and the men had to pluck you from the midst of the trees." Yanek made a grabbing gesture with his right hand and laughed.
"No one plucked me from anywhere," Faldor growled. "Nothing happened."
"What drove you in there in the first place?"
Faldor met the elf's gaze, raised his eyebrow. "Why does it matter?"
Yanek shrugged and lifted a forkful of dinner to his mouth. He chewed and swallowed, then shrugged again. "One of the men said he thought he heard you call Meldrick's name."
Faldor glared, irrationally angry Yanek had dared to speak his lover's name. "Meldrick is dead. Why would I call out his name?"
"You tell me."
"There's nothing to tell." He cut into a piece of meat and stabbed it up.
"If you suspect—"


"Drop it."
Yanek stared, mouth agape, for several seconds, then pursed his lips together into a thin line. "His body was never found," he said quietly. "There are prison camps."
Faldor looked up at him. "What do you know of the camps?" Ogre camps were rumored to exist, but no one had ever found one.
Yanek paled and shook his head, fumbling with his utensils. "Nothing. Nothing more than anyone else does."


How true the elf's words were, Faldor didn't know. He suspected, though, that Yanek had more knowledge than he admitted. Was it possible Yanek had been withholding information from him all these years? Faldor sat back and folded his arms across his chest. "Nothing more than anyone else, hmm? That's good to know. I'd hate to learn a trusted comrade had kept the secret of the king's own favored knight's whereabouts to himself. For three years. Such would not sit well with his majesty."