Blogtour: Under A Sky Of Ash by Brandon Witt

Under A Sky Of Ash 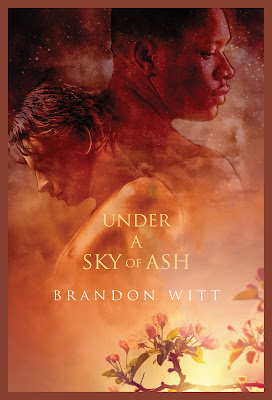 More than a decade after leaving Colorado to attend college and escape his past, Isaiah Greene moves back and builds a life in Denver as a special education teacher. When he meets Ben Woods, the mentor of one of his students, the attraction is immediate. The revelations that they’ve both suffered traumatic childhoods form a bond between them.

Raised by an abusive grandmother, Ben is a recovering addict who has made a family with his construction worker boss, Hershel, and Hershel’s husband, Daniel—drag queen ManDonna. Adding Isaiah to his life gives Ben a glimpse of a future he’d never dreamed possible for himself.

Both Isaiah and Ben are survivors, but when guilt drives a wedge between them, the past threatens to end their relationship.

Ben and Isaiah embark on journeys of self-discovery. Though their path will be difficult at times, humor and love find a way to bring light to the darkness.

Under a Sky of Ash will be my seventh novel. After seven books, I’ve picked a up a few favorite characters. Most of the time, those characters are ones who were supposed to have a small role in the book or simply play background, then refused to follow directions and took over every scene they were in. ManDonna, the drag queen, was one of those characters. There wasn’t a scene she was in that didn’t leave my laughing. She never felt like someone I was writing. Her words never felt like they came from me. She just told me what to say. There is something to freeing about that type of experience. 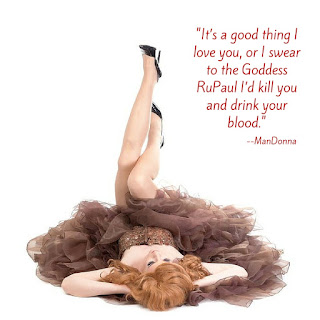 In the following scene, Ben Woods (one of our lovers) is talking to his makeshift family—Hershel, his boss, and Daniel (ManDonna), Hershel’s fiancé. Hershel and Daniel are in the middle of wedding planning and Ben has come over to help. Hershel and Daniel have just learned that Ben gave his abusive grandmother money, again. The scene may be a bit confusing since you don’t yet know these characters, but I just wanted to give you taste of why I love ManDonna (Daniel) so very much!

The expression of contempt on Daniel’s face made him look like ManDonna, even without the makeup and wig. “It’s a good thing I love you, or I swear to the Goddess RuPaul I’d kill you and drink your blood.”

“What do you expect me to do? She’s family.” Dumb question.

Daniel stood up from his kitchen table, knocking a few scattered sheets of paper to the oor. “Oh, no, you didn’t. You did not just refer to that bitch as family.” With his hands on his hips, he whipped his head toward Hershel, who sat on the other side of the table. “Help me out.”

Hershel just shook his head. “Nope. I yell at him at work, and you yell at him at home.” The glare he gave let me know his threat wasn’t just a dramatic statement. “However, if I’m paying you so much that you have enough to throw away on a waste like that, I might need to recheck the books.”
I hopped back in my chair, my elbow hitting a stack of papers and knocking them to the floor. “She’d just keep calling.”

He pointed at my feet. “Don’t tell me you just knocked off a bunch of my wedding plans and are gonna leave them scattered on the floor.”

I gestured back at the mess around him. “What do you call that?”

“It’s my wedding!” Daniel took another handful of paper and threw it in the air like confetti. “I can do anything I want with the plans! You, on the other hand, had better get on your knees and pick them up.”

I smirked at his tirade. “Yeah. Like that’s why you want me on my knees.”

He sucked in a Scarlett O’Hara worthy gasp. “How dare you talk to your Momma like that!” Daniel glared over at Hershel once more. “I’m gonna kill her.”

I burst out laughing, the ridiculousness of it all washing over me. Try as he might, Daniel began to giggle as well.
Hershel let out a sigh. “I’m going to leave you two biddies to it.

Might see if there’s a game on or something. Or at least a beer in the fridge.” He stood up, careful not to dislodge any more of the paperwork. “Oh, and honey, tell Ben about our new addition to the reception.” With an oddly satisfied grin on his face, he walked over to the fridge, retrieved two beers, and stalked off to the living room. A few seconds later, the television sounded. Daniel and I both listened, then grinned at each other. “Do you think Hershel really doesn’t realize that we know he watches old recordings of Top Model?”

Daniel shrugged, his smirk still in place. “We all have our little quirks.” He pointed to my feet once more. “Now pick up those papers.”

I followed directions. “So there’s a new addition to the wedding? I’m not even sure how that’s possible. You already had a full-fledged rodeo going.”

At his nonresponse, I looked up at Daniel.

“I’m going to pretend you didn’t just compare my upcoming holy nuptials to a place where breeders go to eat funnel cakes and abuse sheep.”

“Didn’t you meet Hershel at the gay rodeo?” I knew he had.

He lifted his chin. “I thought he was a sheep.”

Daniel’s smile widened, and he waggled his fingers together in front of his face like an old-school villain. “Well, my darling fiancé is providing me with a wedding present of sorts. You may have noticed that I think Jake, our dear stupid construction worker, is a bit of a sexpot?”


I groaned. “Please don’t tell me there’s going to be a sexual harassment lawsuit that goes along with this present.”

He batted his eyes. “Well, Hershel simply explained to Jake that he’d cost the company a lot of money already. Times are tough. We have a wedding to pay for. So in order to help bring the cost of said nuptials down enough to not have to make certain... sacrifices at the company... Jake might be able to lend a hand. Or something.”

I let the pause drag on a bit, knowing Daniel was enjoying the drama. “You’re not taking him on the honeymoon, are you?” “Don’t be tacky.” Daniel sat back down at the table. “Let’s just say, the platform for the star go-go boy at the reception is no longer accepting applications.”

“Don’t be dramatic. Momma knows best. Besides, what straight boy doesn’t secretly love being ogled by a horde of gay men?” Daniel reached across the table and drew a purple sheet out of the mess. “Now take a look at the song list. Do you think our first dance should be ‘Sex and Candy’ or ‘Any Man of Mine’?”

Another gasp. “You bitch!” He glanced down at the paper, then reached for a pencil. “I’ll add it as an option.”