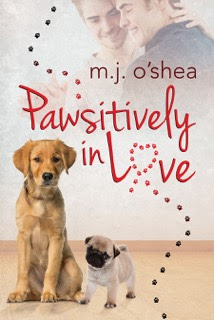 What Austin Lloyd lacks in academics, he makes up for in his love of the animals who frequent his pet salon. He’s not lucky in romance, though, and his family would like him to settle down with a good man. Austin—and his golden retriever, Maggie—couldn’t agree more.

Evan Partridge isn’t good at letting people in. His messy family life and the past that’s shaped him aren’t worth bringing up. But his pug, Dexter, sure likes the pet salon owner.

Austin and Evan get off to a rough start, but being friends soon turns into something more. Unfortunately, Evan’s secretive behavior nearly does the relationship in, and the budding love affair almost crashes and burns when Evan’s troubled sister shows up on his doorstep.

Not speaking to each other is killing them both, but Evan doesn't know how to keep Austin and help his sister at the same time. He just knows he has to try. Winning back Austin’s trust back, however, is going to take a whole lot of work.

Every writer needs down time every once in a while and it’s fun to watch a great movie or TV show for a little inspiration. We all have our favorites, so here are a few of my favorite go-to shows for a little bit of fun!


Sex and the City  -- If I had to pick a favorite show ever this would probably be it…maybe that makes me a cliché but I’ll own up to it ☺ When the show first started, I was a bit too young for the content (at least according to my mom) but I remember sneaking down to my parents basement to watch it. As far as inspiration goes, Rue (from One Small Thing) had a sassy shield to hide behind with tons of attitude and one-liners. I can definitely thank Samantha Jones for that!

Downton Abbey  -- I’ve been watching this show since it first started, nearly as long as I’ve been published. I know there are only a few episodes left and that makes me really sad ☹ I remember going back through early episodes and watching William when I was writing Tristan from Yorkshire in Macarons at Midnight. Eventually, in my head Tristan kind of turned into William.


Castle -- Someday…someday I will write a comedic odd couple mystery lol. It will happen! I love the quips and the one-liners, the Firefly references, Ryan and Esposito, and the fun mystery twists.

Sherlock – again with the quips and the twists and turns. <3 <3  Also, I love how Sherlock takes the original plots of the books and makes them completely modern. I think all writers could learn from Sherlock’s use of subtext and witty plotting.

Alias – Another old favorite…and just like with Castle someday I will write a science fiction-y spy series! There’s a lot of somedays in my head lol. I found this when it was already a few seasons in and I think I watched the entire first season in a weekend. I was totally hooked.

Greek – Not exactly like my typical taste…but in a way it is. I completely adore Greek’s witty writing, one-liners, fun characters, and the way the writers could create the most awkward situations possible for the characters (okay, mostly Rusty). I did a lot of hiding my face under the blanket on this one.

That’s it for me☺ Thanks for having me stop by! Info about my newest book and all my social media links are below!

M.J. O’Shea has never met a music festival, paintbrush, or flower crown she can stay away from. She loves rainstorms and a perfect cup of tea, beach days, music, bright colors, and more than anything a cozy evening with a really great book.

She is from the Pacific Northwest. While she still lives there and loves it, M.j. has the heart of a wanderer. So she puts all her dreams of far off places and extraordinary people in her books.

Except for every once in a while when she does what all travelers have to do on occasion… come home.