Blogtour: The Lusty Adventures of Theseus by Arthur Griffin

The Lusty Adventures Of Theseus

The first is I'm a big old nerd, and Greek mythology has always been near and dear to my heart. I've always loved all the trappings of the Greek legends: the gods, the magic, the dashing and scantily clad heroes. Bring. It. On.

Another reason is I love to write series (I'm a screenwriter by trade) and the Greek myth canon provided a heaping ton of fodder. What's more, they lend themselves well to the M/M world, since the stories are primarily dude-centric. There's even gay relationships in the original stories, but a lot of those have been straight-washed out of the versions we're used to hearing.

For example, did you know the character of Theseus, who kicked some mighty Minotaur-butt, had a male lover named Pirithous? Yeah, that part suspiciously gets left out of most tellings. Not mine, though. All the parts are left in (if ya know what I'm sayin').

The third and final reason is writing about guys having sex with each other is fun. And hot. I hope you enjoy reading the sex scenes as much as I had writing them. And trust, there are a LOT. So dig in. No need to be shy. 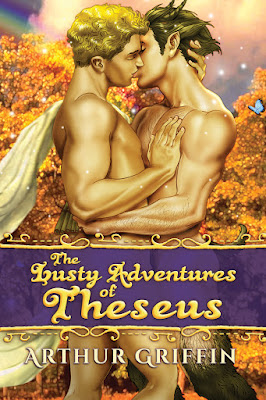 The myth of Theseus and the Minotaur has never been quite this steamy!

Handsome Theseus journeys to Athens to claim his birthright as heir to the throne, and along the way he meets the roguish Pirithous, who teaches him all about matters of the heart—and body. When they reach the city, Theseus is shocked to discover that his father, the king, has a tradition of sacrificing youths to the Minotaur, the monster that inhabits the island nation of Crete.

Arthur Griffin fell in love with mythology as a six-year-old when his mother, not able to find a sitter, took him with her to her art history class. They were studying Renaissance paintings of Greek and Roman legends, and he learned two very important things that day.

One, that there was a whole new world of thrilling stories and myths for him to explore and be enchanted by.

And two, dude! A lot of people were naked back then!

Since then, he’s always enjoyed the steamier side of stories of the ancient world, and is thrilled to be exploring them in his writing. Sometimes his stories are set in a fictional version of the past, or sometimes the gods of old come knockin' (boots) in the present, but almost always there's some element of mythology visible in his work.

Arthur lives in Los Angeles with his boyfriend, and works as a ghostwriter and screenwriter. When he’s not writing fantastical tales of two (or more) dudes doing the bone dance, he enjoys hiking, karaoke, superhero comics, getting drinks in West Hollywood, going to the beach, going to the gym, going to the movies, and writing non-smutty screenplays. (But for the record, smut is WAY more fun.)