Hello, I’m Teegan Loy, and my fifth novel with Dreamspinner has recently been released. It’s the second book in the Game, Set, and Match Series called Love Simplified. And before you ask, I don’t know if there will be a third book. 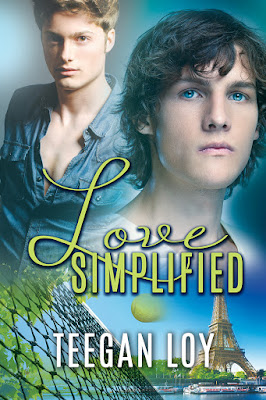 Life is about making choices. For nineteen-year-old Jalen Marten, the choices he makes will not only affect his life, but the life and career of his superstar tennis player boyfriend, Austin Suter. Jalen spends the summer following Austin around the pro tennis circuit playing the supportive friend as Austin adjusts to life on tour.

Keeping secrets from people is hard enough, but when the media, a horde of new fans, and staff and family who all think they know what’s best for Austin are involved, it’s even worse. Coming out to the world is not an option, so Jalen is forced to hide in the shadows. It doesn't always work, and Jalen begins to wonder if they should stay together. The next choice could make or break them as a couple, and both men wonder why love has to be so complicated.


Several people were on the court watering the clay. Arianna explained that before each match, the court was swept, brushed, and watered.
“Imagine the dust if they didn’t do it. Everyone would be covered in red clay, and I look horrible in red.”
I chuckled. “Thanks for making me feel welcome.”
“My son deserves to be happy, and from what I can tell, you are it for him.”
“Uh…” My face felt red-hot, and I buried my nose in my jacket. I was saved from making a fool out of myself when Austin came on the court to warm up. He jogged by us and waved. Arianna waved back, but I ducked down and pretended to tie my shoes.
Just before the start of the match, Will and Kyle slid into the seats behind us. I stiffened, and Arianna nudged me, diverting my attention to the court. She pointed out the good things she’d noticed in Austin’s warm-up and mentioned the extra bounce in his step.
“You put that there,” she said.
“You really need to quit saying stuff like that,” I said. Behind me, Will cracked his knuckles and breathed heavily.
Once the match started, it was easy to forget Will, and even though Austin wasn’t playing on a show court, the seats all filled, and the crowd got into the match. Their enthusiasm infected me. I cheered and clapped after each point. The pure joy on Austin’s face when he won the match was worth the long flight and the shit I was getting from Kyle and Will.
After Austin’s win, he had to meet the media. Arianna and I ducked out quickly to avoid Kyle and Will, but we weren’t fast enough because we spotted them lurking in the shadows. Arianna shot a scowl at them. They withered under her scrutiny and let a crowd of people swallow them.
“Those two are going to drive me crazy. I do not feel like reliving every shot. I want to enjoy Austin’s win, not pick it apart,” she said.
“He won. What’s to pick apart?”
“They can always find something to bitch about,” she said.
The sun shone brightly, and matches were in full swing now. Cheers rose from the different courts, and load roars came from the stadiums as we wandered the grounds again. We checked the board to find out when Austin’s next match was scheduled and overheard several people discussing the new American player. Arianna nudged me every time someone said Austin’s name. She glowed with pride, and it made my stomach flip upside down.
Austin shot me a text when the media had finished with him. We found him by the gate we entered this morning, surrounded by fans and signing autographs. Kyle tapped him on the shoulder and told him it was time to get going. He thanked the fans and flashed them a brilliant smile. The smiled widened when he spotted Arianna and me. He hugged his mom and gave me a fist bump without hitting me in the face. I was getting pretty good at those things.
“Oh my God, you won! Congratulations,” I said when we were safely away from the crowds.
“If you’re impressed with my performance, I did my job,” he said. “Too bad I couldn’t give you credit for the win in my interview.”
“What’s that mean?”

He poked his tongue against the inside of his cheek, and my entire face went up in flames.
“Austin,” I said in a strangled voice.
“We might have to make it a ritual on game day.”
“Oh my God! Stop,” I begged.
“What ritual? If you found something that works you should stick with it,” Will said.
I choked and hightailed it to the car. I wasn’t touching that sentence with a five hundred foot pole.


“Chicken,” Austin shouted after me.

I cannot believe I actually have five books published. It’s thrilling and a bit unbelievable. I’ve always written stuff but never took it seriously. A bazillion years ago, when I was in high school, my friend and I wrote stories about really hot hockey players from our area. Today it would be called Real People Fiction. Jeesh, just thinking about that makes me blush. I can’t believe we did that. We didn’t even change the names of the boys. If that notebook had fallen into the wrong hands, we both would have died of embarrassment and lived out our high school days in our lockers. We did let some people read the stories. I have no idea how we convinced them not to share it with other people.

After high school the only writing I did was research papers and tests. I did take one creative writing class where the professor enjoyed composing poetry about deceased people and how shitty his life was. He made sure we all knew he was published and very accomplished. The class sucked, the professor was a jackass, and I lost interest in writing.

Many years and several odd career choices later, I rediscovered my love for the written word when I stumbled across a folder filled with story ideas. And for whatever reason, I opened a blank word document and started to write. Five published books later, and a few novels that need a little more work, I’m still writing and enjoying it more than ever. My current project is a new hockey series called Beyond the Boards.

When’s she’s not writing Teegan Loy can be found watching hockey, hanging out at the movie theater, or drinking a cup of coffee with friends. She’s also a great taxi driver for her daughter, chauffeuring her to tennis tournaments, fast pitch games, and volleyball matches. Occasionally Teegan attends concerts of her favorite bands. Always on the go, she is able to gather countless ideas for new stories. Life is best lived through experiences.

If you’d like to connect with me and chat about sports or voice your opinion about a third book in the Game, Set, and Match Series, you can find me on Twitter, Facebook, or contact me directly via email.