This is the ninth stop on the Music Clues part of the blog tour. Links to all the stops can be found on my website at the blog tour page.

I’m a huge music fan and when I sat down to write Patience, I’d figured out pretty quickly that Chad was, as well. He absolutely loves 80s music and has a tendency to quote (or, rather, refer to them since I didn’t want to get into copyright trouble) the songs. Twelve of those 80s songs were referenced by Chad throughout Patience.

For twelve of the stops on the tour, there will be a clue (the reference) to one of the songs and an answer with excerpt for one of the other songs. You can see which blogs are participating on the blog tour page above.


For today, the answer song is Boys of Summer by Don Henley.

The clue was: “He didn’t recognize the song—he really was going to have to learn more about ’80s music—but he caught something about deadheads and Cadillacs.” 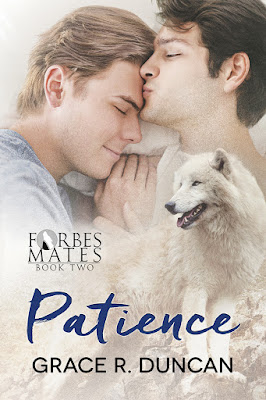 Jamie Ryan was almost ready to accept he’d never find his destined mate. They’re uncommon to begin with and same-sex versions downright rare. Since his gay best friend found a destined mate, Jamie figured he was out of luck. Until end of semester stress forces him to go through the full-moon shift early. Stuck in wolf form, he runs into none other than his destined mate. Who’s human.

Chad Sutton has always had good instincts. They served him well as a detective and continued on when he went private. Those instincts tell him there’s something about the dog that comes up to him while running away from animal control that isn’t quite right. He works to put the pieces together, but is unsuccessful until his dog turns into a human before his eyes.

Jamie has no idea what a shifter’s mate bite will do to a human. He’s terrified to try—and possibly kill his mate. They hunt together for answers while working together on a case for Chad. It’s easy to see they belong together, but Jamie fears the gods gave him someone he can’t keep.


Jamie shuffled through the apartment, following the scent of coffee. Music played quietly from the stereo. He didn’t recognize the song—he really was going to have to learn more about ’80s music—but he caught something about deadheads and Cadillacs. Jamie shook the thought away and continued into the kitchen. He found his mate watching the machine brew, singing along with the music. “Oh gods, it’s already brewing,” he moaned, joining Chad at the counter.

Chad grinned, and turned, tugging him in, wrapping both arms around him. He kissed Jamie on the temple, then cheek. When Jamie turned his head, Chad caught his lips in a longer, more thorough kiss.

Their connection buzzed with happiness. Jamie savored it for several long moments, eyes closed as he rested against Chad. He buried his face in Chad’s neck, inhaling deeply the intoxicating scent. Chad’s fingers in his hair pulled another soft moan from him.

“Maybe I shouldn’t have kept you up so late last night, hmm?” Chad murmured in Jamie’s ear.

“I wasn’t complaining then,” Jamie pointed out. “Though… my ass is a little sore this morning.”

And the next clue is:

“I think it’s more than five hundred miles. Not sure even The Proclaimers would walk across an ocean.”

Each tour stop will have an individual prize as well as an entry into the grand prize. Good luck! And thanks for participating!

Grace Duncan grew up with a wild imagination. She told stories from an early age – many of which got her into trouble. Eventually, she learned to channel that imagination into less troublesome areas, including fanfiction, which is what has led her to writing male/male erotica.

A gypsy in her own right, Grace has lived all over the United States. She has currently set up camp in East Texas with her husband and children – both the human and furry kind.

If you've read the first book in this series, you'll surely remember Jamie Ryan - he who befriended Finley when Tanner couldn't pull his head out of his ass, and was sort of vying to take Tanner's spot in Finley's heart, even though they weren't destined mates.

So, after Tanner and Finley got their HEA, Jamie feels kind of left in the dust and doesn't believe he will ever find his mate.


While in doggie form, and coincidentally trying to run from Animal Control, Jamie happens across Chad Sutton, ex-detective who's now a private investigator. His mate. Tongue lolling, he runs up to Chad and tries to convince his human to save him. Chad's no dummy - while he doesn't know that the dog he names Murray is not quite canine, he senses something and pretends the dog belongs to him.

I really liked how the author created their immediate connection, giving us a great visual of the human Chad interacting with this very smart dog Murray aka Jamie, who seems to understand every word he says. I giggled a lot during this part, especially at Jamie's thoughts.

And Chad has no idea that the smart doggie is actually a man - well, until he finds him naked and peeing one morning in the bathroom.

That scene was just precious.

Their relationship seemed strong from the start, and since Chad is trying to find a man who doesn't want to be found, and Jamie is studying Criminal Justice, the two team up as dog and master as Chad pursues all leads, all the while having wild monkey sex, because mates. Also, knotting. Which requires some explanations from Jamie, of course, but Chad doesn't seem to be fazed by anything he finds out about the dog that wasn't.

There are two actual plots that merge/converge - the plot line about finding Chad's assigned target, and the plot line about Jamie being afraid to deliver the mating bite to a human, because nobody in their pack history has done so, and there's nothing in the archives anywhere in the country that will tell them if Jamie has a chance to succeed.

So, the two embarge on a trip to Italy, where the wolves' most ancient pack lives, to find out more.

I really enjoyed this book very much - from the instalust to instalove, bc we're talking mates here, the knotting, their easy banter, Jamie ribbing Chad about his strong affection for all things 80s, the trip to Italy, finding out that the grand Poobah wolf in the USA isn't as honest as expected (and I sure hope that'll be addressed in a future book), the actual mating (because HEA, y'all), and even the setup for the next book in the series - it was all very well done, and kept me interested from start to finish.

I don't recommend reading this book by itself. With as much screen time as Jamie gets in the first one, it would be better to start there. And you're in luck since both books are now available - read them one after the other for full impact.

Absolutely worth your time. Hot, sexy, fluffy shifter romances are so much fun, right? 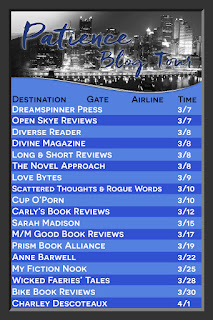 Promotional materials provided by the author.
Posted by Sandra at 3:00 AM