In today's post, we will talk about Prickly Business and Prickly By Nature, plus take a look at a personal story Piper has chosen to share. And of course, all the way down, there'll be another chance to win! 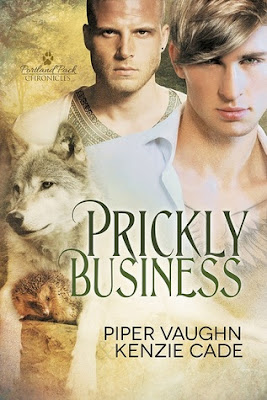 Some people might call Avery Babineaux a prick. He’s a hedgehog shifter from an old-money Louisiana family with a penchant for expensive shoes and a reputation for being a judgmental snob. His attitude is why he and his fated mate are estranged. Not that Avery cares. He doesn’t want to be mated to some blue-collar werewolf anyway. Or so he keeps telling himself.

No werewolf likes to be looked down upon, least of all Dylan Green. He doesn’t need a mate, especially not some snotty hedgehog who sneers at his custom motorcycle shop and calls him a grease monkey. But when Avery gets into trouble with a shady loan shark, Dylan can’t stand by and let him be hurt—whether he wants the brat or not.

Yet once Dylan steps into Avery’s world, he realizes there’s more to Avery than his prickly exterior, and that unexpected vulnerability calls to Dylan’s protective instincts. The sassy little hedgehog needs a keeper, and despite their horrible first impressions, Dylan starts to believe he might be the wolf for the job.

Avery paused at the dryer for a few seconds, then left the restroom with his hands still damp. Distracted by unwanted thoughts, he collided with something hard and unmoving as he exited the hallway that led back to the main bar area. Avery stumbled back and nearly lost his footing, but even as he struggled to stay upright, the familiar scent struck his nose and made his entire body react. His skin heated, pulse quickened, cock filled, and that ache inside him—the one that longed for its mate—returned with a vengeance so strong it robbed him of breath.
Avery gaped as Dylan Green tossed him a glance over his shoulder. The musky scent of this particular wolf burned in his nostrils and made the animal inside him stir. He both loved and loathed it in equal measure. His eyes greedily took in the broad back beneath the lines of Dylan’s leather jacket, the long legs encased in formfitting denim, the strong square jaw. Dylan’s light brown hair was wet from the drizzle outside and shorter than the last time Avery had seen him, but it worked with his high cheekbones and bold features, and his dark stubble emphasized his well-sculpted mouth.
Dylan turned away, dismissing Avery without a word. It was then Avery noticed he had his arm draped over the shoulders of another guy. A human from his scent. A good-looking human who seemed mighty comfortable all snugged up against Dylan’s side, as if it were his right to be there.
Avery fought back a hiss. Fuck that. No one else has the right to—
He cut off that line of thinking. How dumb could he be? It was as though his thoughts in the bathroom had somehow conjured Dylan just to torment him.
Dylan, his destined mate. The wolf who’d rejected him and their potential bond two years ago. The one whom Avery should most assuredly not be staring at or admiring, because there was nothing between them and there never would be.
When it came down to it, Dylan wasn’t even his type. Avery liked slender men with minimal body hair, men who were more his size and height, not big hairy brutes who towered over him and made him feel small. But a part of him, the part he held no sway over, rebelled at the thought of desiring anyone other than Dylan.
Damned pheromones. Damned fate. Why would destiny think they were an ideal couple? The mating pull paired complementary personalities, matching the people who had the best chance of making each other happy for life. It didn’t take into account little things like gender or conflicting shifter species. But it wasn’t infallible. It couldn’t be. A hedgehog mated to a wolf? Plumb ridiculous, as his mama would say.

Second in the series, Prickly By Nature: 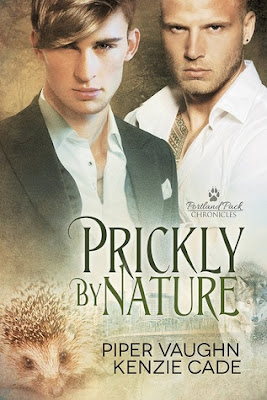 In the four months since hedgehog shifter Avery Babineaux started investigating the disappearance of a young female werewolf from the Portland Pack, he’s discovered his life’s passion. Now he’s apprenticing under established PI Corbin Reid. Avery hopes his training with Reid will help him finally bring Lacey home, but detective work isn’t without its perils, and the potential dangers strain his relationship with his new mate, Dylan.

Dylan Green would be perfectly content with his mating and his motorcycle shop if it wasn’t for his constant worry about Avery’s safety and the fact that Avery’s never home. Proud as he might be of Avery’s determination to prove his worth and fulfill his promise to Lacey’s father, Dylan can’t stand the thought of Avery being hurt. Yet what right does he have to demand Avery give up his job when it’s clear Avery’s found his true purpose? Still, Dylan wishes he could, and the appearance of a new police detective who sets his sights on Avery only adds to the tension.

Something has to give, but stubbornness runs in both their veins, and it might take a catastrophe for them to find a compromise they can live with.

We hope there'll be more from Avery and Dylan soon!! 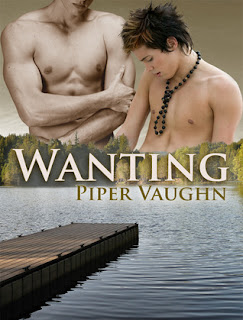 
Hey, everyone. :) My Fiction Nook invited me to share a short personal story. Technically, this could have gone in the “little known facts about me” post, but it’s a bit more detailed than I wanted to go into there.
I love to read the arranged marriage or marriage-of-convenience trope in romance. I have since I first stumbled onto Harlequin category romances as an impressionable eleven-year-old. I didn’t find out until years later, when I was a teenager, that I’m actually the descendent of a real-life marriage-of-convenience. I remember talking to my maternal grandparents at different points during high school. I think a lot of us are probably curious about the older generation in our families. At one point I asked my grandpa if he thought my grandma was beautiful when he married her. He answered, point blank, “No.” I was shocked, and at the time, I couldn’t think of what to say.
Later, speaking to my grandmother, I asked her about how she met my grandpa and if they were in love when they got married. Turned out, in the early 1950s they both worked for a pickle-canning factory, and they got into a pickle fight at one point. My grandmother had recently moved to Chicago from Puerto Rico. She was in her late teens and she came to live with an aunt. She’s what some people would call a “jibara.” She came from in-land, from the mountains. She only had maybe a third-grade education and was pretty much illiterate and barely spoke any English. At that time, for kids from “el campo” (the countryside), school was less important than being around to help their families, especially since families tended to be large and there were a lot of kids that needed tending.
So, my grandma was sent to Chicago to help her aunt, but the lady pretty much ended up using her as slave labor. My grandma was desperate to get out and run her own household. My grandpa wanted a wife to keep his house and have dinner on his table when he got home from work. They both had a need the other fulfilled. So they got married. The years afterward brought infidelity and a couple of kids (one being my mom), but my grandma said she eventually grew to love my grandfather, and they’ve been together for almost sixty years. Apparently something went right along the way, because they’ve always seemed happy to me. But hearing the truth behind their marriage certainly killed any ideas I’d had about their whirlwind romance. It wasn’t a romance so much as a business arrangement. My grandpa wasn’t fond of bachelorhood, and my grandma didn’t mind being forced to keep a house clean and cook the meals if it was in her own house and kitchen.
Life is interesting sometimes. Well, most times. I wonder occasionally what might have happened if they’d both married people they were in love with from the beginning. Would my grandma’s daughter still have married my dad? I guess I might always be curious. I wish there was some way to peek into an alternate universe where it went a different way. But then I wouldn’t be here, and I wouldn’t be me. Maybe in the end it’s all as it was meant to be? And I still want to write that marriage-of-convenience romance.

Piper Vaughn wrote her first love story at eleven and never looked back. Since then, she’s known that writing in some form was exactly what she wanted to do. A reader at the core, Piper loves nothing more than getting lost in a great book—fantasy, young adult, romance, she loves them all (and has a two-thousand-book library to prove it!). She grew up in Chicago, in an ethnically diverse neighborhood, and loves to put faces and characters of every ethnicity in her stories, so her fictional worlds are as colorful as the real one. Above all, she believes that everyone needs a little true love in their life…even if it’s only in a book.


Thanks for celebrating with us. Come back next week for our Grand Finale, where we'll talk about the Lucky Moon series (including excerpts), have a Q&A with Piper, and give you one more chance to win one of her books!