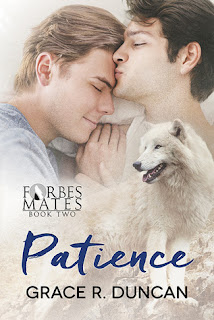 
Jamie Ryan was almost ready to accept he’d never find his destined mate. They’re uncommon to begin with and same-sex versions downright rare. Since his gay best friend found a destined mate, Jamie figured he was out of luck. Until end of semester stress forces him to go through the full-moon shift early. Stuck in wolf form, he runs into none other than his destined mate. Who’s human.

Chad Sutton has always had good instincts. They served him well as a detective and continued on when he went private. Those instincts tell him there’s something about the dog that comes up to him while running away from animal control that isn’t quite right. He works to put the pieces together, but is unsuccessful until his dog turns into a human before his eyes.

Jamie has no idea what a shifter mate bite will do to a human. He’s terrified to try—and possibly kill his mate. They hunt together for answers while working together on a case for Chad. It’s easy to see they belong together, but Jamie fears the gods gave him someone he can’t keep.

This is my new favorite shifter series! SEXY. WOLFY. FLUFF.

It gets Dani's No Angst for Miles guarantee.

Jamie first meets his mate Chad when he's in wolf form. Chad rescues the big white dog from Animal Control, names him Murray, and decides to keep him. But soon enough, Chad realizes that Jamie, err, Murray is not your average dog.

So Chad isn't entirely shocked when he catches Murray peeing in the toilet, nor when Murray turns into a gorgeous blonde man. Who's naked. In Chad's bathroom.

There are two main plot lines here: Chad and Jamie figuring out how their claiming each other will affect Chad (there's surprisingly little info on human mates) and working together to try to find a man who doesn't want to be found.

Chad, as it turns out, is a private investigator, and, as those of you who read the first book will remember, Jamie WANTS to be a detective and is studying criminal justice.


Chad and Jamie are totally made for each other. Jamie teases Chad about his penchant for all things 80s, but, hey, who doesn't love The Breakfast Club?

Of course, because this book is about WOLVES, or a human and a wolf shifter, things heat up fast. It's all insta LUST, followed closely by insta LOVE. But it works. Because MATES.

The steam level, while lower than in the first book, is still high, and the sweetness factor approximates that of a Starbucks Venti Caramel Frappuccino.

The HEA is totes sexy & feel good, and the epilogue sets up book 3 (I do wish there had at least been a mention of Jamie and Chad, seeing's how this is their story and all).

My only complaint is that parts of the books, like the guys' loooong plane and train ride, dragged a bit. It was nice to see Tanner and Finley again though.

I do not recommend reading Patience as a standalone; Jamie plays a significant role in book 1, so you'll be missing a lot if you do.

I was born with a reading list I will never finish.