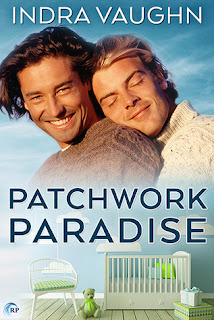 
Oliver and Samuel’s relationship is fairy-tale perfect. They share a gorgeous house in Antwerp, go out with their friends every weekend, and count down the days to their dream wedding. But their happy ending is shattered one late night, and just like that, Ollie is left bereft and alone.

The months that follow are long and dark, but slowly Ollie emerges from his grief. He even braves the waters of online dating, though deep down he doesn’t believe he can find that connection again. He doesn’t think to look for love right in front of him: his bisexual friend Thomas, the gentle giant with a kind heart and sad eyes who’s wanted him all along.

When Thomas suddenly discovers he has a son who needs him, he’s ill prepared. Ollie opens up his house—Sam’s house—and lets them in. Ollie doesn’t know what scares him more: the responsibility of caring for a baby, or the way Thomas is steadily winning his heart. It will take all the courage he has to discover whether or not fairy tales can happen for real.

A word of advice for when reading this book -- bring tissues. Lots of them. And maybe something to cuddle. Patchwork Paradise is angsty, from beginning, to end. It's so real and full of feels.

We meet Oliver and Sam at the beginning of the book and get a glimpse of just how happy and in love they are. When Sam is murdered, during a mugging, the pain that Oliver feels is tangible. A life, so full of promise and love - gone in a blink of an eye. And Oliver grieves, so much.

Thomas has been in love with Oliver since the day they met, but he knew that they weren't meant to be because Oliver and Sam were the real deal. So he played the field and tried to move on, while remaining friends with Oliver, Sam and their friends Cleo and Imran. But when Sam died, Thomas knew he couldn't just step in, so he stayed firmly in the friend zone. Oli never even knowing how Thomas felt.

And just as things finally seem hopeful, Thomas, who is bisexual, finds out he is a father and circumstances dictate that he must step in and care for his child for an indeterminate amount of time.

To say that Patchwork Paradise was a slow burn, would be a bit of an understatement. The first half of the book is spent with Oliver mourning Sam and trying to figure out how to move on. And also dealing with Sam's parents, who, let's just say, aren't on my Christmas card list. He and Thomas don't even hit the point where they are flirting with that slow burn until well after half way through. But, all of it was necessary. Oli needed time to mourn Sam and the timing was just not right for some time. And it just seemed that one thing after another got in their way.

Also, it should be noted that there is, over the course of the book, sex with other people. None of that happened once Oliver and Thomas got together, but it's there and I think it was actually necessary. In Oliver's case, the only person he'd ever been with was Sam, so when he started trying to date, and it took a couple tries, the inevitable happened. And Thomas tried to distance himself and find another path, because he thought Oliver would never see him as anything other than a friend.

But worry not -- Oli and Thomas do find their way and they get the sweetest HEA. It takes them a long time to get there, but things that are worth having are also worth waiting for.

-------------
ARC of Patchwork Paradise generously provided by the publisher, via Netgalley, in exchange for an honest review