ARC Review: Beyond the Sea by Keira Andrews 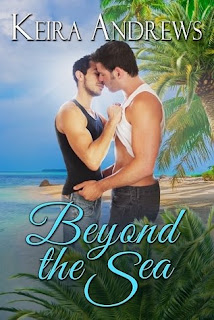 
Even if it means quitting their boy band mid-tour, Troy Tanner isn’t going to watch his little brother snort his future away after addiction destroyed their father. On a private jet taking him home from Australia, he and pilot Brian Sinclair soar above the vast South Pacific. Brian lost his passion for flying—and joy in life—after a traumatic crash, but now he and Troy must fight to survive when a cyclone strikes without warning.

Marooned a thousand miles from civilization, the turquoise water and white sand beach look like paradise. But although they can fish and make fire, the smallest infection or bacteria could be deadly. When the days turn into weeks with no sign of rescue, Troy and Brian grow closer, and friendship deepens into desire.

As they learn sexuality is about more than straight or gay and discover their true selves, the world they've built together is thrown into chaos. If Troy and Brian make it off the island, can their love endure?

Keira Andrews has done it again and delivered a beautiful love story.

The premise pretty much reminded me of the TV show Lost and I was amused when the MC's actually referenced the show.

At the start of Beyond the Sea, Brian is an emotionally closed-off man. He ran to Australia from the US and his old life as a commercial airline pilot when he couldn't handle the guilt of surviving a disaster - one where he, as the Captain, was instrumental in saving the lives of a whole lot of people. Instead of feeling like a hero, though, he only sees his failure to save everyone. Brian lost his love for flying after that and never really got it back. He used to live for it, but now it's just something he is good at. Aeronautics is something he still holds a passion for, but flying is a different story and he refuses to be Captain, again, sticking with the co-pilot spot.

Troy is a pop star who grew up in the limelight. From the time he was a child, his father had mapped out his life down to the smallest detail. Troy always had people around making decisions for him and he pretty much just went with it. It was easier that way. But as he's gotten a bit older (he's 26 at the start of the book), Troy is starting to see that he's not happy following his expected path.

From everything I've read, the music business will suck your soul. Drugs aren't just available, but abundant. And with all the pressure to be what the label is selling, and always being "on" for your fans, drugs become the only escape for many. But Troy isn't going down that road. He watched his father spiral out of control with alcohol, cocaine and heroin and he's not about to do that to himself. Unfortunately, his little brother, Tyson, doesn't have the same dedication, letting fellow band mate Nick draw him into using cocaine and heroin. And Troy has had enough and decides to follow through on his threat of quitting the band if Tyson didn't clean up his act.

Beyond the Sea didn't actually read like other GFY stories I've read. It really felt different. The MC's don't get together just because they are the only ones around. There was no shaming of themselves or the other person. It read more like two men discovering their bisexuality or fluidity, and then exploring that. Did they expect it? No. And I loved it.

There is a very slow build of the feelings that both Troy and Brian develop. They get to know each other, they become friends and learn to trust each other and everything between them is very balanced. They help each other survive and cope. As days turn into weeks, they each talk to the other about painful things that they've never really dealt with. They form a close friendship. And then as their feelings get stronger, they develop a sexual relationship. And I won't lie - the sexytimes are scorching, but they never felt gratuitous or like it was just because there weren't any women around. It felt very natural to me.

Neither man has ever had the opportunity to really consider their sexuality before. Brian was too closed off and Troy was surrounded by too many expectations. And you know what? In the end, it doesn't matter. Beyond the Sea was such a beautiful love story that really illustrates that love is love. Troy and Brian are beautiful together and they're in it for the long haul. Well done, Keira Andrews!

**An ARC copy of Beyond the Sea was generously provided by the publisher in exchange for an honest review.**