Spotlight: Dom On The Side by Kate Aaron

Today we shine the spotlight on Kate Aaron and

Dom On The Side
Blowing It #3 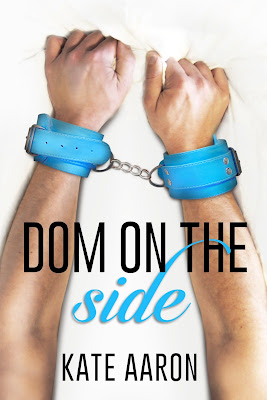 Sameer Farouk is the right guy at the wrong time, and as far as Ryan can tell, not kinky. No matter how clearly Ryan can foresee a future with Sameer, he refuses to settle for less than total compatibility, both in and out of the bedroom. Despite their obvious connection, breaking up is the right thing to do, even if it breaks Ryan's heart.

Torn between them, Ryan must decide if he's prepared to gamble everything on one man, or if he'd be better off with a vanilla boyfriend and a Dom on the side.


My mouth ran dry as the man tied to an X-shaped cross in the centre of the room tested his bonds, the creak of rope audible over the hushed breaths of the gathered crowd. We stood in the shadows, a nameless, faceless audience, watching him struggle. A sheen of sweat glistened over his bare skin. He was pale, his whiteness emphasised by the cold spotlight fixed on him, skewering him as thoroughly as an insect on a slab; a specimen under a microscope. We devoured him with our eyes as he stopped struggling and hung, the rope biting into his arms and legs and torso.

A man broke from the crowd, a peaked leather cap pulled low over his eyes. It was he who, in a series of deft movements, had so thoroughly bound the captive. The smooth red rope had slipped through his fingers like silk, a loop here, a knot there. The bound man’s breaths sped up as the other paced the empty space around him, the ring of open floor into which no spectator dared step. His leather-booted treads were heavy, deliberate, each step measured like the slow beat of a drum. Anticipation ratcheted, and my palms sweated in sympathy with the sweating, shaking man strung on the cross. I wanted to cry out, break the spell, avert my eyes, but all I could do was watch in horrified fascination as Leatherman circled the cross and removed a long, coiled whip from a hook on the back.

One or two men near us shot glares in our direction, silencing the interruption. I wiped my hand on my jeans and took Owen’s, squeezing hard. Yes, I silently answered. I’m pretty sure he is going to.

I flinched at the first crack of the whip; the sharp cry and long groan that followed. A red stripe rose instantly along the captive’s thigh, which I’d barely registered before Leatherman swung his meaty arm in an arc over his head and another crack split the air. Men stirred around me, shifting their weight on the balls of their feet. Some stared with avid, glazed-eyed interest, some looked almost bored. More than a couple moved closer to their neighbours, hands wandering, straining bulges in leather and rubber leaving little to the imagination.

Owen cringed as the pace of whip cracks picked up, striping the man’s thighs with neat red lines, and pressed so hard into my side I could feel every time he flinched in sympathy. When somebody slipped behind us, resting his hands on our shoulders and speaking in an undertone close to our ears, Owen jumped.
“Lars knows what he’s doing,” the man said in impeccable English with that strange lilting cadence of the Dutch. “He and Stefan have been together for years.”

“Why would you stay with someone who does… that?” Owen asked on a shuddering breath.

“He’s still going to be black and blue in the morning.”

Our new friend chuckled. “Yes he is.” He didn’t sound upset about it.

As suddenly as the whipping had started, it stopped. Lars dropped the whip where he stood and crossed to Stefan in quick strides. He cradled his head, kissed his sweating temples, whispered words we couldn’t hear. Stefan’s eyelids fluttered, and the slim muscles in his arms and thighs jumped and twitched of their own volition, but as much as he was able, he leant towards Lars, not away.
Something stirred inside me as I watched them, like my heart was pushing up towards the base of my throat, constricting my lungs. As horrified as I felt I should be, part of me wanted….

Born in Liverpool, Kate Aaron is a bestselling author of the #1 LGBT romances What He Wants, Ace, The Slave, and other works.

Kate swapped the north-west for the midwest in October 2015 and married award winning author AJ Rose. Together they plan to take over the world.