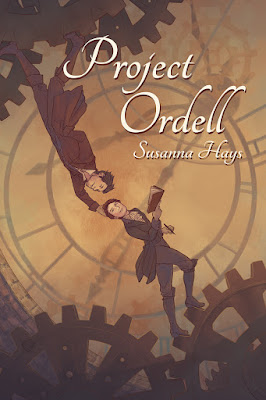 Ordell Rutledge lives in the small town of Blackwick where he helps in his father’s modest automaton shop. While he enjoys interacting with the few people who grace his father’s business, he feels isolated because he can’t relate to them. For ten years, life’s been quaint and peaceful, but Ordell has a secret: he is an automaton, sentient enough to pass as human.

Ordell’s life is upended when the person he trusts most betrays him. Heartbroken, he sets off for Linnesse, a city that accepts automatons as people and is booming with the latest technology. With another sentient automaton, Elias Griffith, at his side, they overcome obstacles and uncover the strange truth behind Ordell’s past. But sometimes the past is best left in the dark.

BLACKWICK WAS a small town where it seemed to only rain. When it wasn’t raining, it was damp and muggy. Still, the town had its charms; if you looked to gothic architecture for inspiration, Blackwick was a veritable gold mine, chock full of gloom. The tall buildings, each adorned in the finest grays or blacks (and nothing else) did little to help the town stand out against the sky, which itself seemed trapped in perpetual silver. It wasn’t a particularly nasty place, mind you—not if you enjoyed the rain.

Ordell did not enjoy the rain.

He crawled out of his small bed and walked over to the window. Another restless night, despite the fact that he should have recharged his energy. The drizzle of rain fell from the cloudy sky and collected alongside the windowsill outside. Mr. Lynch played his accordion down below while the children danced around him. Mrs. Briggs would come out soon after to hit him with her broom and tell him not to play that ruckus so late at night. The two would banter here and there, and then Mr. Lynch would go play his accordion elsewhere.

Then there was the elderly lady who sat in her rocking chair on her front porch and hummed to the music. No use talking to her—she wouldn’t answer, only give a small smile and continue rocking. She rocked from nine in the morning to ten at night. She’d go inside from time to time throughout the day, but she’d always come back—like a moth to a candle.

Rumor had it she waited outside for her son to come back from war. The war that had happened twenty years ago. The same war her son died in.

Of course, that was just a rumor. Perhaps she truly enjoyed watching the people go about their lives, like Ordell did. She also seemed to enjoy watching the children dance around while Mr. Lynch played his music and sang one of his whimsical songs.

The gas streetlamps lit up the dark cobblestone street and the soft wind rustled the hanging clothes that were no doubt still wet from the rain. A white shirt flew off the clothesline and down to the small puddle, which had formed near the shallow stairs that led toward the wealthier part of Blackwick.

The wind blew again, and the shirt rustled near one of the children dancing. The little boy grabbed it and wrapped it around his neck like a cape. He grabbed the little girl’s hand, and they continued to dance in a circle around Mr. Lynch, singing their own little tune.

Ordell wouldn’t change his room for the world. It was a cozy place in the attic above his father’s shop. Resting alongside the stairs going up to the wealthier part of Blackwick, Ordell saw everything.

Even the things the world didn’t want him to see.

He saw Mrs. Combs’s and Mr. Harrison’s illicit affair down near the grocery stand every Friday night at exactly six thirty in the evening—that was around the time Mr. Combs went down to the city to collect supplies for his store. Many of the others knew of the affair, but no one told Mr. Combs of it. Or, if they did, Mr. Combs shrugged it off and carried on with his business.

He saw how Mr. Galloway struggled with money and went through illegal means of obtaining a small profit. Usually he met with a mysterious stranger between Mr. Harrison’s house and the pub, where there was a tiny nook in which no one could find him easily. When the deed was done, he looked over his shoulder twice and then scurried off into the night.

He also watched how his father would mingle with clients who seemed to have other agendas on their mind.

It was something that concerned Ordell very much. Not for his own well-being, but for the well-being of his brothers and sisters, who were not sentient enough to take care of themselves. Who didn’t understand when they would be abused or taken advantage of.

It was Ordell’s responsibility to take care of them, to make sure no one could hurt them. Even his own father.

They were just going to a new home.

That was the only thing his father would tell him when he asked where his brothers and sisters were going.

Later on Ordell pressed the topic further, but his father shut him down each time. He knew what they were used for. Manual labor or jobs the humans didn’t want to do. At least that was what his father told him.

For the most part, he believed it, but there were times he felt there was more going on between his father and his clients.

“Don’t worry, Ordell,” his father would say, “they’re going to a loving home. They have more potential there than they do here.”

His father would then place his large hand on Ordell’s shoulder and give one of his famous crinkled smiles. “Because you are too special to give up.”

It didn’t make much sense to him. His father created him at age twenty-one, which was the typical age for his other siblings. Sure, there were some as young as eighteen and some much older, but it was only when a client specified those requirements.

If he pressed further, his father would say that Ordell was too human. Octavio often joked thatOrdell was more human than most humans, and he was beginning to believe it. Aside from the few kinks here and there that showed he was a machine, Ordell felt more connected to the humans than the automatons. He liked to mimic them and live his life like the other citizens. He would recharge in a bed rather than prop himself up against the wall like he used to. He would socialize and complain about being hungry when, in reality, he didn’t have an appetite. Ordelleven shared his fears of aging, which was something that would not affect him.

It was just those tiny things that made him feel like he belonged in the community.

Ordell pressed his forehead against the windowsill and stared back out at the dark streets. Sometimes the clients would come this late at night when his father thought Ordell had gone to bed. He’d see the strangers walk up to the shop when the closed sign was up for the night. They did a strange knock, and his father would come down and open the door. Ordell would then press his ear to the door and see if he could hear the conversation going on in the shop below.

Usually all he could hear were grumbles and sometimes laughter.

Right then he saw the strange man who lately had been coming to the shop around this time. He was a tall and lanky man who seemed to have light-colored hair, but it was hard to tell with the streetlamps. His suit looked expensive, and Ordell didn’t miss the shiny gold pocket watch he carried.

Octavio Rutledge, finest automaton creator in Blackwick (and the only inventor left), was not exactly the type of man to mingle with the wealthy. As far as Ordell knew, his father didn’t have friends from the upper class. But for some reason, this man was different.

Just like all the other nights, the man first checked his pocket watch, then lifted his cane and knocked on the door three times. Three rapid times. Then he disappeared inside.

Once again Ordell pressed his ear to the door to see if he could hear any of the conversation. Just like all the other times, he only heard the grumbles and laughter.

Ordell could go down and introduce himself. He was allowed to talk to the humans during the daytime, so why couldn’t he talk to the customers who came by during the night? There wouldn’t be any harm in meeting one of his father’s friends, right?

This man wouldn’t know he was an automaton. Not many did.

Unlike his brothers and sisters, Ordell was very humanlike. He felt pain and pleasure. He felt sadness and fear. Understood right from wrong.

Physically he looked nothing like his father. Octavio had created him with fine copper-brown hair and smoky blue eyes. His complexion was fair and soft, whereas his father had a crooked nose and leathery skin from the heat of the shop.

He looked similar to his brothers, with their soft features and full lips. Same slender body and small frame. Yet many of the townspeople never guessed he was an automaton himself. They fully accepted him as Octavio’s son who had just showed up ten years ago… never aging. Never showing physical signs of fatigue or stress.

Ordell stretched and looked up at the small clock. His version of sleep was powering down after running for a few days. He’d been running for five days now without resting, and he could feel himself running slower than usual. Octavio warned Ordell that he shouldn’t push himself that many days, but Ordell couldn’t help it; someone needed to help keep the shop in order when Octavio slept. He contemplated again if he should go down and introduce himself. In the end cowardice won out over curiosity. It was a wasted effort to try to listen in on the conversation below, so Ordell walked back to his bed and pulled the covers over himself.

Susanna Hays has been writing ever since she can remember. She first started out with ghost stories that she would tell to her cousins and best friend. She has always been off in her own little world and spent her time at recess writing stories in her notebook. She is a huge animal lover and adores cats-- especially the big fluffy ones! She loves talking to others and enjoys making friends on Goodreads and reading books.

She loves to create characters who have a story to tell. She creates protagonists who must overcome their weaknesses and find their true selves.