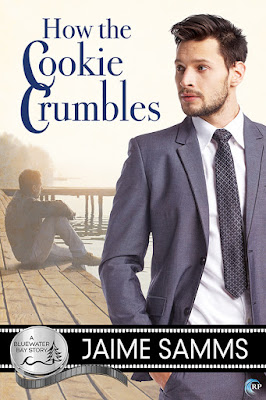 After losing a rigged cooking show competition—and a potential lover—to another baker, Frederic Jackson packs up his considerable baggage and moves to Bluewater Bay. He uses the network’s hush money to buy a new bakery where he hopes the small town’s revitalized economy will let him start anew.

Blaire Caruthers never wanted to work for his father at Caruthers Industries. He should have known that fixing the company’s show results was a mistake, and that choosing another man over kind, generous Frederic was an even bigger one. But the damage is done. To escape the fallout, he’s gone to Bluewater Bay to oversee the company’s interest in Wolf’s Landing merchandise.

Stuck in a small, nowhere town doing a job he hates, Blaire wants nothing more than to prove to Frederic he’s changed. However, Frederic struggles to trust the man who betrayed him once already. As Blaire loses ground with his father, and Frederic starts falling back into self-destructive habits, they both have to find the balance and control that’s been missing from their lives.

Jaime has been writing for various publishers since the fall of 2008, although she's been writing for herself far longer. Often asked, "Why men? What’s so fascinating about writing stories about men falling in love?", she's never come up with a clear answer. Just that these are the stories that she loves to read, so it seemed to make sense if she was going to write, they would also be the stories she wrote.

These days, you can find plenty of free reading on her website. She also writes for Freya’s Bower, Jupiter Gardens, and Total E-Bound, Dreamspinner Press, MLR Press, and Riptide Publishing.

Spare time, when it can be found rolled into a ball at the back of the dryer or cavorting with the dust bunnies in the corners, she's probably spending crocheting, drawing, gardening (weather permitting, of course, since she is Canadian!), or watching movies. She has a day job, as well, which she loves, and two kids, but thankfully, also a wonderful husband who shoulders more than his fair share of household and child-care responsibilities.

She graduated some time ago from college with a fine arts diploma, and a major in textile arts, which basically qualifies her to draw pictures and create things with string and fabric. One always needs an official slip of paper to fall back on after all. . .

Leave a comment for a chance to win $20 in Riptide credit. Entries close at midnight, Eastern time, on February 20, 2016. Contest is NOT restricted to U.S. Entries. Thanks for following the tour, and don’t forget to leave your contact info!