ARC Review: Love and the Exorcism by Melanie Hansen 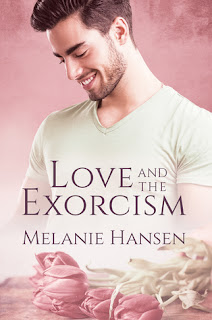 
Tom Hannity is not boring, despite what his ex-boyfriend says. He loves his circle of family and friends and finds peace in the beauty of flower arranging. Still stinging from his recent breakup, Tom attends an Anti-Valentine’s Day “Ex-orcism,” hoping for some fun and forgetfulness.

Mario Tellez is tired of party boys, and he’s had his eye on Tom for a while. When they run into each other at the Ex-orcism, sparks fly, until an accidentally overheard conversation drives Tom to do something he normally doesn't do.

What should have been a hot and fun night turns into Tom and Mario seeing each other at their absolute worst, although surprisingly, it brings out the best in them, too. Navigating around the toxic people in their lives isn’t easy, and after a small series of bumps in the road, they finally come around full circle… to Valentine’s Day and laying old demons to rest.

This is a sweet, lightly steamy, low angst story that begins and ends on Valentine's Day.

Tom, freshly dumped, meets Mario at an "ex"orcism party (purging of all things ex-related). Tom doesn't make a good first impression; he gets drunk and vomits right when Mario's about to kiss him.

Mario takes Tom home, and the two crash in Tom's bed. The next morning, Mario is nearly delirious with fever.

Even though this is a short story (approximately 700 Kindle locations), I felt like I got to know the MCs fairly well. Mario had a difficult childhood with two alcoholic parents, and Tom is a pretty steady guy, content to work in the florist shop he co-owns with his sister.


The story spans a year in three chapters, so we don't see the men interact on page much.

At one point, they stop communicating and grow apart, but Tom is brave enough to do something outrageous to get Mario's attention. Mario is ... shocked, but in a GOOD way. The reconciliation makes for a believable HEA.

I liked this story, but I would have preferred more relationship development in the moment. I'm not a fan of stories where the narrative skips large chunks of time.

Don't expect anything earth shattering, but this is an easy, enjoyable read.