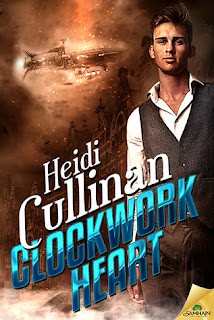 As the French army leader’s bastard son, Cornelius Stevens enjoys a great deal of latitude. But when he saves an enemy soldier using clockwork parts, he’s well aware he risks hanging for treason. That doesn’t worry him half as much, however, as the realization he’s falling for his patient.

Johann Berger never expected to survive his regiment’s suicide attack on Calais, much less wake up with mechanical parts. To avoid discovery, he’s forced to hide in plain sight as Cornelius’s lover—a role Johann finds himself taking to surprisingly well.

When a threat is made on Cornelius’s life, Johann learns the secret of the device implanted in his chest—a mythical weapon both warring countries would kill to obtain. Caught up in a political frenzy, in league with pirates, dodging rogue spies, mobsters and princesses with deadly parasols, Cornelius and Johann have no time to contemplate how they ended up in this mess. All they know is, the only way out is together—or not at all.

Warning: Contains tinkers, excessive clockwork appendages, and a cloud-sweeping tour of Europe. A little absinthe, a little theft, a little exhibitionism. Men who love men, women who love women, and some who aren’t particular.

"Clockwork is so beautifully simple. It's people who are complicated."


A soldier left for dead. A tinker out to save. And spies ... spies everywhere.

Set in an alternate historical universe where Napoleon's army did not lose the Battle of Waterloo and the French empire conquered most of Europe, Clockwork Heart is a fascinating, fast-paced, sexy read with incredibly complex characters and a gripping plot.

Show me what you can do, my monster heart.


Johann has only know war. Abandoned, recaptured by the army he deserted, and left for dead, he wakes to a beautiful man cooing to him in French. Cornelius, who despises war, can't leave Johann to die, but the HEART, the heart is dangerous. The heart is the key to Conny's power-hungry father winning the war against Austria and conquering the continent at last.


Johann, who joined the army at age 14, has never been with anyone, but he wants to be with Conny, please him, devour him.

Cornelius is wicked and loves dirty talk and public sex. He wants to be used and ruined.

"Tug on my hair, push my head in closer. Make me lick you, Johann. Make me taste you."

Sex in this alternate world of 1910 Europe isn't forbidden. It's wild and bawdy; it's absinthe laced with cocaine and kinky parties at an Italian villa. Conny has filthy desires that make Johann at once jealous and insanely turned on.

There are pirates, demented generals, letters written in code, a princess with an electric parasol, political intrigue, kidnapping, a daring rescue, air ships fueled not by oil but by aether, and two men madly in lust and LOVE.


Even if you're not a fan of steampunk or historicals or alternate worlds, read this book.

I am in love with this story. It's brilliant. UNIQUE. Enchanting.

Five stars and then five more.

"Not unless you tell me to," Johann promised.

Good friends, good books and a sleepy conscience: this is the ideal life.