Blogtour: What It Takes by Jude Sierra 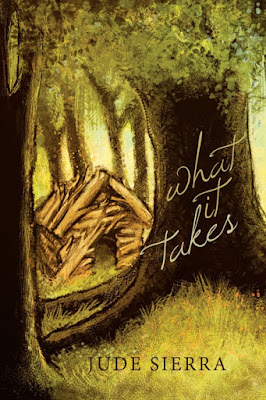 The connection was instantaneous.
Mere moments after Milo Graham's family relocates to Cape Cod, he meets Andrew Witherell—launching a lifelong friendship built on a foundation of deep bonds, secret forts, and plans for the future. When Milo is called home from college to attend his domineering father's funeral, he and Andrew finally act on their mutual attraction. But doubtful of his worth, Milo severs all ties with his childhood friend. Years later, the men find themselves home again, and their long-held feelings will not be denied. But will they have what it takes to find lasting love?

Andrew gladly lets Milo drive his car; he hates driving, especially when he can play radio DJ and watch the scenery go by. He looks at Milo: the way the fading light before dusk changes the tone of his skin; the way the muscles of his arms stand out and his lips curl as he sings along, awfully, to the radio. Milo smiles at him and Andrew flashes a brief one back, wonders how obvious he’s being, and looks back out the window at the slipping sand that spills onto the road and the ramshackle businesses along the road.
“So what got this bee in your bonnet?” he asks suddenly.
Milo shrugs. “You sound like my grandma.”
“Awesome; I like her. Let’s focus.”
“So... okay.” Milo clears his throat and his fingers tighten on the wheel. “I um, think I have something to tell you. But I’m—”
“Is everything okay?” Andrew interrupts, scanning his memory for any signs of additional distress Milo might have displayed in the last few months.
“Yeah. Well. I mean, um… whatever. But I—”
“What? You’re worrying me.”
Milo sighs and pulls into the parking lot of a restaurant with a giant crab on the roof. “I can’t do this and drive.”
“Okay,” Andrew says slowly, then unbuckles his belt and turns to face him. Milo’s face is a little drawn.
“So, I think I might be gay,” Milo blurts. “I mean, I know. I know I am.” There’s a full minute of silence in the car while Andrew tries to work the words out. Static screeches in his ears, fleetingly numbing his reaction. Focus. He has a few seconds to control his face, to tamp down that sprout of irrational hope seeding despite the chaos, and be ultimately supportive.
“Um.” Andrew licks his lips and tries to pull himself together. That seedling wants to grow into something bigger, and he can’t let it. He looks at Milo’s face, which has morphed into something more vulnerable and worried. Hope is a hollow bell in his chest, ringing loud and dissonant; he wants to vibrate out of his skin with the inappropriateness of his own reactions. This is about Milo, not him. “You aren’t worried that I’m mad or something, are you?” he manages to say.

“I don’t know. Um, your face is doing... a thing,” Milo replies.
Reflexively Andrew puts his hands to his cheeks. His fingers are cold. Okay, so he definitely doesn’t have his face under control. “No, I... wasn’t expecting it, that’s all.” Andrew’s brain, sometimes faster than his mouth, is careening backward. “Maybe I should have had a clue.”
“Oh?”
“Well, for starters, you kissed me back.”

We had an opportunity to ask Jude a few questions. Hi Jude, thanks for joining us today!

Favorite thing about building your own world?

Thanks for having me! I think that my favorite thing is building connections between people. I love getting to describe the natural world around them. I love the setting for What it Takes because the Cape is so beautiful and versatile and such a perfect setting for the tones and shifts of Milo and Andrew’s lives and relationships.

What inspired you to write your first book?

National Novel Writing Month! I was just coming out of a really difficult time in my life after my father passed away. I hadn’t written anything in over a year, and one day I decided to re-read The God of Small Things by Arundhati Roy. The prose is so unusually and startling and unique and inspired me to want to pick up word play and story building again.

Do you have a specific writing style?

I’ve been told that my writing style is lyrical and poetic. I do think that my background in poetry writing comes through in my work. I also do a lot of internal character exposition to explore my stories and my character motivations and actions.

Who are some of the authors that influenced you to write?

So many. I have so many beloved authors and books it’s hard to attribute this to even just a few. As I said above, Roy’s book really motivated me to try. Poet Sharon Olds, whose raw honesty inspired a lot of my poetic style and the idea that each character must be approached with respect and honesty. Diana Gabaldon, who writes stunning, complex historical romances I am in awe of. Stephen King – gosh I read a ton of Stephen King as a kid.

What are some jobs you’ve held?

Have any of them impacted your writing? How? I’ve done a lot of administrative work in various fields – real estate, restaurant and insurance. I hated my job at the insurance company so much I actually wrote my first novel there in an attempt to maintain my sanity. I work in a Writing Center now with college students and also help run a community outreach program with sixth graders from all middle schools in the Lansing area. I love that. Idlewild takes place in a restaurant, so it’s helpful that I have that background, although it’s been a very long time so I’m having to dig through memory banks for some of the administrative stuff linked to running a restaurant.