Thank you Sandra and My Fiction Nook for hosting the release day stop of the First Comes Marriage book tour!

For those readers who may not already know, First Comes Marriage is the second book in the brand new Dreamspun Desires line of gay category romances from Dreamspinner Press. Be sure to read to the bottom of the post for an excerpt from the book, as well as the Rafflecopter giveaway. You could win a dozen red roses for your sweetheart or yourself!
For those readers unfamiliar with my books, they usually include a heavy dose of angst or angsty adventure. My contemporary romances are heavily character driven and my fantasy books have lots of threats to life and limb. My characters work hard for their HEA! As a writer, those books are both satisfying and very challenging to write. They tend to take a lot out of me emotionally. In fact, after writing Encore, part of my Blue Notes Series of contemporary, music-themed romances, I took a break and wrote a fantasy story just to clear the cobwebs. Encore, which is based on real people and experiences in my life, has a happy ending, but there’s a lot of pain and angst on the way to the HEA.
So given all that, I guess it’s not surprising that I’d try my hand at writing a fluffier, sweeter, low-angst romance! Those classic romances were (mostly) the only romance books I read as a young and new adult. So when Poppy Dennison, who is Dreamspinner Press’s PR guru, suggested I write just that kind of romance for the new Dreamspun Desires line, I jumped at the chance.
Writing a classic or “category” romance, as they’re sometimes called, wasn’t easy. There’s a rhythm and a recipe to be followed. Sure, the plots aren’t groundbreaking, but it’s a balance of character development and pure romance that makes them work. But writing First Comes Marriage, was totally wonderful and refreshing! I got to indulge the die-hard romantic inside me and I got to have fun playing with my characters.
After writing a string novels dealing with difficult themes, writing a sweet, simple romance was just what the muse doctor ordered! Don’t get me wrong, I still love writing those angsty and sometimes painful stories, but I’ve discovered that the Dreamspun sweetness is just what I need to recharge my muse’s batteries. It’s a bit like the sorbet served at a fancy restaurant between courses that’s meant to cleanse your palate and ready you for the next intense taste experience!
I hope you’ll enjoy the feel-good, romance for romance’s sake, premise of the Dreamspun Desires line, and that the ending of First Comes Marriage will leave you with a big smile on your face. I know I was smiling when I wrote it! I’ll leave you with an excerpt from the book, so you can get a taste of that “sorbet!” 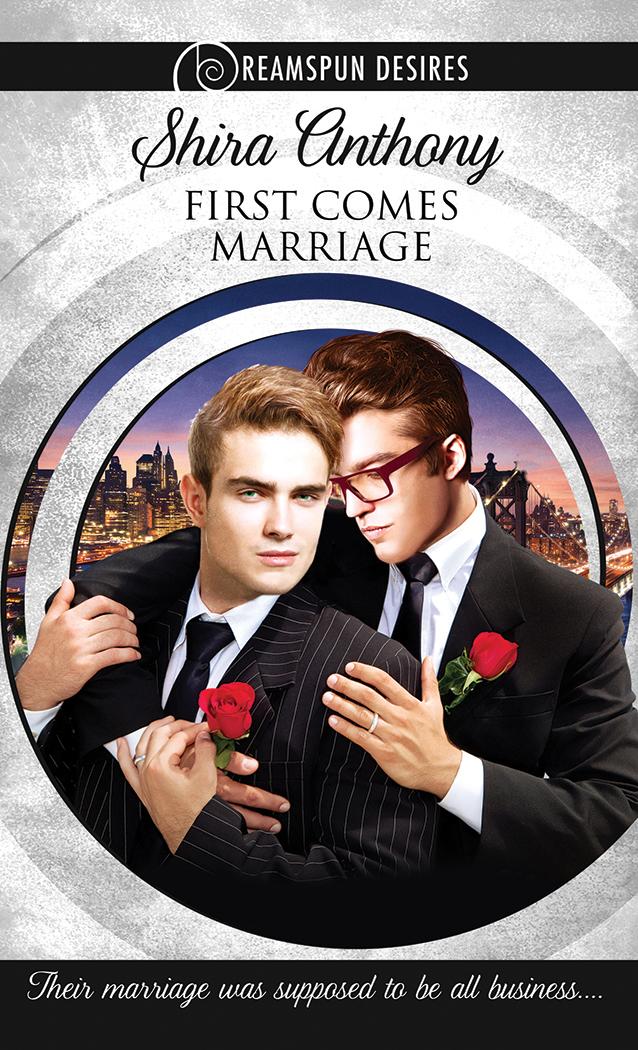 Their marriage was supposed to be all business....

Jesse’s in a pinch. To keep control of his company, he has to marry. So he has valid reasons for offering Chris this business deal: in exchange for living in a gorgeous mansion for a year, playing the doting husband, Chris gets all the writing time he wants and walks away with a million-dollar payoff. Surely Chris can handle that. He can handle living with the most handsome and endearing man he’s ever met, a man he immediately knows he wants in the worst way and can’t have. Or can he?


Excerpt from Chapter Six:
Now, standing in the conference room of Windview Enterprises’ corporate headquarters near South Ferry in Manhattan, one of the matching platinum bands Jesse had bought for them in his pants pocket, Chris wondered if he’d wake up from the dream. The floor-to-ceiling windows looked out over Wall Street and the East River through the forest of high-rise buildings.
“Do you, Jesse Chase Donovan, take Christopher James Valentine to be your husband, in love and in friendship, until you are parted by death?” the judge asked.

“I do.” As Jesse slipped the ring on Chris’s finger, he met Chris’s gaze with such intensity that for an instant, Chris could almost forget the entire ceremony was a ruse to ensure the future of Windview remained firmly in Jesse’s control. Damn the man for being so attractive. Damn him for being a nice guy, because that was the worst part of it. And the part that had you agreeing.
“And do you, Christopher James Valentine, take Jesse Chase Donovan to be your husband, in love and in friendship, until you are parted by death?”
Chris swallowed hard and prayed he didn’t look as incredibly nervous as he felt. “I do.” His hand shook as he took Jesse’s hand and put the ring on his finger.
“Congratulations, Chris and Jesse,” the judge said.
Chris caught Val’s eye for a split second, and he half expected her to urge him to kiss Jesse. But it was Jesse who took charge and blindsided Chris with a kiss.
It started sweetly enough, just Jesse’s lips against his, but instead of releasing Chris, Jesse pulled him tighter against him and pressed his tongue into his mouth. Jesse tasted fucking amazing. Chris didn’t hesitate—their tongues tangled and danced. This close, Jesse smelled good and felt even better. Chris was barely aware of slipping his hands around Jesse’s back before resting them on lean hips. He didn’t think twice as his body and Jesse’s responded in kind.
Someone giggled—Chris recognized Val’s voice—and Jesse pulled abruptly away. Their eyes met for a split second, and Chris thought he saw a mixture of desire and surprise in Jesse’s deep blue eyes. The next thing Chris knew, Val had thrown her arms around him and only his racing heart and tingling lips told him he hadn’t imagined the entire thing.
“Oh, Chris,” Val cooed. “You really did it!”
“Yeah” was the only response Chris could manage. He was still thinking about Jesse’s mouth.
“I guess I was wrong about him being straight,” she whispered mischievously.
Chris was thrilled when Terry grabbed him in a bear hug, because he had no idea how to respond to Val’s comment. He also wasn’t sure if he should be pissed off with Jesse for the show. He supposed if this was going to work, Jesse needed to make the marriage look real. Still, how difficult would it have been to warn Chris that he had that up his sleeve?
~~~~

All about Shira
Shira Anthony is a complete sucker for a happily-ever-after, and rarely reads or writes a story without one. Never a fan of instalove, Shira likes to write stories about real men with real issues making real relationships work. In her last incarnation, Shira was a professional opera singer, performing roles in such operas as “Tosca,” “Pagliacci,” and “La Traviata,” among others. Her Blue Notes Series is loosely based upon her own experiences as a professional musician.Shira is married with two children and two insane dogs and when she’s not writing, she is usually in a courtroom trying to make the world safer for children. When she’s not working, she can be found aboard a 36’ catamaran at the Carolina coast with her favorite sexy captain at the wheel. She’s given up TV for evenings spent with her laptop, and she never goes anywhere without a pile of unread M/M romance on her Kindle.Interested in hearing Shira sing? Here's a link to a live performance of Shira singing an aria from Puccini's "Tosca": http://www.shiraanthony.com/wp-conten...You can subscribe to Shira's monthly newsletter for updates, free fiction, and subscriber-only contests here: http://www.shiraanthony.com/newsletter/
~~~~
Where you can find Shira


Giveaway:
First Comes Marriage is all above love and romance, and Shira’s grand prize is a dozen red roses for your sweetheart (or whoever you think deserves it!). First prize is a $10 Dreamspinner Gift Certificate.
a Rafflecopter giveaway 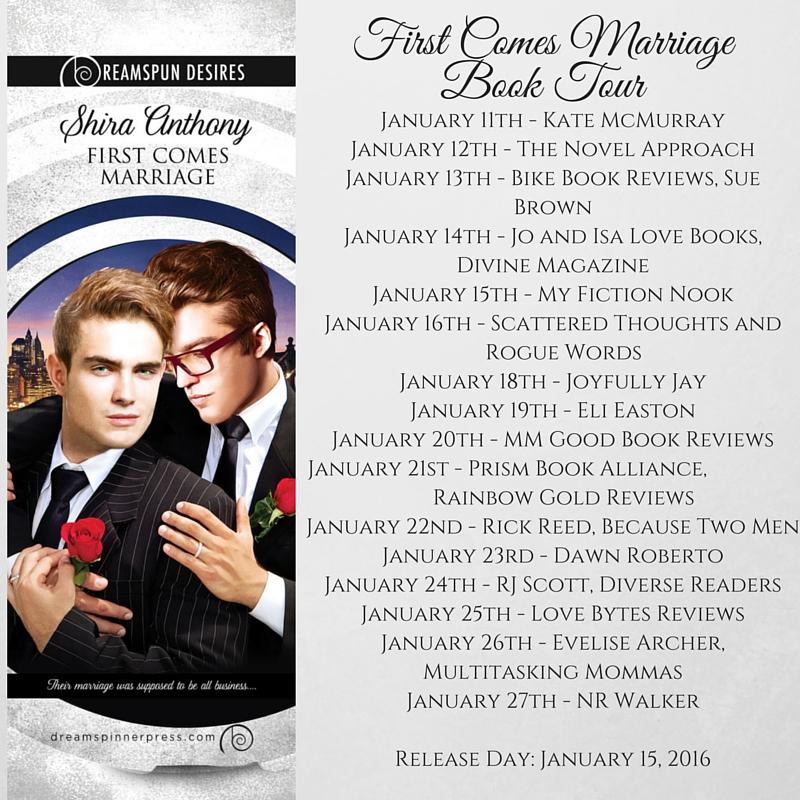