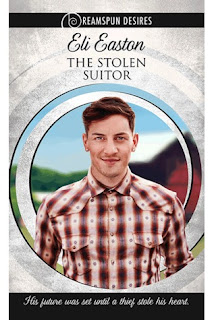 All of Clyde’s Corner, Montana, knows local dandy Chris Ramsey will marry Trix Stubben, young widow and heir to the richest ranch in the area. But one woman isn’t too keen on the idea. Mabe Crassen wants to get her hands on that ranch, so she sets her older son to court Trix, and her younger son, Jeremy, to distract Chris and lure him astray.

Jeremy Crassen thinks his mother’s scheme is crazy. But he wants desperately to go off to college, which Mabe will agree to—if he seduces Chris. How will shy, virginal, secretly gay Jeremy attract Chris, who seems determined to do the right thing and marry Trix? Jeremy can’t compete with a rich female widow. Or can he?

The third offering in DSP's new Harlequin-like series, The Stolen Suitor, takes us to Montana and pits young Jeremy Crassen, gay and virginal, against Chris Ramsey, gay and in the closet, whose daddy owns the local mercantile store.

Chris is expecting to marry his best friend's widow, Trix Stubben, because he wants to do right by his friend, and because he doesn't really want to be gay. Jeremy's mama wants her older boy Eric to marry the widow, which means that Jeremy has to woo Chris away from her.

I didn't quite get why Jeremy just agreed with his mama's scheming, but his characterization as a dreamer, as an aspiring writer (which he keeps secret), was sufficient to make me believe that he didn't have much of a backbone when it came to his mother, and he just went with her demands.

What I also didn't like so much in this book is that the developing relationship between Eric and Trix took up so much page time. I mean, I was reading an M/M romance novel, and I didn't expect there to be so much M/F on page. While Eric cleaned up his act and tried hard work for a change, I didn't like him much in the beginning, though he grew on me as things moved along, and his courageous act toward the end clinched his character for me.

The book jumps around quite a bit, as the narration takes us from Jeremy's mind to Chris', to Eric's and to Trix's, plus Mabe and her one-time paramour, which wasn't a deterrent, but not what I'm used to anymore. I found Jeremy's attempts at enticing Chris amusing, and Chris' attempts at resisting were humorous too. Unfortunately, they didn't get enough page time for me to really believe their romance, and with all these POVs being used, none of them allowed for sufficient character development to make them believable.

While the blurb hints at a super sekrit scheme Jeremy and Eric's mother hatches, it seemed not important during most of the book, as not much mention is made of it after it's initially hatched. While the scheme is the catalyst for Jeremy's pursuit of Chris, it doesn't get much page time until it's used again to cause additional drama.

The climatic and very dramatic scenes at the river surely helped them all along, but it was all tied up too neatly for my taste, what with Mabe and Mr. Stubben Sr., and Eric and Trix, and Jeremy and Chris all getting what they want.

Unfortunately, I wasn't able to really connect with any of them to the point where I cared.

Eli Easton's books (the ones I've read) have good flow and excellent writing skills setting the scenes, and in that, this book was no different. And overall, this book meets the requirements of this series as slightly OTT (read: unrealistic) and giving a feeling of an old-fashioned Harlequin novel.

As with all of these books, the heat factor is low as expected, though we do get a lot of UST. Again, this fits the Harlequin feel of what this series is trying to accomplish. And there is no cheating here - Chris and Trix do not have a committed or physical relationship. Theirs is more of a friendship, a relationship to comfort after the loss of her husband.