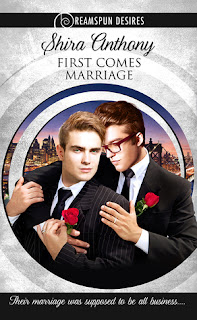 Their marriage was supposed to be all business....

Jesse’s in a pinch: to keep control of his company, he has to marry. So he has valid reasons for offering Chris this business deal. In exchange for living in a gorgeous mansion for a year, playing the doting husband, Chris gets all the writing time he wants and walks away with a million dollar payoff. Surely Chris can handle that. He can handle living with the most handsome and endearing man he’s ever met, a man he immediately knows he wants in the worst way and can’t have. Or can he?

Thank you, Shira, for sending me this book to read!

Chris Valentine is a struggling novelist, when he meets Jesse Donovan during a book reading, who offers him a deal. Under his grandfather's will, Jesse has to marry to keep control of his companies, otherwise half will go to this step-grandmother, whom he hates. Jesse grew up with his grandfather, after his parents died.

Chris is a bit taken aback by the proposal, being set against marriage, but hot-as-sin Jesse woes him with dinner and gifts, and Chris reluctantly agrees to a contract - be married for a year, live with Jesse in his mansion, and get paid a cool mill for his troubles once the year is up. And while living there, he has all the time to write his next masterpiece novel. Not a bad deal for faking it, am I right?

Except, Jesse is straight. Or is he? The kiss he plants on Chris indicates otherwise...

Of course, it's not smooth sailing until their happy ending, what with Wanda (the rather young step-grandma) not buying the veracity of the marriage, and Jesse disappearing off to work and leaving Chris to fend for himself. Wanda doesn't seem as terrible to Chris as Jesse made her out to be, and Chris and Jesse need to work through some issues to get to where they need to be.

Like the M/F Harlequin novels after which this hot new series from Dreamspinner is vaguely modeled, the book is all slow, slow burn, with the two men secretly pining for each other, but not knowing how to ask for what they didn't even know they needed. The two sex scenes are super hot and quite satisfying, for the men and this reader, haha, but they don't come until toward the end, so be prepared to wait. It's worth the wait, though. Just sayin'.

I have high hopes for this series of unconnected novels, and am looking forward to the next ones. By the way, you can subscribe to these via the Dreamspinner website, and get them sent to you each month, just like the Harlequin novels they emulate.

Perfect writing for what this book tried to do, with high emotions and some plot twist, this was fabulous!