Book Review: By His Rules by J.A. Rock

Keaton’s looking for something he can’t find in any dungeon: A domestic discipline relationship, in which he can provide his partner with guidance, support, and loving discipline. When Keaton takes Aiden in after Aiden’s traumatic encounter with Scott, he vows not to pursue any sort of relationship with the troubled sub. But as Aiden struggles to overcome the damage Scott has done and get his life back on track, Keaton’s rules might be just what he needs. 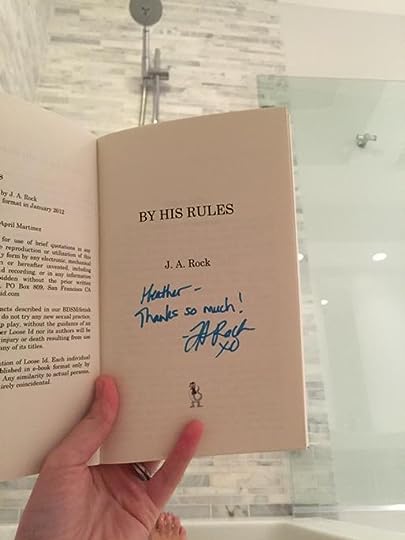 Ahhh, reading in the bath. *bliss*

If you analyze it further, all of my kinks are in the power control category. I just like it when someone has control over else that has nothing to do with pain or restraints. With domestic disciple, the idea that someone else is in charge and is keeping you in line feels just so... freeing, in a way. Now, in real life I don't think I could handle that, but I TOTALLY get the desire and it is very easy for me to get into a DD character's headspace.

I found both main characters to be really, really interesting. The beginning was a little hard to read. Anyone could recognize the signs of an abusive relationship between Scott and Aiden, but I liked how the author made it a slow progression, like a real abusive relationship, so that we saw why Aiden was sucked in. I wanted to save him soooo badly, but it set the stage nicely for Aiden and Keaton's relationship. Keaton was a great guy. He was patient, loving, and gentle, and he took his role as a partner and DD top very seriously. I liked how he let things sort of evolve between him and Aiden and didn't push him too quickly.

I did have some minor complaints. For one, Aiden was almost unbearably bratty at times, and I thought that he acted too immature at certain parts of the story. Also, I didn't get the weird personality shifts in Scott. I didn't find him acceptable in any way, and I wasn't sure if the author was trying to set up a future book with him as the MC so she decided redeem him a bit. It was odd.

Overall, this book is a very quick, lovely read about the journey to a DD relationship. All DD fans should try this one.


Thanks for stopping by!!