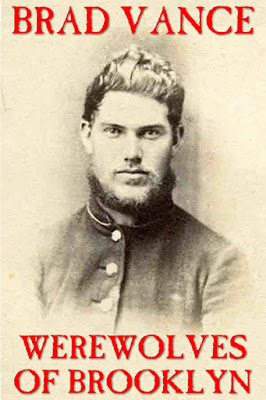 Darien Mackey wasn’t looking for an adventure. For ten years, he’d been happy living in Brooklyn, working as a butcher in the same job, living in the same apartment, dating some “nothing-special” guys. Until one night his buddy Jacob talked him into taking ayahuasca, the soul-changing drug. And Darien had a vision…of a wolf, its all-too-human eyes on him, its paws on his chest, its enquiring mind in his own…

Darien Mackey is changing. He’s more confident, more assertive, hungrier, hornier. And his world is changing around him – his job, his home, his beloved Mechanic’s Library all falling victim to the predations of unscrupulous developers, bent on demolishing the old Brooklyn he loves and replacing it with a forest of condos. But he’s no longer a passive observer of his own life, and as this thing, this power, grows inside of him, he resolves to fight back, to preserve the way of life he loves.

And he’s not alone in the fight. The Lipsius Preservation Society of Brooklyn stands ready to assist in the battle, even though it seems like a bit of a joke to Darien, with its King and its Duke, Marquess, Earl and Viscount.

But there’s nothing funny about his growing attraction to Albeus Finley, King of this mysterious Court. And when slumlords and condo-mongers start to die mysterious, violent deaths at the hands of savage animals, Darien begins to realize that something is afoot in Brooklyn – something supernatural.

And it’s afoot in him, too…

The wolf’s eyes were lava-yellow with hate. His growl and his snarl were meant to terrify Darien, to freeze him in his tracks, prepare him for his death.

Then something rose up in Darien, rage, frustration, primal energy. And his own lips curled, his own growl met the enemy’s.

The Duke retreated a pace, taken aback. Darien felt sharp pains in his palms and looked down. Where he’d had fingernails, he had claws, long and sharp, and the fists he was making were digging them into his flesh.

He smiled, exhilarated, wild. He lunged and snapped at his enemy, knowing that his canines had become…literally that, elongated spikes ready to tear out a neck.

Darien’s ears were ringing, something surging in him beyond mortal feeling – like testosterone but stronger, more powerful, the smell of victory, immortality.

He knew he’d taken a step from which there was no turning back. He was the King’s man, the King’s consort. He would open to Albeus and take him, and be taken by him, and he would be alone no more.

He was one of the pack.


And it curdled the blood of men for miles around when he raised his face to the full moon, and howled.

We had a chance to ask Brad some questions...


Hi Brad, thank you for agreeing to this interview.


I’d say the “easiest” part is the part that’s the most fun, which is plotting the story, writing the story, really getting into the flow of what you’re doing, feeling the creative juices running nonstop. The hardest part is worrying about sales after it’s published, but when you’re writing and it’s going really well, you can forget about that part.

Honestly, I’d be a terrible collaborator. I have my writing style, my ideas, my process, my timeline. I’m definitely a “confirmed bachelor” in the collaboration department.

Somehow I got to looking at “hot vintage men,” pictures from the 19th century or early 20th of guys who were so handsome you couldn’t believe it. Most men back then just weren’t that good looking, usually from either poor nutrition or excessive alcohol consumption or they were so Puritan and uptight they probably never pooped. And I was just fascinated with men who looked…modern. And when I found that picture on the cover of Werewolves, it just grabbed me. He was an unnamed Union soldier from upstate New York, in a picture probably taken before he went off to war. Having your picture taken back then was an expensive proposition, and many soldiers had it done before going off to war so that their loved ones would have that picture if they died. It was a very serious formal occasion that required you to sit perfectly still for a while for the image to take, and that’s why most people have this blank stare on their faces in the old pix.


But this guy…he was this brassy dude with bright eyes and a smirk and he looked…like he was taking a selfie from yesterday. He was so handsome and alive and I just knew, that was Albeus. And seeing that pic is what determined some of the course of the novel; I ended up with the whole Civil War backstory because of that picture.


And, I wanted to do something different with a cover. I may have killed myself financially, because conventional wisdom says, “this is what a werewolf book cover looks like and if yours doesn’t, people won’t click it and it won’t sell.” Which is true, it’s not selling that great, but I had to have it – I had to have him, he is King Albeus.

It could be! There are other court members, there’s more to tell about Albeus and Daniel, and I’ve only tapped the smallest vein of New York City history for this book. When your characters are 100+ years old, that opens all kinds of times in history you can visit. Alas, I’m a commercial artist, and the book has to sell well enough to justify sequels, so, fingers crossed…

Brad Vance writes gay romance, erotica and paranormal stories and novels, including the breakout hits "A Little Too Broken" and "Given the Circumstances."