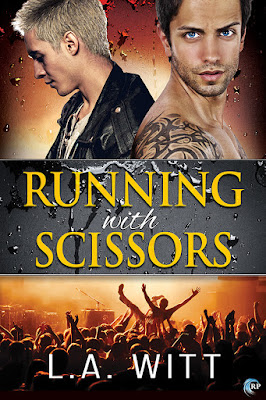 Eighteen months ago, drummer Jude Colburn made the biggest mistake of his life when he walked away from his band just as they were on the brink of success. Now, he’s got a second chance. The band’s bassist just quit, and Jude plays bass almost as well as he plays drums. The other band members aren’t thrilled, but they are desperate.

Running with Scissors needs him, but there’s one condition: no hooking up with bandmates. That’s what ruined things eighteen months ago, after all. Jude’s on board, but no one warned him about the drummer who replaced him. A.J. Palmer is shy and unassuming . . . until he hits the stage. He gets Jude’s attention from the first beat, and suddenly that “no hookups” rule isn’t so easy to follow.

Keeping secrets on a tour bus isn’t easy either, and it’s only a matter of time before the band catches on. When everything hits the fan, Jude has to choose: a second chance at the career he’s always regretted leaving, or a shot at the man of his dreams?

L.A. Witt is an abnormal M/M romance writer who has finally been released from the purgatorial corn maze of Omaha, Nebraska, and now spends her time on the southwestern coast of Spain. In between wondering how she didn't lose her mind in Omaha, she explores the country with her husband, several clairvoyant hamsters, and an ever-growing herd of rabid plot bunnies. She also has substantially more time on her hands these days, as she has recruited a small army of mercenaries to search South America for her nemesis, romance author Lauren Gallagher, but don't tell Lauren. And definitely don't tell Lori A. Witt or Ann Gallagher. Neither of those twits can keep their mouths shut...

L.A.’s backlist is available on her website, and updates (as well as random thoughts and the odd snarky comment) can be found on her blog or on Twitter.

Every comment on this blog tour enters you in a drawing for a choice of two eBooks off my backlist (excluding Running With Scissors) and a $10 Riptide Publishing store credit. Entries close at midnight, Eastern time, on September 5th. Contest is NOT restricted to U.S. entries. Don't forget to leave your email so we can contact you if you win!