Blogtour: Just The Way You Are by EE Montgomery

Just The Way You Are 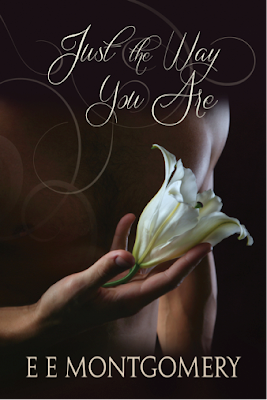 After ten years in an abusive relationship and a near-fatal knife wound, Jonathan Watson is finally free. Unused to being able to make even the smallest decision and smothered by family and well-meaning neighbors, he’s floundering in the real world. Jonathan is afraid of falling into another relationship too quickly and realizes he needs time to rediscover who he is before he attaches himself to another man.

He never counted on meeting Ben Urquhart, though. Ben tempts Jonathan to forget everything and take a leap. For Ben, it's love at first sight, and he doesn't want to take it slow. He wants to build a life with Jonathan, free from harm and full of laughter. But before they can take the next step, they must protect Jonathan from his possessive, threatening ex. Jonathan must find the courage to confront him and break the chains of his past before he can be truly free to build a future with Ben.

JONATHAN SHIVERED in the early morning air but not from the chill. He wrapped his arms around himself and groaned as his wound tugged against the movement. He relaxed slowly as the pain eased. From where he stood, he could see between the two apartment blocks to where the sun glinted off the Brisbane River. Five years ago he used to watch the ferries puddle their way up and down the river, dropping passengers here at Hamilton and across the way at Bulimba. He’d missed that view for a long time. He wondered if he’d miss the house now that he was leaving it.

The house was gray—morning gray, Anthony had called it, but it had always looked like unwashed, neglected underwear to him. The lines of the house were precise and symmetrical, unlike the yard. The front lawn bore scars, just like his chest. They were from his Cruiser skidding to a stop the night Anthony had sent him to kill Mark. His eyes burned as he thought how close he’d come to doing what his boyfriend told him to.

At the time, he didn’t think he had any other choice. It was kill or be killed. Literally. By the end of that night, Mark had been the only one left uninjured. Liam’s leg had thankfully healed quickly where Anthony had stabbed him. Anthony was still in hospital with a self-inflicted knife wound to the stomach, and Jonathan… Jonathan was done with that life. Anthony’s knife in his chest—so close to his heart it was clearly intended to be fatal—had cured him of whatever delusions he’d held onto that let him believe he was in love with the man. Even Anthony’s assertions that Jonathan was responsible for him being in a wheelchair since the car accident two years before wouldn’t get him to stay.

He was out of it now, or at least he would be as soon as the removalists came and took his stuff away. Then he could begin to heal. The first step had been to learn to breathe again after his lung collapsed when Anthony stabbed him. The next step… he didn’t know what the next step after this was. He wasn’t going to admit it to anyone, but he was just as terrified now, starting a life of his own—on his own—as he was when he thought he was going to die.

The trembling began again. Dizzy. Couldn’t catch his breath. He leaned beside the front door and forced himself to bring his mind back to the here and now and looked around again. There was a new section of fence now, and the Cruiser had been repaired and sat at the curb, waiting for him. His cousin must have had the damage repaired while Jonathan was in the hospital—learning how to make his lung work again after his boyfriend had tried to kill him. He shook the thoughts from his head. He had to stop thinking like this or he’d go mad.

Sleep last night had been impossible. The house had been cleaned, but nothing was going to completely remove the blood splattered on the white carpet. His blood.

A low rumble burbled through the air, and a truck turned onto the street. Jonathan’s heart raced. “You can do this,” he whispered, although he wasn’t quite sure which part of “this” he was talking about. It could be dealing with strangers on his own, or it could be leaving Anthony—finally. He pressed the heel of his hand over the dressing on his chest. Staying with Anthony was no longer an option.

The truck stopped and turned to reverse into the driveway. The high-pitched beeping made Jonathan jump and, to calm himself, he focused on the two men sitting in the cab. The driver looked young and blond, the passenger older and shriveled, his hair sticking out in unkempt tangles.

“Two people. Not Anthony. You’re outside, everything’s marked. You don’t need to go inside with them at all if you don’t want to. You can do this.” He counted his breaths in and out. The beeping stopped, the engine cut out, and the driver’s door opened. Long, well-formed legs slipped from the cab, by-passing the step completely as a muscled body slid to the ground. Khaki cargo shorts bunched enticingly around a spectacular package before settling loosely around slim hips as the man’s boot-clad feet landed on the ground and he stood away from the truck. Jonathan moved his gaze up the body. The worn T-shirt did nothing to hide the trim stomach and prominent pecs and the sleeves framed the rounded deltoids perfectly. Jonathan sighed as he lifted his focus higher to see the man’s wide smile.

Hi EE, thank you for agreeing to this interview. Tell us a little about yourself, your background, and your current book.


I’m very lazy. I also like to achieve things. It took me some time but I finally worked out that those two things aren’t mutually exclusive. I just have to work out the easy way of doing things for the best results. Organisation is the key. When I focus, I’m completely focused, so I try to achieve as much as I can during that time, because as soon as I stop, I stop completely and become distracted by anything that floats by. I’m currently trying to bring a little more organization into my writing because I think it’ll speed the process, but I have to be careful not to organize myself out of the chase. I write because I have to find out what happens. If I plot too carefully, I know how the story is going to end and I lose interest in it.

Part of liking to achieve things goes hand-in-hand with my constant need to know. That means I keep going back to school. I have four degrees—two undergrad and two post-grad—and I have numerous certificates that qualify me for various things (business administration, picture framing, therapeutic massage, plus others). I also take on part time jobs (on top of my usual full-time job) that will teach me something different. I did that several years ago when I wanted to learn about the jewellery industry and how jewellery was made. I ended up staying in that job for seven years.

It might sound cold, but I’ve used the same system when dating. I’ve dated people to learn about golf, sprinting, wine, theatrical performance, tax laws, and costuming among other things. My current partnership began because I wanted to learn about ballroom dancing. This one has stuck.

Writing is another way of fulfilling my need to know. When I get an idea, I have to find out what happens.

Just the Way You Are is the fourth book in the Just Life series. When I started the series, I had no idea I was writing more than a short story with an unhappy ending, but every time I got to know the characters, and met a few more, I wanted to know their stories too. This last book is Jonathan’s story.

Jonathan has lived with Anthony for ten years. Anthony is selfish, dishonest and abusive and Jonathan hasn’t been happy for a long time. He stays because he feels responsible for Anthony being in a wheelchair, and he can’t see any alternative. At the end of the third book, Just in Time, Anthony attempts to kill Jonathan and then himself. It takes that violence for Jonathan to understand he has to make a different choice with his life, or die. The opening scene of Just the Way You Are is of Jonathan, only just out of hospital, moving out of the house he shared with Anthony. This is his journey from downtrodden, frightened abuse victim, to the man he once thought he could be.

Tell us your writing goals for this year.

Each January one of my critique groups takes the time to formulate goals for the     coming year. Before we do that, we check last year’s goals and give ourselves a
rating based on achievement of goals. We so gentle with it all, we even allow half
marks.

My writing goals for this year:

E E Montgomery wants the world to be a better place, with equality and acceptance for all. Her philosophy is: We can’t change the world but we can change our small part of it and, in that way, influence the whole. Writing stories that show people finding their own ‘better place’ is part of E E Montgomery’s own small contribution.

Thankfully, there’s never a shortage of inspiration for stories that show people growing in their acceptance and love of themselves and others. A dedicated people-watcher, E E finds stories everywhere. In a cafe, a cemetery, a book on space exploration or on the news, there’ll be a story of personal growth, love, and unconditional acceptance there somewhere.