Hi, and welcome to the Bane blog tour!

I don’t think it’s any secret that a lot of readers, in the wake of reading Strain, wanted more of Darius and Rhys. Already by that point I was brainstorming the pre- and peri-apocalyptic story that would become Juggernaut, but the further along I got on that, the more I realized the situation Zach and Nico were in couldn’t be resolved in the timeframe of Juggernaut. They needed developments that would only make sense to happen after the events of Strain. The plot also required Rhys to have matured a great deal since the end of Strain. Altogether, it gave me a beautiful opportunity to bring closure and an HEA ending (or at least as close to one as you get at the end of the world) for both sets of protagonists.

Thus we have Bane.

Over the course of the Bane blog tour, I’ll be sharing a free post-Bane short story, Refuge. How far post-Bane? Well, you’ll have to read and see. Some developments that happen in Bane are referenced, but not in any great detail, which means the reader should only encounter a few very broad, non-specific spoilers. Obviously, though, it will be best enjoyed if you’ve read Bane already (and Bane, of course, is best enjoyed after Juggernaut and Strain.)

Refuge introduces us to three new characters, Kal, Billie, and perhaps my favorite, Zeus. It’s a completely sex-free story, so you’re safe reading it at work. If my nebulous thoughts on how to continue the Strain universe ever take shape, it’s very possible a lot of material in this short story will be folded into a larger plot with Kal and Billie as the protagonists, and if that happens, you’ll find the smut there.

Each day, at least one stop on the blog tour will contain a section of the story. These segments may end or begin a little abruptly or clumsily at times, as I tried to split them in such a way that no one section would be to long and cumbersome for a single stop on the blog tour. In its linear form, it would simply be a five chapter story. By the end of the tour, all the sections will have been posted. If you need to catch up, you can check out the blog tour page (linked above), or my website, or the “Extras” tab on the Bane product page at Riptide for sequential links to all the posts.

Anyone who follows along on the tour will qualify to win store credit at Riptide. To enter the drawing, leave a comment on this post including a way to contact you (email, Twitter, or Facebook.) Each stop along the blog tour that you visit offers you another chance to enter. Be sure to check the Riptide blog tour schedule for a complete list of other stops. The contest will close 9/26/15. Any entries made without a way to contact the winner will be invalidated, so please don’t forget to provide your email, or your Twitter or Facebook address.

*Author’s Note: Refuge is completely unedited and un-proofed. What you’re seeing here is essentially a first draft, and like any first draft, it often may be clumsy to read or contain extraneous world-building and info-dumping that would be trimmed and streamlined during the editing process. Actually, I kind of like sharing it with you this way, if for no other reason than to allow readers to see just how much world-building happens behind the scenes and in my head, but doesn’t ever actually make it onto the page.

And of course, there will be typos. Oh so many typos. 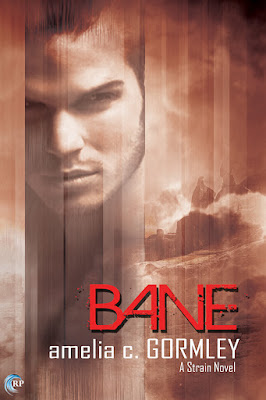 
Rhys Cooper’s unique immunity to all three strains of the virus that nearly annihilated humanity has brought him the unwanted attention of Clean Zone scientists. They’ve summoned him for testing—ostensibly in the hopes of finding a vaccine—but Rhys’s partner, Darius Murrell, has good reason not to trust any government. He and his comrades in Delta Company were unwitting test subjects for Project Juggernaut, the military experiment that gave them superhuman abilities and unleashed the pandemic. Doubting the government’s intentions, Delta Company refuses to let Rhys go alone.

Fear of infection has kept Zach Houtman and his lover Nico Fernández apart for a decade. They meet rarely, just long enough to coordinate their spying on the head of the government’s virus research division. Secretary Littlewood is a vicious predator, and they suspect he’s trying to acquire the strain of the virus that would make him superhuman. To stop him, they need the perfect bait: Rhys.

For Rhys, helping them might cost him his relationship with Darius—or his life. For Zach and Nico, even if their plan succeeds, they still face the ultimate question: can infected and uninfected people ever live together safely?

The chill of the night seeped into the derelict bungalow, forcing Billie to huddle deeper into her tattered jacket and threadbare blanket. Once the structure had probably been sound, but almost thirty-five years had passed since the pandemic and it wasn’t wise to trust most architecture. Even if it didn’t collapse on her brutally-shorn head, it was drafty as hell and there was no telling what sort of vermin lurked in the corners and under the moldering furniture.
She hadn’t dared light a fire indoors, thought, and there was absolutely no question of sleeping outdoors.

“C-couldn’t choose spring to run away, could you?” she scolded herself. “You had to wait for harvest season with winter right around the damn corner.”
It had made sense at the time. Anyone who wanted to leave the Clean Zone was permitted to do so, but they weren’t allowed to take any Clean Zone resources with them. No food, and only one change of clothing. Which meant if she left, she had to do it undetected. And harvest had been decent this year, her parents pantry full of rations she could stuff in her pack. With so many people working outside the perimeter of the now-defunct quarantine ring, it was easier to slip away. But the clothing and supplies that had seemed plentiful when they had been weighing down her pack those first few days had actually been pathetically inadequate.
She had hoped to live free somewhere she didn’t have to pretend to be who she wasn’t. Instead, she was going to die free.
“I-I d-d-don’t c-care,” she muttered mutinously in the darkness. Her teeth clicked together as they chattered. “St-still worth it.”
A soft “woof” from outside the house had answered her, followed by a low growl. She jumped to her feet, scrambling for the thick, heavy branch she kept beside her as a makeshift weapon. The Clean Zone had dogs, of course, but outside that center of civilization, dogs roamed in feral packs, along with wolves and coyotes. She’d heard them howling and yipping at night, and one sick, limping, and obviously starving outcast had even made an attempt to get at her supplies before the jerky ran out. That was when she’d started carrying the cudgel.
Unfortunately the cold, hunger, and lack of sleep had made her clumsy. Rather than retrieving her weapon, she tripped over it in the dark and landed with a loud crash. Through the dingy carpet she heard and felt the rotting wood of the floor crack. It gave way, the moldy, damp carpet tearing. Splinters jabbed and scratched her, ripping at her clothing, and Billie yelled before she could stop herself, plunging through the hole into the basement below.

You can find her self-published Impulse trilogy almost anywhere ebooks are sold, and check out her catalog of Riptide Publishing releases at their website.


Each commenter on this post will be entered into a drawing for store credit at Riptide. The contest ends 9/26/15. Be sure to leave a way to contact you (email, Twitter, FB), and follow the tour for more chances to win.